Somewhere along the past decade....companies woke up and realized that a fair number of people they were hiring (with new college degrees).....were not worth the money they were paying.  In essence.....they had a piece of paper from a well known school....but weren't up to the standards that you would expect.

So someone finally decided it was time to develop this test.....the Collegiate Learning Assessment.  Basically, some neutral organization would test you upon the completion of four years and look at your skills gained.  Values are put against critical thinking, reasoning ability, and problem-solving.  Then they'd even assess your communication skills in explaining how you arrived at your decision or solution.  Max is 1,600 points.

Basically, what the hint is.....your grade-point average might actually be worthless.  The hundreds of hours at some fancy university and $90,000 spent?  It might be of no value.  The fancy professors....well known in the education world?  They may not have contributed very much to your learning experience, and in some cases.....the local bartender probably taught you more on physics than the $150,000 a year professor.

Here's the thing....you don't have to take the test.  It's strictly voluntary.  But you can imagine HR departments of the top 500 companies in America examining this test and its results.  You wouldn't want to hire some idiot out of Harvard and pay them $75,000 the first year.....to learn six months later that they really don't know much and can't reason, think or problem-solve.  In fact, if you did hire the low-average test kid out of Harvard.....you give him a dose of reality by only offering a $45,000 salary situation.  He'll laugh and walk away.  Six months later.....he might come back to the door and admit that most all companies are leaning this way, and he really wasted four years at Harvard.

The purpose of higher learning....when you go back to the era before 1945....was to produce someone who could reason and develop an independent mind over all subjects.  The Greek philosphers were part of the 1800's university learning system, and you had to attend debate-like clinics to be able to graduate from any university in America.  Things changed as the GI-bill kicked in after WW II.  Colleges became Wal-Mart operations and mostly worked to take your money.....give you some gimmick tests.....lowered expectations.....and sent you off after four years with a piece of paper noting you graduated.

Where does this new test lead us?  I'm guessing over the next four years.....some students wake up a month after graduation and realize that a quarter of the companies they contact....want this test result.  And the kid merely moves around these companies because of the fear of the result.  Eventually, some university systems will offer four-class deal after you graduate....preparing you for the test.  So you spend the summer session after graduation.....preparing yourself via their extra classes, for this stupid test.  It's basically teaching you what they should have taught over four years....how to think independently, and reason with the information you have.

By 2025, I suspect a number of companies have come to this odd conclusion.....a Harvard graduate with a 3.5 average.....might be two steps under a University of Mississippi graduate with a 2.0 average.  The companies will pay some experts to explain this to them, and then start to wonder if they've been screwing up and hiring Harvard folks when they should have hired Mississippi folks.  You can imagine this scene at a major company, and fury being leveled at Harvard for worthless degrees and graduates.

I would even ponder that some university will eventually grasp the issue, and offer what they say is a traditional education with 1800's values.....basically teaching you to think, reason, discuss, and problem-solve.  Four years of something that no university in America offers today.....yet what every single university in America offered in 1885.  Plato would be discussed.  Problem-solving classes would be the norm.  And you might sit in a school pub with an ale.....discussing the wisdom of Socrates, rather than NCAA football programs.

The bottom line?  You could waste $90,000, four years, and a stay at upscale fancy school....only to find no one wanting you for the price you quote.  All because of a fake education, fake grades, fake tests, and fake professors.  Meanwhile, some dimwit with no college time or university degree....could take this test, and likely max out on the 1,600 points.  Yeah, it's a bold new world out there.
at Tuesday, September 03, 2013 No comments:

I tend to read the Wall Street Journal a good bit....to some degree because of business news....but also for investigative news from around the world.

Yesterday, there was a piece by Charles Levinson...."Islamists in Egypt Blame Their Leaders".

It's an interesting story.  For months and months....if you watched CNN, Fox News or any of the big news networks.....there was the mention of the Muslim Brotherhood.  Usually, most folks avoided going into detail about the Brotherhood (which has been around for at least seventy-odd years).  The Fox News folks tended to paint them as evil and one-step away from Nazis.

What Levinson reports....is that Egypt went into non-Murbarak period, and the Muslim Brotherhood swept into national politics in Egypt....there was this hint of two brotherhoods.  And as months passed, the division became more of a problem.

You've got the old dudes, who tend to run the entire Brotherhood.  They talk rhetoric....chaos.....and want everyone lined up to support their agenda.  Then you have the younger dudes, who ask questions, would prefer a balanced approach to politics and life, and consider the older leadership fairly dim.

So as the weeks passed, and the older guys ran at turbo-speed toward their agenda.....the younger folks just stood there and kept making comments.  You could consider them merely comments, or just plain warnings.  The emphasis was that the end result would be a mess.

Well....the military moved in....shut down the Muslim Brotherhood government, and the older dudes in charge were arrested.  The younger guys?  They are standing there now and saying "we told you so".

I suspect you are about to see a division occur.....with two Muslim Brotherhoods.  The older guys will be resentful and continually trying to bring down the younger movement.  One movement versus another.

After a while, you realize that most movements....from the Republicans and Democrats.....to environmentalists to country and western music....have this continual fight.  The older generation versus the younger generation.  The communists had this same issue.  And even professions....like doctors....have the problem.  Farmers even have the issue.

Half the time, we barely notice this discussion or issue brewing.  In Egypt, I imagine the older guys kept thinking 'these-punks-what-do-they-know'.  And now?  Sitting in prison, I imagine the older Islamic Brotherhood guys have plenty of time to contemplate what the punks said and maybe they were right this time around.
at Tuesday, September 03, 2013 No comments: 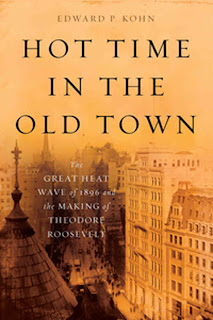 Hot Time in the Old Town, by Edward Kohn.

As a kid sitting in American history classes, I came to note that between 1865 and 1913, there rarely were more than fifteen pages of history....a third of that related to drawings or pictures.  Rarely do you get any real detailed explanation of the period, and so gaps exist.

This book covers 1896, the massive summer heat-wave, the results of the primary, and the actions of Police Chief of New York City Teddy Roosevelt.

Teddy has yet to really get any national attention and has been more or less punished by the party apparatus for being too difficult (probably too-anti-corrupt as well).  So the best public service job he can get at this point in his career.....is the NYC police chief.

The heat wave is the backdrop to the entire book.  For environmentalists, it is a shocker.  Over 1,500 people dead in the city over this ten-day period.  Thousands more across the US also die.  Kohn weaves dozens of personal stories into the book.  Some folks are barely off the boat from Germany for a week, and they die from heat-related stress.

The meat of the book goes into William Jennings Bryan and his pumped-up arrival in New York City.....for the speech of speeches.  He is likely set to win the Presidency.....if this speech goes like dozens of others that he has delivered over the earlier part of the summer.  The Democrats have pinned their hopes on a younger guy, with the only national topic being the silver exchange added to the gold exchange.

Bryan has spent days crossing the US and giving speeches....as the heat wore on.  He's tired.  He's exhausted.  And he's likely near collapse as he arrived in New York.  He should have taken five days off and found himself a cool shade tree with ample ice water.  Instead, he walks into the arena to deliver the big speech, and gives a one-star performance (half the audience is gone an hour later when he wraps it up).  Newspapers note the poor performance.

The better part of the book?  The mad dog stories.  You can imagine this scene, where dogs are all hot, tired and frustrated, and starting to act funny (like people would), and everyone is convinced it's a sign of a rabid dog.  So the cops are called and they start shooting dogs.  It's hard to say how many times this occurred.....but I'd take a guess that at least two dozen dogs are shot on the street over the ten-day period.

So if you had a curious nature over the late 1800s, and a brief run-down of Roosevelt's younger years.....this is a great book.  It reads easy, and you can wrap it up in a week.
at Tuesday, September 03, 2013 No comments: