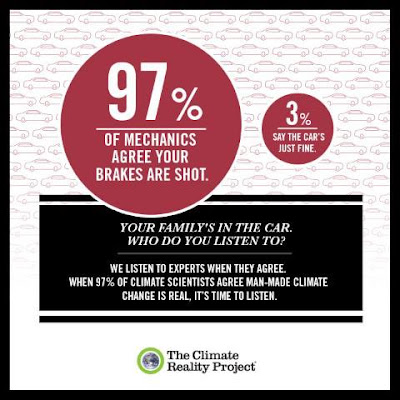 It's a poster by the climate change, global warming, global cooling crowd.

So you pause and ponder over it.  Basically, they are trying to simplify the whole topic and just say that you accept what your mechanic says without challenging him....so why not just trust us?

You pause for a minute, and then you respond....your mechanic can take off a tire in sixty seconds, and show you the braking mechanism.  He can show you the pads, and you can be pretty sure after looking at the evidence....he isn't pulling your leg.

This climate change dimwit?  Well....if you asked him to remove the cover to his database, and go into some various details.....with in-depth questions....and you wanted to be absolutely precise about things....he'd get all upset.  That wasn't the deal....in his mind.

The problem here is that the bad brakes and the repair job would likely only run $500 to $1,200.  This climate change guy?  Well....he's not into one single brake job.  He's talking about years and decades of you accepting more costs, increased airline tickets, your electrical bills going to double and triple of what they are currently.

When you note this, and try to explain things to the climate change guy.....he usually acts like it's just money....nothing to worry about.

That attitude usually bothers some folks.

So this brings me to this final topic.  Folks discuss this occasionally.  Mechanics....are generally not that honest about your car and what might be wrong.  So they tell you about five things, and the $1,600 bill.  The truth?  Well....you aren't sure.  It might be one serious problem existing and $750 to fix it.

Some folks are hinting....strongly....that after this big trip to Europe....the President will return and prepare an address to the US public for some evening episode (likely to be in ten days).  The topic?  Syria and the war vote.

Prime-time TV, and a Syria pep-talk?

Toward the end of 2009, the networks finally got tired of a continual knock at the door, with a request for air-time for the President.  So they finally just said that they'd had enough.  If he needed some time for once or twice a year....fine.  But they were finished with these free-deals.

You see....every time you allow a Presidential address on prime-time TV....it's free.  The networks all lose money.  The amusing part to the story is that cable TV networks...like Discovery or the History Channel run their show, and usually capture higher numbers.

The interest across the nation to hear the President speak on Syria?  A guy can sit and ponder on this.  I'd have doubts that you could convince more than fifteen percent of the nation to watch.....and it could be as low as five percent.

Changing minds or perceptions?  The news media has had ten days now to blast away with its various bits and pieces.  They really haven't been successful, and I'd take a guess that sixty percent of the public is "no" on the war idea. At best, the President might have twenty-five percent of the public in some supportive way.

So we come back around to prime-time TV and a Syria pep talk.  It's hard to imagine that the President could find something to fill up thirty minutes of time.  He'll stare at the screen....repeat some pet phrases.....talk up the morale standing of America being the protector of the world....and then toss out some FDR, Reagan, and Jefferson quotes.

It'll be like a pep-talk from high school football coach at half-time....where the score is 60-to-7 against his team.  There's not much you can say....to pep folks up.

The Senate and House will sit there in a daze....mostly hearing negative talk from back home.  Amusingly enough....it'll be the only time in ten years that you have both Republicans and Democrats agree on something.  Some dimwit from CNN will comment on the strange nature of this one agreement between the two parties.  Standing against the war.

After almost five years in office, this is a curious moment to note the administration's position, and failure to get public sentiment on their side.
at Friday, September 06, 2013 No comments:

I worked for an organization once....that had one central server.  There was one individual who was supposed to back up the server twice a week.  All of the previous individuals who held the job....did it without any issues.

About a month into the new server person taking the job....something happened with the back-up device.  It basically fried itself.  The back-up individual simply made a one-line statement on an email and that was the end of the emergency.

Days passed.  Weeks passed.  Months passed.  One day, we woke up and found server issues.  We knew it was four years old....and we felt safe because of back-ups. Well....two hours later....Airman Snuffy who was the point on fixing the server went to Sarge who was the back-up boss.

Things kinda fell apart as we realized then that nine months had passed without a single back-up.  The server at this point was so corrupted.....that it just wouldn't allow a back-up to occur.  Basically, all data stored over nine months....was to be lost.  In the Air Force, this is a big deal.

So we had this one contractor who spent hours and hours....coaching the broke server to give one last bit of life into a back-up action.  From 7AM on one day....until 4AM on the next day....he got the system to do one final back-up.  He probably deserved a cash prize from the Air Force for saving the day.  I can understand the Delbert cartoon to the fullest extent.
at Friday, September 06, 2013 No comments:

If you measured up my Syria-enthusiasm....it'd rank at the same level for moving to Dolphin Island, Bama.  It's a nice thought for sixty seconds, reality kicks in, and I come back to the real world.

The players?  You've got dozens of rebel factions, some Muslim Brotherhood gangs, some Islamic radicals of an unknown nature, some Russians, some Iranians, and Al Qaeda goofballs all mixed into this business.  Even if you picked some option to help Syria....who exactly are you helping, and what does this relate to in terms of a long-term screw-up?

Then I come to this fascinating thing about refugees.  The Wall Street Journal's Nour Malas wrote a two-page piece that really dug into the simplicity of the Syrian people today.

Two million Syrians (out of 20 million residents)....have left the country, period.  They've gone mostly to Lebanon, Turkey, Iraq, Jordan, and Egypt.  Toss in another twenty countries around the region and Europe....and those two million are completely out of sight.

Four million additional Syrians have left their house and town....but stayed in the country.  You could say they just don't have options, but they really don't desire to leave the country.

The UN guys figure 5,000 Syrians leave the country on a daily basis....mostly walking or driving out.  It's not a realistic number but in this kind of business....guesses are acceptable.

You put this into a prospective.  Folks in Bama get into a civil war.....maybe over wet-dry issues or just Republicans versus Democrats.  Mississippi wakes up to find 350,000 Bama folks at sixty different towns in their state....and there's some fear of disease, radical Bama NCAA politics, and questions over sanitation.  Over in Tennessee, there's 150,000 folks in five state-camps, and massive hostility brewing over how long they can allow Bama folks to stay.  In Florida, around a million Bama folks are sipping Florida orange juice and talking long-term stays....possibly changing the political landscape of the state forever.  Georgia?  They took in 50,000 Bama folks and drew the line at allowing anymore.

How long can you allow an exodus like this?  No one has written a study or done an analysis to explain how people adapt after a while, and just give up returning to the homeland.  After three or four years....folks are mostly settled.  They don't like moving again.

So, it's a four-star mess.  The news media likes real-life soap opera action.....with interviews, wannabe journalists walking around refugee camps, retired general so-v-so talking over his personal strategy, some Harvard professor explaining Syrian politics, a Muslim guy noting why Syria is so important in the world, and various polls telling you something that you don't really care about.

Toss in a President who prefers campaign episodes and fighting Republicans more than dictators, a Congress that is more focused on budget issues than war, a Secretary of State who mostly makes appearances and waits for White House orders, and comedians making more sense on war topics than dimwitted political idiots......and you've got a story about nothing.

Yeah, in short, it's time for NCAA football, and the rankings war.  That....is about all we can absorb at present.  Syria.....is more or less a lost episode of Bay Watch....you'd watch for the action thrills, but otherwise, you'd just flip the channel to the Amish Mafia show and see if there's trouble brewing on the farm.
at Friday, September 06, 2013 No comments:

As a challenge once, Hemmingway wrote an entire story with six words.  That was it.  He left to be viewed in hundreds of ways.  It was enough....in his mind.

The Gettysburg Address....is rough 270-odd words (depending on the version).  Some folks in the audience felt shock.....the speech ended in a matter of minutes.  Lincoln thanked the crowd, and left.

The Social Security Act of 1936.....took 64 pages.  Just enough to get a point across, and allow some dimwit Senator the time to read the entire thing in one weekend.

George Orwell wrote Animal Farm to the length of 176 pages. Today, it's the basic introduction to Communism that any kid can pick up at age twelve and finish in a weekend.

The Bill of Rights?  It's a grand total of 462 words.  A person can read this section of the Constitution in ten minutes.

The most emotional fare-well speech ever given?  By the Yankees Lou Grehig....1033 words.

The blunt truth is.....you can get across a very direct image or vision....with a limited amount of words.