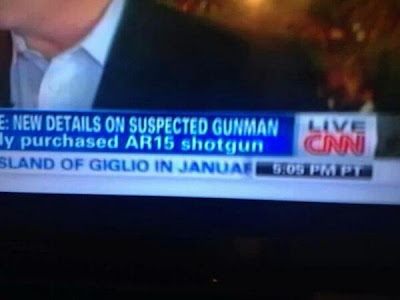 Over the past fifteen-odd years....I've come to regard CNN as mostly a bunch of amateur guys....with some kind of journalism degree from a university....with mostly knowledge about journalism, and not the real world.

In the midst of the DC shooting yesterday at the naval yard....the CNN dimwits put up a text piece on the screen....letting you know about the "AR15 shotgun".  Well....there is no such thing as a AR15 shotgun.  If you asked any Marine or Army guy....they'd just look at you in amazement.  They wished that the gun guys would make a fancy high-impact-like AR-15 shotgun.....but that won't happen.

CNN does the best they can.  They sign up folks who will work cheaply.....recruiting from TV stations across America.  Basically, if you look fresh, perky, dynamic, and speak without any accent.....you got a chance with the CNN folks.

Trusting in their storyline?  My general advice is that when an event starts.....CNN gets their guy on the scene first ahead of everyone else, and for twelve lousy minutes....they own the story across America.  Then the other networks arrive, and eventually half-an-hour later.....Fox News finally pulls up their van and releases the "dogs of war".    Thirty minutes after watching Fox News, you can turn the TV channel back to Gunsmoke and relax for three hours.  There's not much else to occur, until the smoke has cleared.

The other comical piece from yesterday?  CNN's one dimwit asked if this was the first ever shooting on a military post....ignoring the Fort Hood episode of two years ago.  Yeah, with the court case barely two weeks ago wrapped up.....you would have thought that this journalist would remember that.  Well....no.

Luckily for us.....the President learns most everything he knows....from watching the news.  So I'm guessing today.....he's asking his staff about this neat AR15 shotgun, and how it works.  Some White House expert will arrive, and spend thirty seconds detailing the non-existence of such a weapon, and then the President will walk over and turn the news channel back on....to get more fresh new prospectives.

It's roughly twenty-four hours since the DC naval yard shooting.  Course, I'm a thousand miles away and watching mostly CNN and the Business Channel for updates over this, and reading the various DC newspapers.  It's odd....the journalists are stuck on this one.....black guy (not a white-Mexican or doped-up white kid)....past claims of being goofy because of 9-11....said he'd been recently converted to the Buddhist religion....shoots a bunch of navy guys.  The international press wants to talk up the automatic weapons angle.....but you can sense that CNN is a bit confused and trying hard to not notice his race on this episode.  Sad event.....some nut case that the Navy figured out that he was nuts, but then they agree to hire him as a contractor security guy.

Some polling guys say that John Kerry is now pulling better numbers than President Obama or VP Joe.  Shocking, in a way.  Kerry hasn't done much....except appear in front of cameras, talk to some Russians, and pretend that he's an expert on international stuff.

California will likely pull up a ban (by the state legislature) on lead bullets.  Hard to say what's valid or fictional on their strategy.  Folks will just walk across the border to Oregon or Nevada to buy ammo.  Course, cops will stop folks in their cars and ask if there's a gun in it.....then charge you with having lead bullets.  The amount of lead bullets in the ground from three hundred years?  Well....it's best not to talk about that deal.

The Christian Science Monitor came up today and noticed it was the second birthday of the Occupy Movement.  To be honest, the boys from the Movement have lost most of their steam, and since late last summer....are mostly there on parade days or special occasions.  Occupy was probably supposed to be some political device for the 2012 election....but the folks running it came to realize that the public wasn't that interested or curious about them.  From the DC episode.....I kinda noticed that most locals were critical because of the rat infestation that grew out of the two camps they set up near the White House.  Tourists note stupid things like this, and talk via forums.  The DC city council eventually got bad feelings over the camps and their public viewing.

Finally, a week before the German national election.....the Green candidate for Chancellor has found himself in a historical mess.  You see....around three decades ago....as a university student and big-time player of a small-time Green Party.....he signed up that it ought to be legal in Germany for adults and kids to have physical relationships.  It was in the early days of the Green Party, and the general wording on the document he signed back in those days hinted that teenagers ought to have rights around age sixteen.  Someone dug around....no telling which party.....and found where this national candidate signed a petition for this change to the law.  He's done his best to explain what was going on thirty-odd years ago......but it's inviting some Green voters to reconsider their vote.  It might help the SPD folks a little.  Kinda sad to think some stupid petition that someone floated around thirty years ago....still exists today, and some idiot can find your name on it for public display.
at Tuesday, September 17, 2013 No comments: 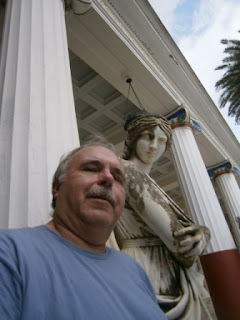 I was up at a big palace there in Corfu.....with a number of Greek Gods and Goddesses on display.  The gal next to me?  The Greek Goddess of Bacon, Pabst Blue Ribbon, and Ford Pick-ups. Well.....I'd like to believe that.

Greeks have this thing about Gods and Goddesses.   They've put up a bunch of statues and have various stories related to them.

I've come to this belief that Greek guys got to a point where eating olives, apples, and fruit got to being fairly boring.  Fishing all the time?  Boring.  Gulping down wine?  Boring.  Wrestling?  Boring. 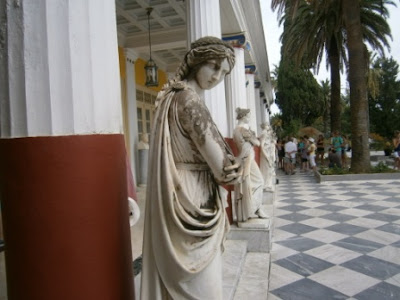 So they eventually reached a point where they needed more entertainment.  So they sat at the fire at night and invented various stories over fake characters.

Eventually, enough folks believed the fake stories, and got passed around to the royal folks because they were so bored.

A one-star likely turned into a five-star story over a generation or two.

So today, there's the goddess of persuasion.  Course, for me....I'd like to believe there is a goddess over bacon.  It'd be nice to think that some gal ensures the greasy nature and purity of bacon.

Bama guys just weren't meant to travel beyond the borders of Bama.  It's hard for us to take some things serious....as you can tell.
at Tuesday, September 17, 2013 No comments: 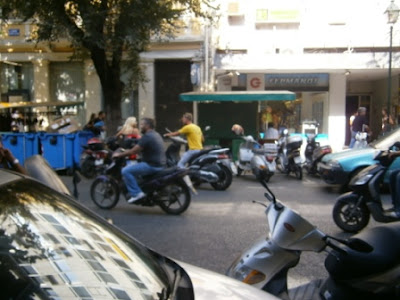 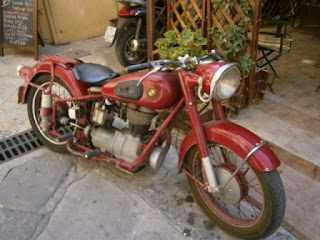 After a week in Corfu, you come to one or two conclusions about motorcycles.

First, most everyone on Corfu refuses to wear helmets.  Doesn't matter if it's on the big roads or on city streets.  Folks just ride and say the helmet is useless.  Doesn't matter.....men and women both have the same attitude about this stuff.

Second, there are a lot of old motorcycles around.  Most are of some European brand name.....probably thirty to fifty years old.

Some got painted up, and some end up as displays for small pubs and restaurants.

Maybe it's a good way to retire a bike that's beyond it's years and ought not be on the road.

Third, you come to this odd way of life on Corfu.  When you expire out on the street....dead....then they put a little memorial of sorts.  It's on a stand and be either simple or fancy. 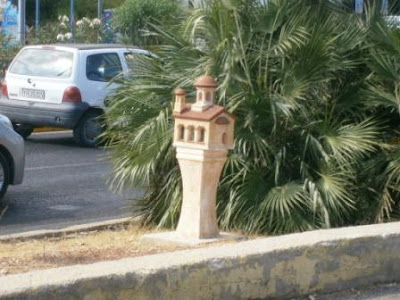 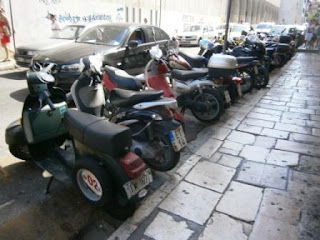 It's hard to say if folks come around to remember "Yinny"....dead from some scooter episode where he just didn't wear a helmet that day.

From the hotel into town.....there must have been forty of these little memorial stands.  Safe to say folks die fairly often from this business.

Fourth.  All around Corfu City....there's parking lots for scooters and bikes.  I'd get the impression that a quarter of the population use them daily. 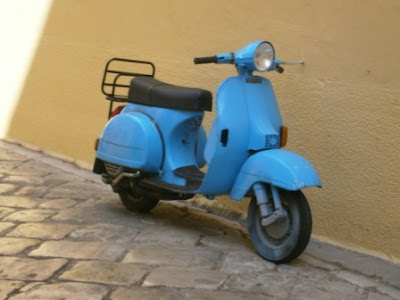 Fifth and final.  Old scooters survive on.  The blue scooter below has to be at least thirty years old.  It's probably been painted three or four times.  Several seats have come and gone.  Probably a dozen mufflers have gone onto muffler heaven.  And this is probably the twentieth set of tires on the bike since purchase.

The curious thing?  No rust.

After a week in Corfu.....a guy has this dream in his mind....living on an island for the rest of his life....riding scooters....tasting the breeze with no helmets....and feeling like a million bucks.

Maybe it's a good thing that you don't stay.  You might end up with some memorial on the side of the road.....dead after your scooter ran into a Coca Cola truck.