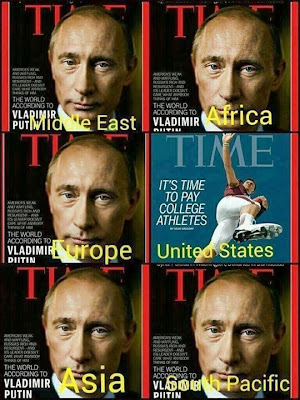 I'm not much of a Time reader or enthusiast.  To be honest, I probably have touched the magazine once since 2004.  There was a time in the 1980s when I read it religiously and had a subscription.

Time around the end of the 1990s....turned into some piece of trashy news journalism that mostly was a cheerleader operation.  They led the public and their readers to a singular point of view.

At some point, I just sat there and said enough....refusing to consider it much of a asset in terms of knowing the world, events, and where things are going.

This past week.....Time picked up the Syria mess that President Obama got stuck into, and went over the various options for it's front cover.  Most folks tend to think that whatever cover magazines have for the US....it's the same for overseas...like the European environment. Well....no, it doesn't work that way.

If you tell the entire story, from start to finish....you end up with Vladimir Putin looking pretty good, and President Obama looking like a college professor.  Adding to the misery....having a big picture of Vladimir on the cover really puffs up the Russian image a bit as you tell this story.

Time couldn't do that.

So Time issued this printing of the magazine.....with a NCAA football player in some graceful move.  Folks in London, Berlin, Paris, Istanbul, Moscow, and Borg, Germany.....all saw Vladimir.  Folks in Kansas, Charleston, Montgomery, and parts of the US.....saw the NCAA player.  You'd think by glancing at the cover that the big story was the NCAA.  Hidden inside was the Syria piece.  Fifty-fifty shot that you'd realize that by reading this entire long piece......that President Obama really screwed up in some ways.

A bunch of European folks will read Time....come to some radical conclusions, and shock their American friends a few days or weeks later.  A discussion challenge will occur where the European guy wants to talk up Vladimir.  The US guy?  Well...he'll say he read up on the NCAA football story and agrees that players ought to be paid for playing.

I'm guessing Vladimir is sitting there and laughing over this episode.  He probably had the Time cover made up as a poster and hung in his office.  Time's man of the year?  No....they can't give it to Vladimir....it has to go to the Snowden dopey guy.

All of this comes full circle.  The sad truth is that Time just couldn't bring itself to be a real journalistic operation.  When now.....when it's almost bankrupt and barely selling enough to stay in operation.....they just can't stay honest to the public.
at Friday, September 20, 2013 No comments:

This week, the church folks around Dresden (a major city in the eastern side of Germany).....got around to discussing this new tactic for sermons.  A number of the churches and ministers (various groups)....have decided to hype up and do some sermons over gays and homosexuality.

It's an odd deal.  What they want....is some public talk and discussion over the subject.  They don't really say what direction they want this to go....other than public discussion.  You get the impression after reading through things....they just kinda think that the more folks locally chat in their church groups about this....the more acceptance there will be.  It's a local assumption.....not based on any science or polls.

Now, you have to grasp these two simple facts.  Dresden is in Saxony, and is known in Germany for being fairly conservative to start with.  They might not measure up to the Bavarian standard of extreme conservatives....but they lean awful far that way.  Second.....Dresden is in the heart of old DDR.....the former East Germany, with religion and sexuality usually regarded in those days (like the 1980s) as taboo to discuss or mention.

So a Bama guy comes to wonder how these sermons will go.

Would you start off with the devil having physical relations with both male and female angels?  Well....no, you can't make up something like that.  Folks would ask too many questions.  Besides....everyone knows angels are only male-related.

You might pull up the Book of Samuel, and use a line or two over two guys who were real good friends, awful close, and often interpreted two thousand years later as two gay guys.  Course, you can't be sure over the Book of Samuel, it's true history of actual people, and what the writer meant when penciling in the text originally.

You can sense that the ministers involved in this project are going to stretch as far as they can.....to give some positive spin on this whole subject.

The odd thing?  Church attendance over the past twenty years in Germany has been declining.  Folks who regularly attended....are passing on.  New membership is lousy.  Some churches are closing down because they just can't fill any seats.  Some of the older folks are going to view this sermon move as wrong, and just say they've had enough....quitting.  In some ways, I view this effort as chasing out the last of the hardcore membership from the older German folks.

So, that's my  odd world in Germany.  Sermon folks on a mission.....trying to get folks hyped on discussions....religion more dedicated to changing public minds than providing the comforts of the church.  Yeah, a political agenda of sorts perhaps as well.
at Friday, September 20, 2013 No comments: