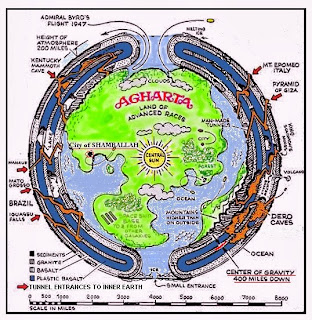 Ever since the Greek and Roman eras....there's been this mythical story passed around, which kinda fell into the same pattern as global warming and climate change.

The story focused on the 'inner-Earth'.  Basically....through a hidden entry point at the top of the world and at the bottom of the world.....you'd find Agharta.

The story progressed over the 1600s and 1700s.  At one point, there's an Italian who publishes a five-volume set (over 1,800 pages) of some true-life adventure of some brother and sister who wandered off into inner-Earth.  Folks bought into this....paid for the book.....found other friends who got into the story.....and would talk excessively about this hidden world.  Fake, but true, would be the perceived outcome.

In the 1800s, the folks who knew how to package the story continued on....making up fake maps which they'd sell at fake lectures.  You'd have the 'team' arrive in some town....post notices of a presentation....with a entry fee.  You'd pay and hear some guy talk for an hour or two, then offer up books or maps as your evidence to take home.  It's safe to say that few would show up to challenge the fake talkers.

Most of the Hollow-Earth Society wrapped up the game in the 1920s.  You could blame the depression era for taking cash flow out of the game, or just a lack of belief in the stuff....but Hollow-Earth came to a quiet ending by 1950s.

The number of Americans in the late 1800s who believed in this?  This is a curious thing, which you have no real idea.  Any sizeable town would have a visit by a 'talker' at least once a year.  A lot of guys would collect the maps and post them in the sitting room of the house.  Neighbors would come by, and an active discussion would take place.....over the fake inner Earth.

What gave the Hollow-Earth folks substance?  There's no other club running around to debate or dispute it.  Everything involved science or the unknown....so you had a vast number of the public that simply skipped over science in school, and had no idea of how to question the unknown.  Believing in the unknown....was easier than believing in the known.....a sad fact of life.

Comparable to global warming?  Yeah.  Statistics and charts are made for public consumption....with some cherry-picked data.  It's free for the public.....but with an agenda tied to it later.....society flips itself over at the call of some agenda crowd.

The sales job?  Instead of some 'talkers' going around in the 1800s and staging a fact session for public fees.....now, you get the story brought freely into your house on TV, in some publication, or via some college professor or dimwit who claims they have a degree.  The key to the new talkers?  They absolutely do not like or allow debate.  Why challenge fact?  Of course,  you could ask the same of flat-Earth society from the 1400s, which the Catholic Church strongly endorsed.  The Pope and his staff were wrong, but they tend to be wrong on a lot of things.  Why challenge facts?

Strangely enough, the Hollow-Earth philosophy survives on today.  Bigfoot is supposed to be part of the legend....along with a secret UFO base.....and aliens who quietly live in a big urban underworld.  There's probably a hundred thousand Americans who believe in this.  Books are sold, and talkers go around to pump up their base of believers.

As far as we've advanced in two thousand years.....it's hard to say if we've moved six inches on the naive scale of life.
at Sunday, September 22, 2013 No comments: