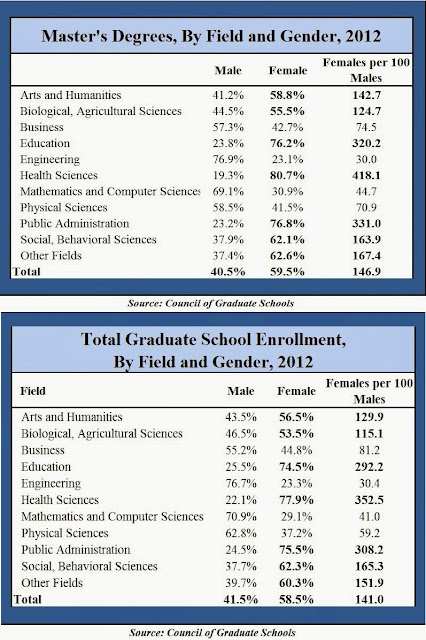 Occasionally, I'll see an interesting statistical display and spend some minutes pondering over it.

Today?  There's this listing of folks who study up for master's degrees, by field of study.  It's from 2012....so it's current.

So you gaze at it.  Women are moving into various fields....at a higher rate than guys.....pure and simple.  Well....except for two fields: math/computer science, and engineering.

You look at the numbers and come to a conclusion that these fields are flipping too well to female students.

Then you gaze at the enrollment of grad students, and it's basically the same story....no real advancement.

You can already predict in thirty years that the vast number of doctors that you come across by that point, will be women.  Most Public officials?  Women.  Most teachers?  Women.

But that engineering and math club?  It's male-dominated....even into 2030.  University leadership positions, support staff upper management?  By 2030, you can sense that it'll be mostly female leadership at colleges throughout the US.
at Wednesday, October 02, 2013 No comments: