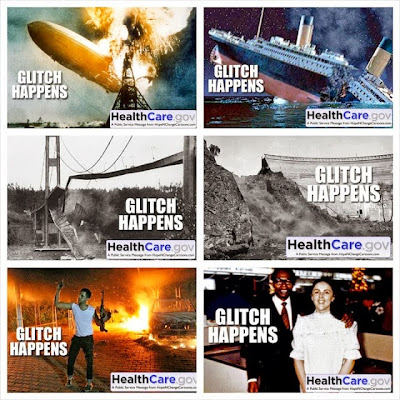 Glitch is the word that we've heard a lot about over the past two weeks.

Historically, the word experts say that it originally came out of Germany, and meant 'slippery' when dealing with modern technology....not always meaning computers....but anything modern.

Over the past thirty-odd years.....we've come hear it spoken mostly with computers and IT situations.

Glitches happen.....then they somehow fall into a solution phase....then finally, they are fixed.  We typically don't ask a lot of questions....just accepting the fact that our computer dude (Snuffy) rebooted the server and tweaked some package to work right.

Having grown up on a farm, I'm accustomed to glitches.  A glitch is where the baler had some issue with the twine and now it's all tangled up and you need seventy minutes and a pocketknife to fix the issue.  Or, it's when you bought cheap Indian-made barb wire and your cows discovered it's not really that sharp and they drag down the fence.  Or, it's when you bought such-and-such part for the combine....to discover that you put the part in backwards and ruined the $700 replacement item in sixty seconds.

Glitches can be uncomfortable and drag you down emotionally.  Hours and days could be wasted on a glitch.  Money could be poured down a glitch black-hole.  Experts from around your neighborhood could arrive at your doorstep to advise you on your glitch and how they'd rectify the situation.  There are foundations that exist today....mostly to settle your nerves on national glitches.

The amusing thing?  There are some folks who live for glitches.  Their passion for life....is a glitch.  They are engineer-like individuals, who marvel at a glitch, and how it developed from absolute nothing to a unstoppable force.  One could say that American society lives upon glitches today.  If glitches didn't occur, then the NSA wouldn't be able to view fifty million French phonecalls daily.  If glitches stopped overnight, we wouldn't be amused by the government and it's untidy way of running things.

So as the day develops and glitches mount.....don't get overwhelmed.  Glitches are a part of your life.  You have to remember this....somewhere in the great beginning, there was this little planet with a wobble, and a bunch of space rocks hit it.....with hydrogen somewhere in the midst of this mess, and a glitch of sorts occurred....where life on Earth would eventually settle.  We.....are a glitch....and mostly proud of that.
at Thursday, October 24, 2013 No comments:

It hasn't really been seen much in US news or such....but in Europe....it's an item in the top ten.  Saudi Arabia and it's King (the only guy who matters there).....are peeved at the US.  They've run down the list of goofy failures that they've seen the US make over the past five years.  From the handling of Egypt, to the Syrian threats that deteriorated into a treaty of sorts with Russia.  The King kinda feels that some promises were made and broken....which in Saudi Arabia.....your word is a vow.  Well....the Saudis are now looking at other options and putting the US relationship on the backburner.  For this week and this month....it doesn't amount to much.  A year from now?  This might come back to be a major problem.

The Germans are getting all peppy now since they found out that the NSA guys were possibly sneaking around and viewing traffic and calls to Chancellor Merkel's phone.  The Chancellor called up President Obama to get a reading on this, and the President assured her that she was not a target.  Course, when the NSA guys sweep.....it's absolute maximum and all eighty million Germans were dumped into a bucket.  Last week, it was the French President who called and got all peeved.  The Mexican President also has laid into some negative talk about his phonecalls.  At this pace, we might eventually get around to Tonga, and complaints that the NSA was sweeping Tonga's King's calls.

The bigger problem of the health care mess?  Even if the mandate is delayed....thousands of current healthcare policies are being cancelled per week now across the US.  These are policies which no longer meet the government's "standard".  All of these people need to find a new policy by 1 January....which is barely ten weeks away.  In the bigger sense of things....they really needed this stupid software platform to work.....guiding to the best and cheapest policy possible.  Now?  They more or less have to browse on their own.....ask stupid questions....and work up a major decision in the next two months.  It's not a pleasant situation to be in.

Finally, somewhere in the midst of the news....there's talk of 700 contractors who work for IRS, and owe roughly five million in back taxes.  No one is talking about firing them or suspending them....it's just that they work for IRS and owe back taxes.  I imagine if you asked the White House....they'd admit a dozen members of the White House staff owe back taxes as well.  If you asked CNN about their journalists.....someone would admit that a couple of the CNN guys owe back taxes.  The list goes on and on.  We might all be surprised to find that ten percent of the nation owes back taxes.
at Thursday, October 24, 2013 No comments: