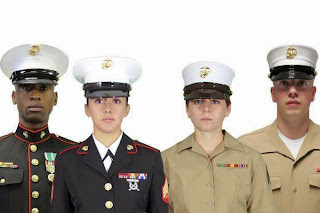 I'm not much into hats.  From my Air Force period....I hated every hat ever issued....except the jungle hat I got in Panama.

This week, the Marines announced they are reviewing this radical idea of taking the Marine female hat, and making it the standard for Marine guys.  You can imagine the dramatic discussions going on, and how the older Marines are just hostile over this idea.  Marine historians will point out....in the 1800s....the female hat was standard for a while, then in the 1920s to the 1940s....the Marines went to the Army style.

From the picture, you can note the old style, and the suggested style (on the far right).

I've sat and paused over this idea and will offer this wisdom.  Personally, I think there are two other options which the Marines ought to consider. 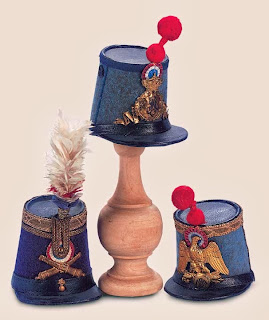 First, I'm awful partial to the old Hapsburg empire military hats....with the long stove-pipe appearance and the fancy feathers.  Our Marines would look awful sharp and unusual in such hats.

The negative?  Well....you'd have to update the feathers yearly....with different colors for certain folks, and we might have to kill a whole bunch of different birds....to achieve the commercial success or failure of this.

The other negative is that a bunch of folks from Bama would get attached to the Hapsburg hats, and would start to wear them....instead of University of Alabama hats or Braves hats, or John Deere hats. 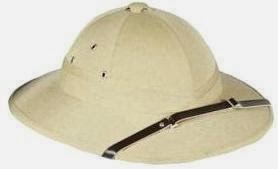 So, this brings me to option two....the old Jungle-Jim hat.  It's a neat hat because it works in summer or rainy periods.  It's tough and would last ten years easily.  If you got into a bar fight.....no one would crunch a beer bottle against your head.

We'd have to add a few symbols to it.  Maybe have it a slightly different color....like dark blue.  But you'd know a Marine from a hundred yards away.

My humble guess is that this is all just talk on changing the Marine hat....is mostly because no one has much to discuss during regular duty days.  Marines used to tell dirty jokes all day long....but that's gone.  Marines used to go into detail about combat but PTSD hampers them from discussing stuff like this.  Marines used to talk about Mexican hookers, but it's all bad now to discuss such affairs.  So hats.....just hats.....are easy enough and simple enough to get all heated up about.

Years ago, in my Air Force period, I worked around military and contractor software programmers.  I'm not a techno geek, a IT wizard, or science guy.  I'm a farm kid that grew up, watched jeopardy, read a thousand-odd books, attended a couple of universities and colleges, and learned to appreciate Bama common sense and logic.

For some reason, I fell into the programmer crowd and their taste for logical statements.  You can't be into software programming....unless you grasp logic and how it must pass a logic test, or it fails.  Software is written to meet conditions of A, B, and C.  If you introduce D.....it fails.  If the software has a glitch with B, it fails.  If the statement for A is incomplete....it fails.

For me, this was great company, and an enjoyable period....where logic was tested daily, and things tended to work.

As the last couple of months have unfolded with the healthcare business....I came to realize this odd story sticking out in the business arena.  National press media...like Newsweek or CNN....would not likely touch this story.  Even Fox would just leave it to the side because it's not fitting into the normal list of topics.

You see.....as the program software writters got deeper into the healthcare platform....they came to this odd logic versus illogic problem.

The law states that you can't charge older folks more than three times what you charge younger folks, for health insurance.  If Karl Junior's insurance rate is $100 a month, then you can't charge Uncle Donny more than $300.  Well....Uncle Donny generally costs more than $300 a month.  So you had to invent a gimmick logical statement in the computer that says you will articifially raise Karl Junior's insurance to a point where it's fitting into the law's requirement.  Karl Junior might only need $1200 a year for health insurance by the old model....but because of the law and Uncle Donny....Karl Junior now must by $2400, to meet the 'three-times' rule of the law.

The program guys saw this and had no problem in writting a software code that met that situation.  As you can imagine.....there's likely three hundred lines of code (unknown to the precise amount because the gov't won't admit that)....so it's not exactly a simple tasking.

The code guy finishes that and pats himself on the back because it works.  It might not be smart or logical in the business world....but the code guy can make it work on the computer.

The software guys stood there and observed the two laws, as written.

Then they said.....they can't write a software code for the smoking deal.....if the code exists for Uncle Karl to be limited to three times the cost of insurance of Karl Junior.

This would all work fine....if you just said all smokers pay some additional fee of X dollars.  Or if you'd said that old and young smokers are basically the same creature.

This all came out in late June and nothing much has been talked in open media over the fix.  I doubt that any fix has occurred, and the one or two guys assigned to the smoker code are just standing out back of the building.....mostly smoking Camels, discussing NCAA football, and sipping Dr Pepper.  They can't fix....what is unfixable.

Software coding is a unique skill.  I came to note after a while that all code-writers are logical folks.  They generally all watch Star Trek and Stargate.  They sip a lot of Mountain Dew.  They generally all brag about the college project where they wrote thousand lines of code for a program that picked a NCAA March Madness winner or predicted the outcome of a marriage between Wonder Woman and Superman.

It's a fair mess, but somewhere out there....there's probably some guy who could splice together a 300,000 line software code to balance the perfect nature between old guys and young guys, with old smokers and young smokers.  And yeah, it might even include a way to register to vote....in six different states.  It's all logical.
at Friday, October 25, 2013 No comments:

Reports from our guy Snowden.....who sits comfortably in Russia....indicate that thirty-five world-leaders were spied upon by NSA.  The comments are in simple fashion....that around 2006....the NSA asked US government officials if they had any important phone listings, and someone ended up giving their special list of numbers direct to world leaders (thirty-five of them).  So begins this chapter of NSA collections.

What you can surmise from this....is that the NSA likely has the number of each of the thirty-five, and knows the 500-odd folks who rountely call that number or the 500 that the world-leader calls.  Likely the end of the story.  You can speculate about the rest of the story.

The event likely works this way.....some oil baron is working up a deal and gets some  important VIP to cough up the number to the President of Brazil.  They call in....reference some code or important connection...and get five minutes with President so-v-so.  If the President believes in the project....they pave the way.

The NSA guy looks at the calls of today....notes this new caller, and works to identify it to some oil baron.  A case file is established and folks eyeball what the oil baron is working on, and the fact that he probably has the blessing of the President to proceed.

If you were President of the United States.....you could walk into a meeting with several American oil barons, note that you have privileged info, and "sell" it for some deal.  The American oil baron calls up this other guy.....notes that he heard about some deal and wants a piece of the action.

So begins.....this comical new way of using intelligence, for commercial gain.   The truth is....the NSA guy never sees this end of the funnel and if he did.....he'd question the whole logic of running this type of operation.

Who else does this?  That might be something of interest....but obviously Snowden doesn't want or think it's of interest.  If a dozen other countries are doing the same thing.....then none of this spy-upon-spy business matters.  The fact that a hundred-odd countries in the world operate some type of intelligence efforts....from crude to modern.....ought to make you sit there and think about the massive nature of things.

So as you sit there tonight and call your cousin Larry about this septic tank issue for the fourth time in a week.....you might want to think about the idea that the Russians, the Chinese, the Israel government, the British, the French, the Germans, the Japanese, the Italians, and the Swedes.....might all be collecting your data and listening in on the conversation.  Maybe it doesn't matter.....but if Larry is hostile and anti-French.....it might not be a good clean database entry on you and cousin Larry with the French folks.
at Friday, October 25, 2013 No comments: