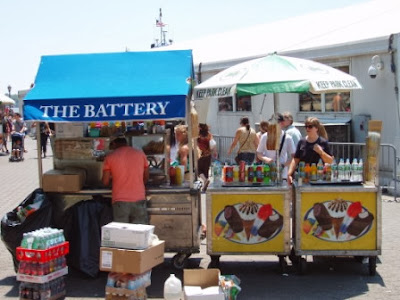 Back in the spring of 2010, I ended taking an entire day and walking around New York City.

Most guys from Bama have this fantasy of New York, and just wandering around.  We don't know anybody there.  We can barely name eight places to go and see.  But we tend to have this rational loss of fear when it comes walking in the midst of Manhattan.

I came to find the Battery down by the bay to be some magnet for tourists.  Vendors sweep through and have all kinds of stands to sell you cheap ice cream or sodas....which you really need on a hot day. 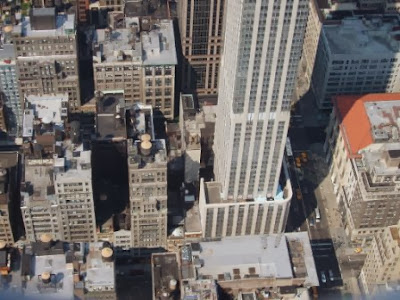 At some point, you wander over to the Empire State Building, and discover they charge you around $35 for the elevator ride.  You feel like a dope paying that much money, but you can't claim nothing much for such a trip, unless you've been to the top.

The view?  It's a million-dollar view, and a guy could spend hours up there and gazing off at the streets and traffic below. 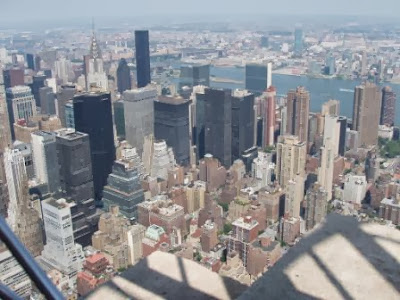 A guy will glance down at the top of the roofs below and wonder who does maintenance....if any gals are sun-bathing.....and anyone ever camps out on the roofs?

It's curious from all the Seinfeld episodes....there never was an Empire State Building episode.  Course, you'd have to wonder if George met some damsel from Dallas for the day and fell deeply for her....before finding out that she was going off to some Swedish cruise ship for a year. 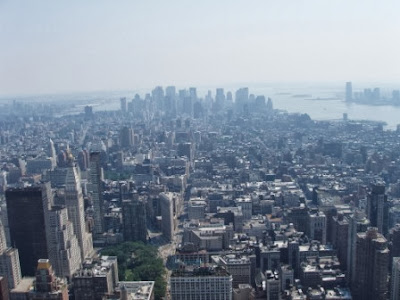 New York City is not for wimps.  You need to think hearty thoughts, and prepare yourself for just about anything....from a parade, to some robbery on the street.  I think this is the prime reason that most Bama guys fit in so well for short visits.

Grand Central Station is one of those things that you need to walk by.....jump in....have something to sip....and then walk out.  It's probably not the enchanted place that it was in the 1940s.

Tourist-magnet?  Well, that's one of the problems with the city now.  It's like Venice or London.....too many folks there for touring, and all dressed like some guy at a Fourth of July parade. 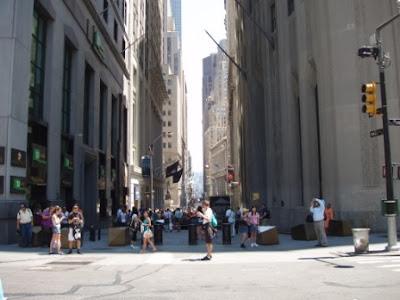 Wall Street?  You need about an hour to run through....pet the bull statue, note the fancy walking area through the district, and see what needs to be seen.

Every Bama guy ought to take three days off in his life, and ride the plane up to New York City.  You don't have to tell your church minister, or admit this to the guys at the shop.  Ensure you got some extra t-shirts, decent walking shoes, a sock with fifty quarters to whack on any robber, and a hat to identify yourself as a foreigner in their midst.

Once you return, you got it out of your system, and life gets to being a bit easier.  Well....until four or five years later, and you get that thing in your mind again....running off to New York City
at Wednesday, November 13, 2013 1 comment:

The Life of Ed

Reports today indicate that Ed Snowden....our NSA dude in Moscow....is running rapidly out of capital.  In other words....he's getting pretty close to being broke.

What the journalists will say is that Ed's lifestyle, security, and basic requirements of life cost a good bit.  What he had to start with....is mostly finished.  He's relying a good bit off donations from oddball foundations that seek to help Ed.

The average monthly cost to Ed?

I'd take a humble guess here.  He's likely got one guy on twenty-four coverage to protect him and drive him around town.  Figure a minimum of seven thousand bucks a month for that kind of security in Moscow.  Toss in rent....maybe a thousand for a decent place with power and heat included.  Food and beverage....another thousand a month.  So Ed needs roughly nine thousand a month to get to the minimum in life.

Ed's talker seems to indicate that Ed has a job and makes some income.  They won't say the company or type of work.  I'd take a humble guess in Moscow and say he's pulling around four thousand dollars a month for that type of work.

Ed's entire system of life....revolves around the charitable efforts of dozens and hundreds of people.  They convince various well-off hardware and software enthusiasts to donate to a site, and they work to move the cash to Ed....likely in the form of debit cards and such.

How long can Ed survive like this?  It's an interesting scenario.  Ed's life isn't exactly a paved trail or leading to any type of social security situation.  Ed is thirty years old.  He might be able to get in on the Russian social system....but that'd likely amount to the equivalent of one-hundred-and-fifty bucks a month, when he turns sixty-five.

I imagine that Ed now sits around at night, grumbles about the living conditions, the food, and the lack of any real friends. Ed probably reviews how the bills will be paid, and he can ever get into a regular routine of owning a house, taking a vacation, or grilling a steak in the backyard.

Ed doesn't worry about replacing his septic tank, clearing the roof of leaves in the fall, or planning his Black-Friday shopping strategy.

Ed is likely thinking long and hard over the next step, and how it's got to be a front-page item.  Attention was something that he enjoyed...for a fleeting moment.  Now?  He's mostly a page five item, and always waiting for the CNN crew to arrive and interview him for Piers Morgan's show.

This is the life of Ed.  Money short, life on a stick, and chaotic planning accepted as normal.  It's as good as it gets.
at Wednesday, November 13, 2013 No comments: