It's a Wonderful Life Sequel?

Yesterday, I came across this entertainment piece of news....some Hollywood producer thinks that he has a decent script and is about to embark on a sequel (modern-era piece) for It's a Wonderful Life (the Jimmy Stewart classic).

Within my list of twenty-odd movies that I consider classic and of a high value.....It's a Wonderful Life makes the cut.  Simple story....four-star acting....stirring moments throughout the piece....and an ending that ties all the loose pieces of the story.

To be honest, it's hard to think of an sequel that did justice to the original.  The only exception is the modern version of True Grit, which tells the story in a slightly different way than John Wayne's version.  To watch one, you really have to pack the other version to follow, and enjoy the tale in both versions.

There are some movies that just can't be remade.  The Philadelphia Story.  North by Northwest.  The Grapes of Wreath.  The Searchers.  My Man Godfrey.  The Shining.  Young Frankenstein.  Casablanca. The African Queen.  The Dirty Dozen.

Producers and Hollywood never accept that logic of a movie that can't be remade.

Days, weeks and months will pass.....and we will end up with this sequel.  Sadly, it'll tempt us for a moment....we have to pay the eight bucks and see a three-star version of a classic.  And we'll wonder why we had to do it.
at Tuesday, November 19, 2013 No comments:

Under the front page of the 4 August 1897 Herald and Tribune (Jonesborough, Tenn) came the start of a paragraph for Cost of Food for Forty Niners:

If life was not all “cakes and ale” among the forty niners; if among the vast majority the menu was limited to “slap jacks,” “hard tack,” “coffee and beans,” occasionally diversified by an unfortunate jack rabbit or quail, whose misplaced confidence in mankind brought them too early to the pot of the hardy miners, neither was it entirely devoid of luxuries in living for those whose appetites were at a par with the financial ability to gratify them.


It's one sentence....you check it out closely.

In modern times, no editor would allow a reporter to write like this.  No college professor would accept as decent journalism.  No nightly news crew would lead into a story with this type of introduction.

A front page in 1897 was a mountain of information that would be discussed far and wide in the local area.  News didn't have to concern the local town or the county, or for that matter...the state.  The woes and sorrows of a bunch of guys a thousand miles away....would have been excellent reading material.

Guys would have gathered at the local general store, or the barber shop....commenting that they'd heard about the fine food out in California or the menu selection for the Forty Niner folks.

The problem with modern journalists.....is simply that you don't have people who observe and report in precise words what they see.  The age of Hemingways and Steinbecks.....are long gone.  We end up with Larry who graduated from Duke with a degree in journalism, and fixated on slanting an item to fit the agenda.  Or you get Gus who graduated from Columbia University with a degree in journalism, and he spends his evenings chatting with folks who give him bits and pieces for a story next week on something.....that he knows mostly nothing about, and never questions the bit or pieces.

We are stuck.....in some marginal era of journalism.  And we've accepted that as normal.
at Tuesday, November 19, 2013 No comments:

The Polling of America 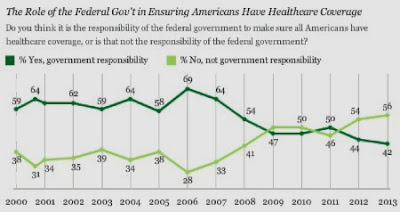 I hate polls.  They tell a story, but the story is only valid for that day or that week.

You see....people change their minds....like their underwear.  If you asked a guy about a certain store in town this week....in twelve months...he might have another differing opinion.

So, here's this polling data chart to ask folks.....is it right to assume that healthcare is a federal government responsibility?

Back in 2006, almost seven of every ten Americans said 'yes'.

Somewhere in 2009....that dipped to five out of ten Americans agreeing on this responsibility.

Today?  Barely four out of ten American agree it's the government's responsibility.

By 2024?  It'll all be forgotten and we move back up to sixty-five percent.  That's the problem with polls.  They drift, change, and slide.  It'd be hard today to convince sixty percent of the country to run off to Europe and fight the Nazis.  It'd be an issue to convince folks today of spending hundreds of billions and send four guys to Mars.  It'd be practically impossible to convince the public to accept taxes on internet sales.

We are a society that changes our minds and perception....on an hourly basis.  And frankly, we aren't agreeable to stick with an opinion.
at Tuesday, November 19, 2013 1 comment:

A Good History for Reading

If you have ten minutes and enjoy a short piece of American history, then I'll suggest the WDOT story over the Narrows Bridge in Tacoma, which collapsed in 1940.

The Narrows Bridge was erected and functional in the spring of 1940.  Even from day one....the construction crews had some bits of worry over how the bridge reacted to wind.

The bridge stood for roughly 200 days, before collapsing over the stress of wind.  Interestingly enough.....no human died from the collapse.....just a dog.

Six million 1940 dollars were spent on it's construction.  It was a toll-deal.....never recovering it's money, and a loss for the state.
at Tuesday, November 19, 2013 No comments:

Sometimes....you look at a story, and you just can't see any truth to it.  And sometimes....you can sense that things are about to unfold in a lousy miserable way.

The Times of Israel.....has printed up a story that the Obama Administration has been in secret talks with Iran for at least a year, over the nuke business.

Some news media sites out of DC are simply avoiding the story.  Some are picking it up and asking for talk from the White House....who says mostly nothing.  Internationally, it's tossed around on page two of most newspapers, and they are asking themselves....if this is a bogus story, or another 'work of wonder' from the Obama Administration.

Jarrett knows next to nothing on nuclear energy or nuclear weapons.  What she knows....amounts to the same knowledge that your barber has on nuke weapons.

Jarrett's experience at dealing with Iranians?  No one can cite any insider knowledge or past accomplishments.

In some ways, I'm hoping it's a bogus story.  If we suddenly find out about some treaty being worked, and it all comes back to Jarrett....no one much in the international community is going to buy on the legit nature of it.  It'll become joke number forty-four of the administration that the French laugh over.
at Tuesday, November 19, 2013 No comments: