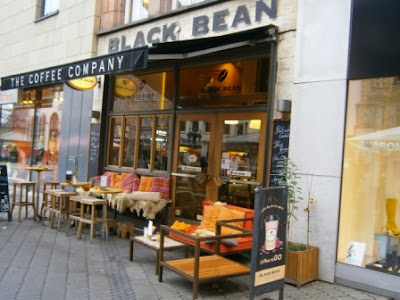 Twenty years ago, if you'd told me that coffee shops would spring up and be on every street corner....I would have said "never".

I've come to travel through dozens of US airports, walk through different US cities, and literally hundreds of European towns.....mostly amazed at the growth of the coffee shop industry.

Sometimes, it's the name that matters (Starbucks or Java Hut).  Sometimes, it's just plain good coffee.  Sometimes....like in the case of this coffee house in Nuremberg....it's the chairs and atmosphere on the street.

The business growth of coffee shops is what amazes me.  Rarely do you see a coffee shop failing.  I suspect they aren't big-money makers....but the majority are making some kind of profit.

It's almost like a bar atmosphere now.  You notice two people meeting.....two guys or two gals.....they sit and talk over a cup of coffee, and then leave.  It's like the old days in a bar or pub, except now....no alcohol is consumed in this effort.

After a while, I've come to believe that there is an addiction of sorts going on....with the caffeine and the brief ten-minute pause.  Guys used to stop at a bar on the way home....to discuss the Packers, or the Yankees.....or to run through manly gossip that they'd heard through the day.  I suspect the coffee discussions run the same way.

In another twenty years?  I suspect that you will have a card where you prepaid for a hundred coffee cups throughout a year.  You got the discount deal with this.  You have a fancy card that you just swipe, and place a cup under a ultra-fancy coffee brewer device.  Less people, less cost, less hassle.  More individualized coffee mixes?  Yes, somewhere down the line.....we each will have a mythical formula of the perfect coffee (ten percent hardy stuff, ten percent oddball Costa Rican mild, and forty percent of some Honduran root tea mixture that has a sweet element).  The card will help deliver that wonderful blend of personalized coffee/drink.

In Bama, we are world renown for having some nutcases run for political office and embarrass themselves, and their families.

This week.....Parker Griffith got back into the news.  He's a local guy from north Bama.  He was a iron-clad Democrat, and somehow got elected for two terms in the House.  In the midst of 2009 run-up for the same office....Parker realized things were going south, and whipped up the race by declaring himself a Republican.

Naturally, things like this tend to confuse Bama folks.

Parker lost the 2010 primary race to "Mo" Brooks, who was a Republican (at least until the winds shift and he has to change over).

This past week....Parker came out with a new political theme episode....not connected to either political party.  "Alabama Strong!" is the theme.

This theme causes a Bama guy to sit and ponder.

Basically, you pick out a menu of sorts....catfish, gravy, cherry pie with whipped topping, and cornbread.....which appeals to most folks, but would never be the full-up menu choice in reality.

Parker's theme is mostly a FDR-like song.....we ought to be happy about the good things in life and just not worry about the bad things.  Feel good.  Feel peppy.  Feel marvious.

Course, all of this goes hand-in-hand with Auburn winning the NCAA championship, and Boeing putting a factory into Huntsville (well, if God is actively working on Bama's behalf).

Generally, it looks like Parker will run against "Mo" in next year's election.  Republican?  Democrat?  Tea Party?  It's hard to say.  Maybe Parker tries to create some new political party called "Bama Strong!" and he gets twenty thousand folks in north Bama all hyped up on feeling good about lousy things.

My humble guess is that some dimwits with money are hoping to run up another unusual race in Bama....where everything is confusing, and the candidate isn't really political (be "Alabama Strong!").  Bama folks might be naive to vote for a guy....who simply is charming and a bit odd.  We've done that a couple of times in the past.