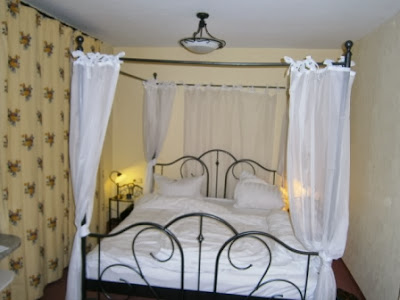 A guy from Bama would pause and gaze over a fancy bed in a decent hotel.  This was the upscale bed in my Nuremberg hotel.

Mattress-wise, there's nothing to get peppy about.  The metal stuff?  Well, it's upscale.

Course, I'm not the romantic type.  I kinda see as a great bed to hang mosquito netting, and I'd naturally ask if folks have many bug issues around these parts.  That would be the wrong question to ask though.
at Wednesday, December 11, 2013 No comments:

NSA and World of Warcraft (A Parody)

NSA's General Joe is getting his daily intelligence briefing from Captain Snuffy, with Colonel Mort in attendance. It's the special briefing of the week, to cover intelligence analysis of World of Warcraft.....a gaming area for nerdy guys, freaky women, and folks overdosing on non-reality.

The General has been very disturbed over the past year with trends of increasing Syrians playing World of Warcraft, along more Saudis than usual, and a high number of Libyans playing World of Warcraft.  All of this, in his mind, is a connected platform where people are there....mostly to swap jihad ideas....rather than taking over digital lands, kill fake characters, and raid the "Fields of Wendy".

The Captain leads off the briefing with the highlights.

- King Luky (aka Lawrence, a 15-year old kid from Tampa) captured dozens of digital unicorns during the week, and is currently leading up a posse of various characters...mostly from Argentina and Lebanon.  The kid ditched school on Thursday, and his mom was called by the school counselor.

- Winky of the Hill People (aka Freddy, a 40-year old unemployed Irish woman) suddenly came out and admitted that she was also Diva Number Nine....a pretender Russian gal.   All of this was noted as she introduced some new Turkish guy named Ahmet to the game, and whacked on some South Korean peasant characters.

- Airman Jones had done more search into forty odd characters all pretending they were from Orange Beach, Alabama.....but in reality....they were all North Koreans....dressed in fine digital clothing that came from some design studio in Seoul.  So far, the forty characters have lost almost every battle they've gone into.....but Airman Jones predicts they will eventually get better.

- Lt Betty's high level analysis over Russian mafia folks taking roles in World of Warcraft, has lead to a discover of sixty different mafia groups having a role or two in the game, and that meetings are being held nightly in some created village called "New Jersey City".

At this point in the presentation.....Sarge enters the room.  Sarge was ordered into this top secret analysis business of World of Warcraft.  He was supposed to be on his final two years and then retiring.  Personally, he's never played the game....kind of mentioning at some point that he doesn't even play chess or poker.  The Air Force didn't care.....they knew he had the skills they needed.

The General asks Sarge for his update.  There's a long pause, and finally Sarge says: "More or less....a bunch of killing going on...digitally....a bunch of losers sitting in basements.....letting their lawns overgrow....skipping two-for-one beer nights at the local pub....and more in love with a fake digital goddess named Greta than with their own wife.

The General nods.  He knows that Sarge will eventually come around to understanding the threat here.

After the meeting....everyone leaves the room, and marches off to the "Fields of Wendy" to battle the evil of the digital world.  Well....except for Sarge, who walks over to the NCO Club and has a double Jack Daniels shot, and sheds a tear or two over lost Soviet empires and the old world that he could touch.

This is not reality or non-reality.  This is a bunch of goofballs with no life.
at Wednesday, December 11, 2013 No comments:

The Rodeo and the Weed

There are two unique stories in the news today, which say a lot about society, where we've been, and where we are going.

First, there's a church up in Lebanon, Ohio.....which wanted to put on a show and draw a vast crowd.  So they removed the pews, put down a bunch of dirt on the floor, put up a extra large cage of sorts, and then brought in a wild horse.

You can sit and imagine this scene, and how things are a bit hectic and chaotic.

The minister emerges in cowboy gear, and with some help.....gets on the wild horse.  There's some bucking, and violent motion.  It's some tense moments, and in roughly ten minutes....the horse has been tamed.

The minister dismounts.....to applause of course, and so begins the sermon on how to take on adversary in life.

I grew up in a Baptist-theme region, and they would have had a very quiet service.....with a minister saying he'd personally heard Jesus talking to him, and that was about as risky as they ever got.  In this case?  At any moment, the horse, could have gone onto turbo-mode and pitched the minister enough to severely injure the guy.  Folks in the audience would have jumped up and said it was a bad sign of something and retreated from the facility.

It's hard to say if this is a sign of the times.....but it does say something about folks using various gimmicks now.....to sell religion to the public.

The second story?  We are now a couple of weeks in Colorado, from legal marijuana sales.  In fact, folks have woke up and now realized that there just might not be enough marijuana (legally grown stuff) to sell on opening day.

You can imagine this scene....a bunch of political guys standing around and all worried about their gimmick of freshly grown marijuana being sold legally on the street, and there's just not enough.  Strangely enough, across the nation, there's tons of weed grown, and delivered daily across the nation, and we always seem to have enough.

The real issue?  Free market.  Well....and there's the issue of a bunch of tourists from out-of-state showing up to buy the stuff and get a Rocky-Mountain-High.  Various state news folks are guessing on the crowd showing up on day one of sales in 2014, and some folks think up to 300,000 may cross the state border to take in the scenery, the snow, and some weed.