Requiem for a Farmer (G A Carson)

Here are the fields that he tilled so long
More fertile than when he began.
Here are the fences he built
In long straight stretches, span on span.

Here stands a tree that he let grow
To furnish shade for the summer stock;
And buildings weather-tight, and snug,
For the comfort of the herd and flock.

Here is the evidence of care,
That shows as plainly as a chart,
Regardless of what else he did
He was a farmer, still at heart.

November would go, and it would seem
That he who lived with the rain and sun,
Who watched with joy the growing crops,
Should rest a while, the harvest is done.
at Tuesday, December 17, 2013 No comments: 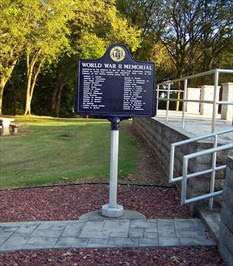 At the county seat where I grew up is a memorial area for vets of different wars.  There's a plague for the World War II vets....who never came home....131 of them.

As a kid, I was told the simple basic story of him going down on a troop ship.  So for all these years, I had this image of a US troop ship nearing the UK and being hit by a German sub.  Cold icy waters, and that was it.

Over the last couple of days, I've picked the story up, sat down and done a fair amount of reading.  There is a bit more to the story, and it becomes more of an interesting piece.

My uncle, in the summer 1941...was dating a local gal and married her.  He bought a farm just across the border going into Tennessee.  He was mostly destined to be a local farmer....up until Pearl Harbor.  He would be drafted in the spring of 1942, get deferred a while, and go off in the fall of 1942, into the Army.

The Army tests folks, and in those days....if you were a smarter than average...you ended up with some technology-related or engineer-related training requirement after bootcamp.  The rest ended up in the infantry or tank corps.

This part of my uncle's story was never told, and I doubt if anyone ever came to grasp it.  He ended up with the 31st Signal Heavy Construction Battalion....out of Camp Atterbury, Indiana.  Most of the guys were former telephone workers with the Bell Telephone Company.  They were simply telephone and communications folks....not front-line troops.

Training would ensue, with a maneuver conducted in the summer of 1943 in Tennessee.  Toward 14 October 1943, they would be put on a ship and sent out to what was originally planned for the North Africa Campaign (Libya, Algeria, and Tunisia).  Somewhere....five months prior.....in the midst of planning and war execution.....the North Africa Campaign came to an abrupt end.  Basically, the British, and their eleven allies deployed into the region...were able to mount an offensive and cornered the Germans. The Germans came to leave that campaign....with significant prisoners taken by the allied force.

By late May 1943, the war in North Africa was coming to an end.  The Pentagon planners may not have grasped all the implications of this.  Planning deployments and having troops at the right places at the right time.....isn't what it is today.  A general could make a decision today, and reroute 5,000 troops in less than seventy-two hours to a different location and make better use of them.  In 1943, it would have taken a month of thinking, and than perhaps another month or two to come to plan "B".

The 31st would land on North Africa, and then be given new fresh orders.....India and beyond (their ultimate destination was to be China in the spring of 1945).  History would be written by surviving members of the 31st.....describing the act of using elephants to tote telephone poles into place and put them into the dug holes, and rigging up lines to Burma.

In mid-to-late November, members of the 31st and a number of other units (Army-Air Force and Combat Engineers) would board a British transport (HMS Rohna).  It was an India-transport ship, which had been brought to use for troop transport.  It'd been built in 1926, but already suffering from rust and issues.

They were to leave the north coast of Africa, transit the Suez Canal, and make way to India.  A day or two out of port.....about fifteen miles off the coast of Algeria with a convoy of ships.....they came under attack.

The convoy protectors did a fairly good job and kept the German fighters at bay.  At some point, late in the afternoon....a German fighter came up with a Henschel-293 and targeted the Rohra.  The Henschel-293 was new technology.....a unplanned plane of sorts that was attached by cabling to the original aircraft.  He'd come in at several thousand feet away, release the plane, and then use a joy-stick to guide the bomb into the ship.

The US apparently knew development of this was going on, and there was little you could do in stopping it....once launched.

Based on accounts of the hit.....the engine room was blown mostly away, and a couple of hundred men onboard were killed in the initial minute or two of the explosion.

Fire would sweep the vessel.

Decisions were made quickly to abandon the Rohna.  Issues quickly developed.  The life-boats weren't in the greatest of conditions (some were rusted and stuck to the vessel).  When some of the life-boats were released.....they fell into the water, and guys simply didn't get to them.

If you did jump....you had to work with the marginal life-vest issued by the Army.  It had one simple flaw.....if you put it on the wrong way.....you'd be unbalanced whiled treading water.  So you wasted double your energy....trying to maintain a balance and move.....avoiding drowning at all cost.  A number of guys ran out of energy and drowned....mostly because of the vest.

The remaining guys?  A fair number couldn't swim, or had severe injuries from the explosion and fire.  On top of that.....you had some German fighters which turned and reportedly made strifling runs across the water....killing Americans as they fled the Rohna.

A rescue attempt was made by several ships.  Of the two thousand men onboard?  1,138 would pass on.  Over the next month....another thirty-five would die from their wounds.

The Rohna incident would be classified for the next twenty-odd years.  The families would get letters in late December noting the passing of a husband, father, or son.  It'd only note that they died via a transport sinking....leaving out details. 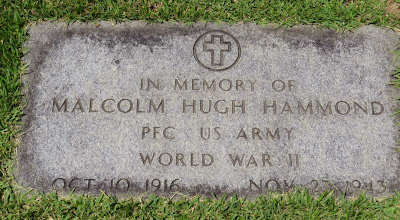 The cause for the secrecy?  No one will say with any absolute conviction.  The condition of the vessel (rusted to some degree) probably got some folks to question if it was safe.  The fact that this was a British transport, and not an American vessel.....another issue.  With the exception of the Arizona sinking in Pearl Harbor....this was the most notable loss in WW II.  At the time.....Army members were told not to discuss the matter, or write letters home to tell of the sinking.  Censorship authorities did their job by pressing individuals to "keep" the secret.  Other than admitting the sinking, the name of the vessel, and the general location....nothing else would be said until the mid-1960s.

My uncle would be given a stone at the local cemetery near where I grew up.  He would be one of the 131 of the county who would not return.  Most who died that day.....simply came to rest at the bottom of the Med.

After reading over the Rohna episode and this little piece of my uncle's history.....it becomes an interesting "what if".  If one single gunner had taken down the attacking aircraft with the Henschel-293....the Rohna would have proceeded onto India.  My uncle?  He would have trudged through the Indian rural areas....likely commenting it looked like Bama....just a bit more dry....throwing up telephone poles and installing communications. He would have trudged over to Burma, and likely even made his way into China.

He likely would have come back in Bama in 1945, and gotten himself a job with Bell Telephone and been a part-time farmer (I can only imagine this).  He would have told ten thousand stories of India, Burma and China....describing snakes twenty foot long....and discussing the friendly character of elephants.

Today?  The Rohna story is rarely told.  The History Channel picked up bits and pieces of it to tell a minor story.  Several folks have mounted efforts to describe their moments a book or two....on the ship, and the history of the 31st while in India and China.

My thanks to Joy Favors and "Hummerstation" for photos.

Looking over the list of 131 names from Lauderdale county from this four year period.....I'm of the mind that there are 131 great stories to be told here....of men who passed from this Earth....in difficult times.  They were all pressed into service, and did what they had to do.
at Tuesday, December 17, 2013 No comments: