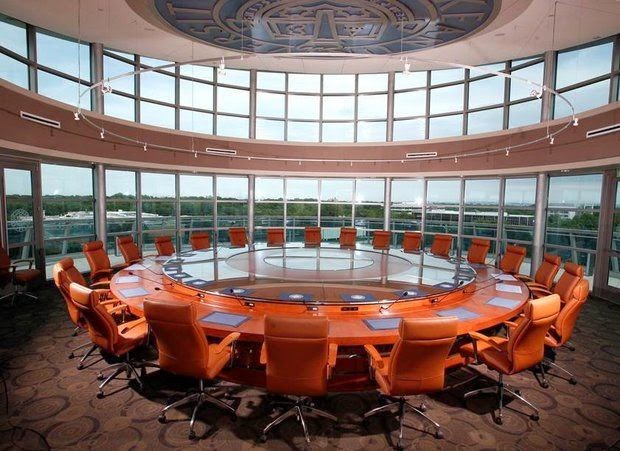 I noticed this story out there today....from Keane University, New Jersey.

The university was updating and renovating it's conference room....the big one where the management staff would gather to make talk over things.

They eventually came to decide on a nifty table for the highly-windowed room....round in scope, and very dynamic, with what appears to be TV monitors built into the table (probably for briefing purposes and tied to some laptop).

Yeah, it's a hefty amount.

Here's the curious thing.  It's made in China.  Someone wrote up the spec's and it's probably bundeled in a dozen boxes to be assembled by some crew Jersey City who get paid $12 an hour for such work.
If the desk had been made in the US?  I used to buy modular desks for a Pentagon organization, and I can tell you that this type deal would have easily run $350,000 for material, delivery and installation.  So, maybe it's a good deal in one way.

All of this has hyped up folks in New Jersey and asking questions about the ethics of spending there via the college management crowd.   Keane charges $11,244 per year for tuition, which in my book....makes it a reasonably priced college when compared against most four-year public colleges.  But you have to wonder.....if someone actually stood there from the state legislature and monitored monthly spending and what the university actually renovated or bought.....the average tuition ought to be more around $8,000.

As for some kind of ethics class for the university management folks?  Forget about that....they'd just laugh it off.

But I would think at least a hundred university staff groups are looking at the impressive pictures....gazing over the million-dollar-type conference table, and thinking they've got a special place in their university for that type of renovation.
at Thursday, December 04, 2014