On the Topic of Bike Trails 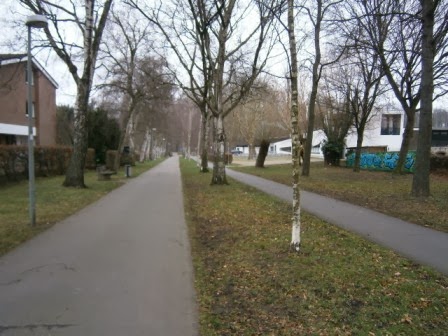 Sometimes, on my travels.....I point out interesting things.

I spent a day or two up in Paderborn (Germany) this week.  It's an interesting town....has a university....a conference center, and 150,000-odd residents.

The curious thing that I came to note....was the walking/bicycling trails (all generally paved or four-star stone) throughout the town.

This shot?  It's on the western end of town, near the conference center and city swimming pool area.  Double-wide paved biking road.  You could get up to 15 mph on the straight-away....at least in the summer months.

A guy could hope on a bike on the far east side of town, and in fifteen minutes....make his way all the way across the opposite end of town.  In some cases, you might only hit four lights while on this short journey.

City planners got smart years ago, and put the trail mix into the master plan.  Houses and neighborhoods are just a minute or two from this bike "autobahns".  Older folks don't have much a reason to say walking is a negative experience.

Toss in a park or two, some woods here and there, a couple of creeks.....and you've got an interesting place to live and commute.  You could skip both the car and the bus.....and just walk  to work.

To be honest.....there aren't that many German towns planned out to this extent.  It'd be interesting to sit down with folks in the town from the 1960s and 1970s....and note how they came to make these decisions, and get public support for it.
at Tuesday, January 21, 2014 No comments: