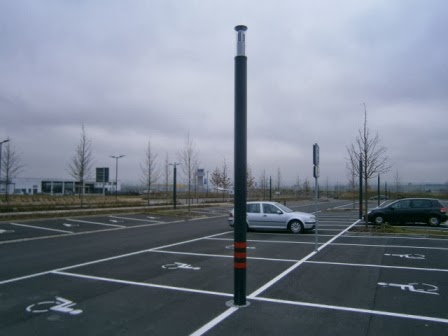 I travel around a bit, and occasionally spot four-star waste.  It took me several decades to be an expert on this.....but after a while, you can point out these things with ease.

Over in Kassel, Germany.....there's the new airport, with two fairly big parking lots (maybe up to 400 parking spots for each parking lot).

The lighting is an interesting thing.  It's a high-grade steel post with a medium bulb.....about every sixty feet.  I'd guess at least twenty-five of these posts in each lot.  General cost and installation included?  I'd take a humble guess at around $5k each....not counting the layout of the electrical grid of the parking which has to connect to each post.

These are fancy posts....the type you'd put in front of a upscale building or along a upscale sidewalk area.  Normally, for a large-scale parking lot.....you'd put in the tall posts with the extra-bright bulbs.  In this parking lot....there'd likely be maybe five or six of these.

So when you figure up the $300 million they spent on this small airport (roughly two gates), with everything on the budget analysis.....there's probably close to a million spent just on the lamp posts and their installation.  A waste?  Yeah, but it's best not to say anything much.  At least these are German-made, and tend to last forty years.
at Wednesday, January 22, 2014 No comments: