Being Reflective in Nature 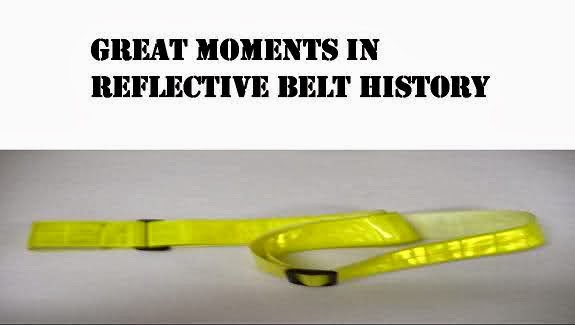 Being retired Air Force (22 brief years)....I tend to go over and review once or twice a month....Air Force news and changes.  This week came a mighty big and important announcement.  The reflective belt....a requirement of sorts since the late 1970s for everyone in uniform in non-daylight hours....is deemed 'optional' for the work-out uniform.

The Air Force about a decade ago....went to a standard exercise outfit....which meant you had to buy it and keep it in somewhat clean order.  Naturally, it was sold to you with reflective material already on it.  The idea of your unit forcing you to carry the stupid reflective belt around.....on top of this....was generally deemed silly.

When you get to a unit these days....along with the first twenty things that occur on day one....is the issuance of this belt.  You can buy the belt over at the BX....typically for a couple of bucks.  Most units will give you a new belt ever twelve months.  I'd take a guess that twenty percent of folks lose their belts at least once or twice a year.  I worked with a guy from the late 90's who lost at least six belts in one year.

The sales job on this belt business?  The safety guys will harp over and over.....as darkness starts to come....your clothing doesn't outline your profile enough, and thus....you get hit by a car easily.  About once a year in the Air Force....such an accident happens, and it just gets folks all peppered up to endorse the reflective belt for the 300th time.

So you can imagine this change.  Sarge gets out of his car in civilian clothing at the gym at 6AM.  Sarge dresses in the Air Force mandated gym outfit and looks like a professional Dallas Cowboys player.  Sarge gets sweaty while playing twenty-five minutes of volleyball and lifting weights for eight minutes.  Sarge showers, and dresses in his uniform.  Sarge starts to leave the gym at 7AM....discovering it's still dark outside, and must immediately look into his gym bag for the stupid reflective belt which is still required for outside use while in uniform.  Sarge walks down the street, safely and survives....only because of the reflective belt.  All is good with Sarge, and hopefully.....he remembers the 10,000 occasions that the reflective belt saved him from dying....as he retired at twenty years.

Well.....you'd hope this.  There's six pallets of reflective belts delivered at supply each year, and at least fifteen thousand reflective belts issued for the three thousand GI's on base.  So far, no one from Congress has asked where all these belts come from, and where they go.  I'm just waiting on this to start up one day.
at Friday, January 24, 2014 No comments:

This week....the governor for Michigan....Rick Snyder....came up and asked the federal government for a 'favor'.

What Governor Rick wants.....is thousands of regular work visas.....50,000 to be precise....over five years....to be reserved for Detroit, period.  Not the state of Michigan or surrounding regions....but Detroit city itself.

Normally, the rules don't dictate where you go, with the EB-2 visa.  It will dictate which area of the world gets offered the visas (like India gets this number per year, and China gets this number per year).  They've never stood there and said 5,000 folks coming into the US....have to go to California, or Texas, or Orlando. So this is a fair sized request and change.

What's the intention?  Governor Rick says that it'd bring a boom economic period to Detroit.  New fresh faces.....new energy....new company growth.  Folks would be forced to relocate engineering services, or software developmental companies....into Detroit.  This is a method of capitalism that has rarely been used in the past.

Most folks from the business community ought to be a bit worried and very negative about this.  They don't want to be forced into a corner....about where they build or expand into.  Who the heck would want to establish a 700-person division in Detroit City?

The other side of this coin....what idiot in Bombay or Peking....would beg for a work visa....to come and work in Detroit?  They'd have to know the whole story (packing a pistol twenty-four hours a day, and vast neighborhoods totally deserted).

Would a guy living in a third-world community in Egypt....volunteer to come to Detroit to work?  It's a good question.  Heck, it might even be worth a History Channel series like the Duck Dynasty crowd....Me-Jung and his cousin Joe-Mung.....living and working in Detroit City.

The folks working against Governor Rick?  Well....several Detroit community leaders came out and said this would take jobs away from the long established locals.  They could be right about this....but considering that forty percent of Detroit residents probably can't pass a drug-test, and at least twenty-percent of the city's adults have some arrest record or jail-time.....there might not be much hope for this logic of defeating Governor Rick.

So finally, I come to this odd observation.  If this works in Detroit City....why not try it in Bama or west Texas?  If we come five years into the future and the gimmick of immigration visas defined for certain areas where  you must settle.....is a success, it opens up a number of questions.

Maybe the current immigration reform ideas are goofed up.  Maybe we ought to say.....you can stay, declare yourself, and become a US citizen....but there's a limit in each state, and the state legislature will determine what that number will be....not a bunch of fed guys or elected House or Senate dimwits.  We might all start looking at immigration reform in a different way.  And the national media folks would lose a major topic of discussion....as would both political parties.  We'd tend to our own backyard, and not let some guy 2,000 miles away dictate the size, shape, or slant-factor of our backyard.  Life might get simple.
at Friday, January 24, 2014 No comments:

On the Subject of Ambassadors

The Senate is in the midst of approving the new US ambassador to Norway.  It's a bit of a farce.  Most ambassadorships.....are given as political gifts to folks who've helped a campaign, or did a favor for the President or his friends.  It's been that way for at least a hundred years, and generally....everyone just looks the other way and accepts the comedy of sorts.

This guy heading to Norway?  George Tsunis.  His connection to the President?  He helped to get $840-odd thousand dollars to the Obama campaign for 2012, and did another favor by supporting a PAC to the tune of $300-odd thousand dollars.  He's a 'gold-star' member of sorts.  So the nifty ambassador job in Norway is the gift in return.

The US Senate....for better or worse.....has to see these guys and put them through a question process.  It's typically a couple of hours in front of some committee.  They generally ask how your family is doing, what you thought of the Dodgers last year, your personal opinion on the economy, and your background.

The guy would usually get two or three hours of prep by some government guy who represents the White House.  They will tell him....this is what to say or not to say.  They will advise on stupid opinions, and how to just avoid them.  And usually.....a guy makes it through with no issues.

This week however....Tsunis met with McCain as the meeting progressed.  Senator McCain asked several simple questions on Norway.....mostly over the government, who runs things, and life in Norway.

Well.....it's more than obvious that Tsunis knows absolutely nothing about Norway, period.  Oh, he knows they speak Norwegian, and it's bitter cold.  But in terms of stuff you ought to know....if you were ambassador....it's a big zero.

What Tsunis's occupation in real life?  He's the CEO of Chartwell Hotels.  Chartwell....the name....comes from the old family home of Winston Churchill.....so it's a historic piece of a word.....tied to a hotel chain of sorts.  A big operation?  No.  There's roughly a dozen-odd hotels of fair character attached to the company.  Nothing outside the US.....at least right now.

What's this all add up to?  Well....it's a resume-builder....pure and simple.  You go off and do two to three years at some ambassador job.  The odds of you getting fired?  Maybe once every twenty years....someone has to retire quickly because they got caught doing something stupid.  The bulk of the political appointments seem to be an accepted practice.

I'm guessing that Ambassador Tsunis will arrive in Norway.....discover things are a bit more complicated than he imagined....but he realizes that there are forty-odd people who really carry the bulk of the ambassadorship and he's free for six hours of the day to sip coffee, read newspapers, and play tennis at some private club there in Norway.  Once a week....he gets an invitation to some private party (maybe the Greek ambassador inviting him over.....maybe the Japanese ambassador sending an invite.....maybe some Norwegian shoe company CEO sending an invitation over).  He'll stay somewhat busy and eventually wrap up his one brief moment in life where he really didn't have to work.

It'd be nice to reach this stage in life, and I admit....I'd kinda like to do this ambassador stuff.  But, to me....finding and giving some million dollars to some Presidential campaign....would be such a terrible waste.  Heck, a guy could go spend a million on Arkansas farmland, or buy a shrimp boat in Mobile, or buy up a pretty decent motel in Flagstaff, Arizona, or even open your own distillery and sell your personalized brandy to the public.  Why waste money for political folks?

I guess I'm not the type of guy bound for the ambassador trade.  I'm just too practical.
at Friday, January 24, 2014 No comments: