Facebook came up this week....with an interesting change.  You see....as you registered and got an account with "FB"....you filled in this field of sex with 'male' or 'female'.  Well....up until yesterday.

The FB folks finally decided that it wasn't right, and they needed to be fair.....so they gave a custom area to the decision of sex, and now allow up around roughly forty-five choices of identification.

Naturally, a guy from Bama starts to ask questions.

You could be a person transitioning from male-to-female....female-to-male....transgender....and another thirty odd descriptions which lead you to ask what-the-hell, and then just nod your head and grasp that the world has moved on into some twilight zone-like situation.

The value of this one simple column?  Well....it's a gimmick which FB will sell that little bit of data to some political group, or candy store, or Chinese fashion company.  If you had seventeen thousand folks suddenly announce they were labeled "half-man-half-woman"....well, there's some fashion trend there waiting to be exploited.

Eventually, I think FB will get around to identifying you to cartoon characters, car models, actors or actresses, NFL players, and perhaps even Hindu Gods (there's at least three hundred of them).  It all means cash in some profit way to FB.

My advice?  If you get all serious about this kind of stuff....you might not have much in life to do.  I'd suggest a hobby or two....maybe taking up landscape work....hauling hay....or just enjoying what few good and healthy years of life that the almighty hands down to you. 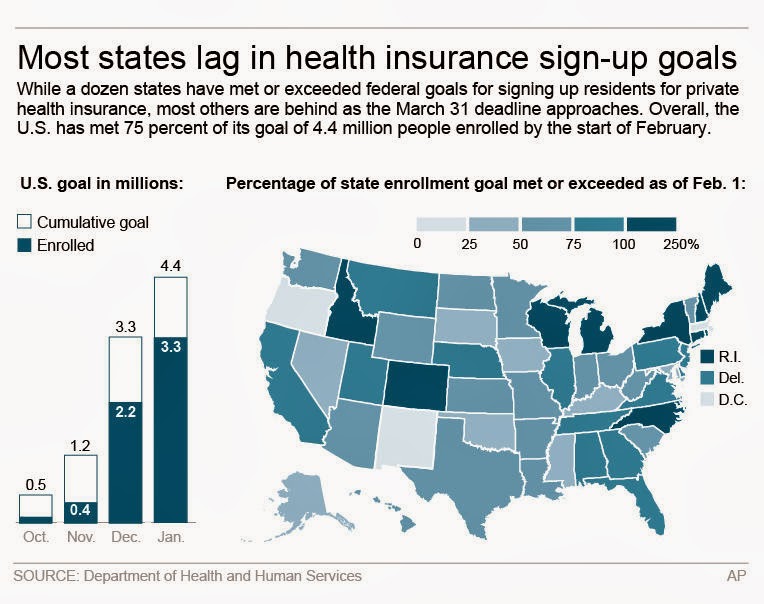 Yahoo put up this graphic today.  Its an interesting detail on health insurance sign-up rates....state-by-state.

Course, you'd look and note that some states are absolute failures....like Oregon and New Mexico.  I won't guess the reasons....you'd have to be living there to really grasp that.

So I looked over at Bama.  We were in the 75-to-100 percent goal area.  It doesn't necessary mean that seventy-five percent of Bama folks signed up and things look great.  It just means there was a goal within the state of Bama....and somehow, by the grace of God.....we reached that goal of 75-to-100 percent.  Maybe they wanted a thousand folks signed up....out of six million.  Well....this part of the gimmick....wasn't explained in any detail.

I am proud of my home-state....for the obvious reason that barely twenty percent of the state's residents are internet savy, and this all occurred during the remarkable NCAA football run-up period back in November, December, and early January.  Yeah, we had a lot on our mind.

Yeah, I kinda got smart on graphics, details, and how people tell you remarkable stories with almost no validity or facts given.

So, then I gazed at those oddball states like Idaho, Colorado, North Carolina, Michigan, New York, and Rhode Island.  The graphic says....they are between 100-and-250 percent of the goal.  In real life....you can't really go past 100-percent....unless you are talking low goals assigned, or fake numbers used, or a bunch of non-existent people suddenly arrived and got into the calculation.

Is it possible that by the end of 2014....from one particular state....we will have thousand-percent of the goal achieved?  Yes.  You might get confused, and ask how a thousand-percent can occur, but the journalists would just say you didn't pay attention in high school math....and just missed that sixteen minute lecture by your substitute teacher who was dopey from sipping cough medicine all day.

So, I'm suggesting a radical thing.  Make all your goals in life small....with limited but achievable numbers involved.  As each success arrives....gauge the number....publish your statistics of success, and let everyone know that you are at 116-percent of your intended goal.  If you need to lose weight....set the goal at six pounds for the year, and when you lose thirty-two pounds over twelve months.....it'll look fabulous with the five-hundred percent weight loss.

When the wife asks you to put aside some money for Junior's education....set the goal for five dollars a week....but put in twenty.  So you can claim a four-hundred percent success rate at the end of the year with the wife.  She will be very impressed with your efforts.

Set up a successful life goal of living to at least age twenty-five....so when you reach fifty....you can boldly go around and proclaim absolute success at age fifty of two-hundred percent of the goal reached.

Yeah.....I am suggesting turning life into a bunch of numbers....mostly bogus and no value, but accurate.

We are living in a bold era, and we'd best enjoy what little boldness and success that does exist....even if it's a bogus one-hundred-percent success rate.
at Friday, February 14, 2014 No comments: