This week....a little science story came out which has a major twist on history, and Stonehenge (one of my favorite tourist places to visit, which I agree....it's more of a 'trap' than anything else).

If you go to Stonehenge...about two miles east of the area is this small town of Amesbury.  Today, there are 8,900 folks who reside in the village.  To be honest....if Stonehenge wasn't just around the block.....I would imagine the size of Amesbury to be a lot smaller than it is.

For years and years.....no one really put Stonehenge and Amesbury on the same scale of things.  You might stop off in Amesbury to eat lunch or stay the night after visiting Stonehenge, but no one much pays attention to the village.

Well....guys got around to digging and came to realize that Amesbury has an awful lot of buried history, which goes back to 8,820 BC.  That's 10,000-plus years ago.  That kind of started the historians, and basically put Amesbury onto a new prospective....the oldest known community/city in England. 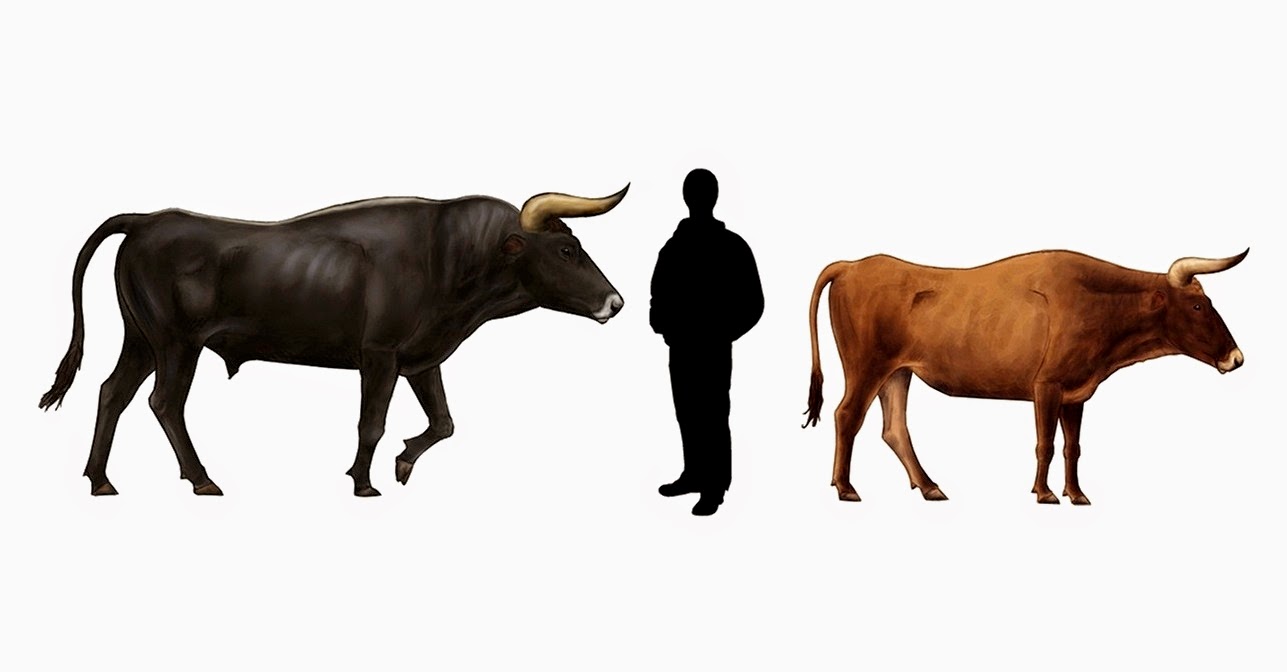 So, it brought out this interesting idea.  They can show that Amesbury was there.....longer than Stonehenge.

Based on items dug up, there's now speculation that Amesbury's original crowd knew that they had some unique features and likely had some very creative characters in the local area.  Add to this feature....some Auroch cows.

Now, I admit...I didn't really know much about the Auroch cattle.  It's an interesting thing.  This is a breed which goes back to the stone-age period and is a fairly big critter.  To be honest....it's size kinda makes it a bit dangerous to be around and getting one of them upset....probably trouble.  And I doubt that you can outrun this guy.

The locals in Amesbury apparently had a passion for the Auroch, and it was a major part of their structure.  I'm guessing they had come to this interesting change in culture.  They had gone from the hunter-gatherer cycle......to the stationary farmer cycle.  But this Auroch cow fits heavily into the scheme.  You breed and run a herd of Auroch cows.....which you easily deliver your beef substance, when you desire.  No one says much about the local herd, but I'd take a pretty educated guess that it was more than a thousand head easily, and the herd provided beef to the locals, and to the visitors as they came by.

Where does this lead one?  Well....Amesbury took this hillside area, and it's believed that some development took place, and Stonehenge was put into place.  The local river?  Avon is a small river which has roughly twenty different contributing streams or small rivers leading into it.  You could live north or south of Amesbury, and easily travel to region....visiting for trade, beef, or to get some religious feeling from the Stonehenge monument.

I can imagine this legend stuff being passed around....folks noting the fine beef over at Amesbury, and a bunch of guys taking off four or five days to go down.....have some ale, some beef, and chat over gossip, while visiting the Amesbury religious site.  A guy would sit there and look over an amazing slab of beef.....48 ounces....cooked real tender....and probably desire to come back often.

Maybe this is how Stonehenge became such a big deal....mostly because of the beef....not the solar cycle.
at Saturday, May 10, 2014 No comments: