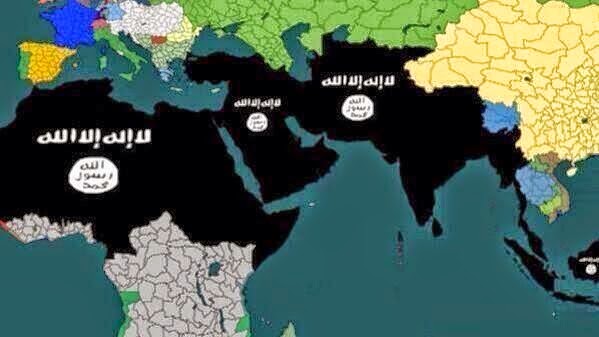 Someone put up a graphic this morning of the five-year plan of ISIS (this Iraq-Syrian based terror army).
Their intention is....forget about this demonstration game of the Taliban or bin Laden's bad-boys....march on, kill, and install absolute fear in the locals.

You start to look at the map....ALL of north Africa....Saudi Arabia, Turkey, Iran, Iraq, Pakistan, India, Burma, and onto Indonesia.

The general tactic?  Instead of one-time 9-11 events....these guys think big.  You get a large enough group.....you front them with weapons....and you don't collect prisoners (you execute everyone you come across who surrenders).  At the end of the day....you conquer a 100 by 100 mile area with the help of five-hundred extremists.  Everyone still living....is in absolute fear, and you just nod your head that they can live as long as they play your game.

How you effect a change in a place like Turkey?  You start out in some small community at the police station and shoot all the cops inside, then take the top twenty-five political figures of the region and execute them in some town square.  Any judges, professors or business men?  Execute them as you come across them in their home or on the street.

Egypt?  Pick small towns and find the one-hundred men of authority....execute them in the street and let folks know who did it.

Basically, you could take all of the Middle East and North Africa in two years with this method.  As long as you had fuel.....lack of aggression on the other side (utter shock)....and a view of no turning back, I don't see any halt to this.

So, I'll put up my best guess on Iraq.  The entire state collapses within seventy-five days....with maybe a quarter of the nation in existence still (the Kurds).  Kuwait?  Just a twenty-day fight, and they will be knocked out.  Iran will at this point call up every reserve they've got and opt to ask for help from Russia.

The US?  I think the oil price shock (coming likely in mid-July).....will likely blow the administration back several steps.  This small contingent idea....250 special operations people into Iraq.....too little, too late.  By September, a much bigger force will be called into Kuwait....to hold back the invasion there.  The ISIS folks might swing back around and go for Jordan (less than twenty days of killing to take full control there).

Maybe I'm wrong, but these guys figured out the best strategy......absolutely throwing everything into a fight and refusing to collect prisoners.  It'll be hard to counter them.
at Monday, June 23, 2014 No comments:

Last year....Senator John McCain (Rep, AZ), ended up going on a junket tour of sites in the Middle East to get the "inside knowledge" he required.

Lots of photos taken....this is one of them.

How did he get talked into meeting with ISIS folks?  It's hard to say.  They were Jihadists and maybe McCain's handlers thought they were "good Jihadists" (an Administration slogan at times).

Most people who have insight into ISIS....readily agree that they have a significant amount of influence and capital coming from Saudi Arabia.  The Saudis....if you remember....got all upset when the Administration's two-star Syria-war concept fell apart and the Russians just trumped up the White House in a major way.  After that episode, it's likely that the Saudis drew up their own agenda and figured that their contract team in Syria (ISIS)....could easily turn and move into Iraq territory.

Over the weekend, if you read through British press coverage.....it's apparent that Iranian leadership is a bit disturbed over this whole mess.  They really don't need Sunni-influence within an hour's drive of the Iranian border.  If Iraq falls apart....into three states....they will be extremely weak and prone to more violence.  All of this is negative for Iran's future goals, but it makes the Saudis happy that Iran is disgruntled.

As for McCain?  I'm guessing he's asking stupid questions right now and wondering how his Chief of Staff convinced him to make this trip and who else he might be pictured with (maybe out of Mexico) that would be trouble in the future.  It's just another reason why no US Senators and Representatives ought to be traveling beyond the US border.
at Monday, June 23, 2014 No comments: