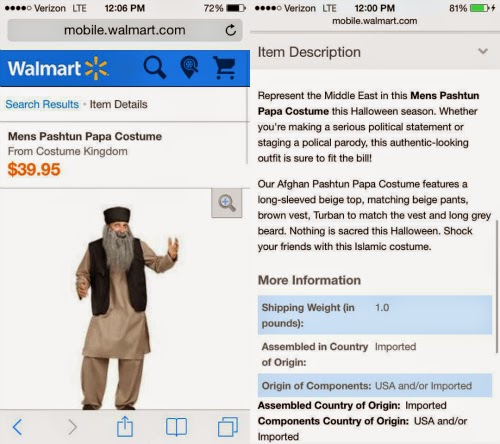 Halloween has come and gone  I noticed late yesterday, that Walmart had some costume up for sale, $39.95, for a Afghan Pashtun Papa deal.  Yeah.....a Ossam Bin Laden outfit.

You get a fake bear, some turban, a floppy pair of pants, a vest, and some long t-shirt. Origin?  They don't say, but I'd take a guess it's China.

If you showed up at some party in this....I'd take a guess that most folks would be coming up to make some pointed comments about 69 virgins, your recommendations for cave accommodations, or ask if Bush or Obama knew what they were doing.

Bad taste?  Maybe, but it's all a parody now with costumes.

I've attended one costume party in my life....wearing a Santa outfit.  I felt silly wearing the suit, and put the whole thing away into storage (1978).  Wearing the fake Pashtun outfit?  No.....it's just not for me.
at Saturday, November 01, 2014 No comments: