I noticed in today's news.....even the Alabama Attorney General has decided to jump into the VW diesel business.  There's apparently already twenty-odd AG's throughout the US....fixing up some kind of investigation and settlement deal.  My humble guess?  The EPA might be convinced to keep the fine at one billion dollars....but that might be one side of the whole deal.  The fifty states?  Combined....I'll bet it adds up to ten billion easily.  Then you might have lawyers just going for private lawsuits.

So, I'm making these five predictions:

1. An EPA leveraged deal where Volkswagen must fix the problem and pay a fine (one billion is my humble guess on the minimum), OR perform a buy-back/swap...with a gas engine car instead.   The 'fix'?  Well....it'd be a software and engine update....which brings that 42 mpg down to around 22 mpg.  The odds of some guy accepting something like this?  Zero.  The odds of some guy accepting a buy-back deal?  Zero.  If you are getting 42 mpg.....you are fairly happy and don't want a government guy messing with your life.

2. Oddly, over ninety-percent of the owners will refuse the fix....refuse the swap....and say they won’t participate with the EPA deal.  Or you might have guys accept the 'fix', with some cash for the deal and then have some engineer friend reset the computer back to the 42 mpg version and dirty air deal.

3. EPA then gets upset over people confronting them....so they order them to accept the swap or pay a yearly fine of $500. More than half of the owners will accept the $500 a year fine and just say OK, but take the EPA to court.

4. When the smoke finally clears....half of the cars are bought back and put on trucks...sent to Mexico and sold there to the general public...sending the fumes over the border into the US.  EPA goes ballistic but can't do anything about this.

5. VW has billions to pay which infuriates the Germans. So the Germans decide by 2017...an election year in Germany...to sue the US for privacy violations by NSA for 15-billion dollars. As much money as the state attorney generals and EPA think they will get off VW....the Germans will get twice that much in return.

Finally, this odd feeling.  What would President Donald Trump do when the Germans confront him over NSA, privacy violations and pay-back for the screw-job on VW?  I'm guessing that President Donald will jump quickly and order US troops to pack up and leave Germany.  We might all be shocked at how this incident flipped itself into some radical change in German-US relations.
at Friday, September 25, 2015 No comments: 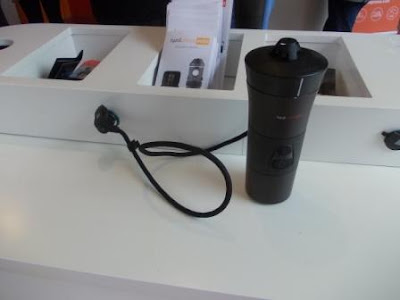 From the Frankfurt International Car Show.....another curious item....a car espresso maker.  I stood there and watched the guy demonstrate this.  I admit....I like espresso and  it might be a nice feature to have this in your car.....brewing and making your personal espresso mix while driving down the road to work each morning.

But then you'd start to think about this.  Espresso makers only work correctly.....under extreme heat and high pressure.  About the last thing you'd want to have happen in some car or truck at 75 mph.....is for the espresso machine top to flip off and toss hot coffee around the interior and onto your lap.  For some reason, I might be fearful of having this nifty device. 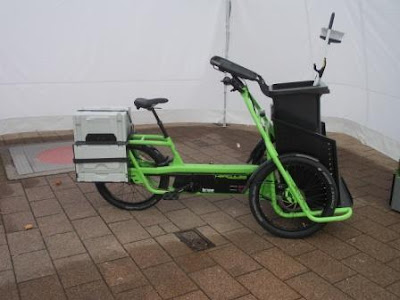 Another interesting item was the street sweeper bike.  Yep.  It's a can mounted onto the bike (3 x wheels) with your gear and everything.  It's hard for me to imagine any landscaper guy volunteering or allowing himself to be talked into pedaling this around some town to do clean-up work.  Price?  Unknown....but it has to be a minimum of $2k in my humble opinion.

Finally, I come to odd feature that was on display at several points at the car show.....virtual reality.  This shot was taken as I watched an older guy sit down and the tech-geek lady set him up with some virtual reality goggles. 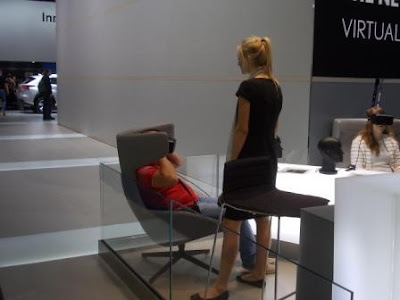 How this fits into car innovation in the future?  Unknown.  It's pretty well thought out that we will have driver-less cars within a decade.....so why bother with any virtual reality driving skills?  It'll never happen.  Other than the gaming world, I don't any work skill usage coming out of this.

Course, maybe the idea is to have two pair in the backseat and have the kids entertained in some bogus reality world instead of asking stupid questions or demanding to know when we will arrive at Grandma's house.
at Friday, September 25, 2015 No comments:

From the Car Show This Week 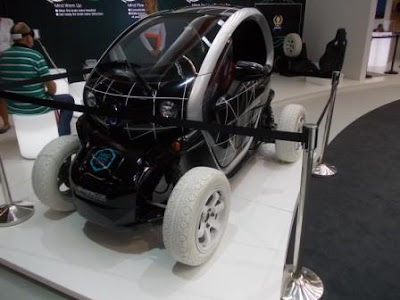 I went to the Frankfurt International Car Show this week.

There were dozens of interesting things....but two caught my eye more than most.

First, there's a European car company which has developed this unique tire....which has sensors and talks to the onboard computer of the car....noting tire pressure and conditions which might affect driving.

I admit....it might be still five years away from real production and it might cost a fair amount of money (probably more than $300 a tire) to have this all work.  But it's an interesting concept.

The other idea is this Audi feature which is going to be on new models.  As you get the door up to the one-inch point of closure.....the car takes over and automatically closes the door for you (no strength or pull on your part.....a motor pulls the door shut and locks it).

I stood there and watched the lady show the guy the feature.....and he pulled near the closure point five or six times.....and it shut on it's own.

Now, the thing I was looking at.....if you brought this home and told Donny Junior (the 5-year old kid) about this feature on your new car.....Donny would want to go out and put his finger between the door and the car and then watch it slam shut closed on the finger.  Maybe it's just me thinking this.....but I could see tens of thousands of stupid kids doing this and Audi having to dump the feature eventually.
at Friday, September 25, 2015 No comments: