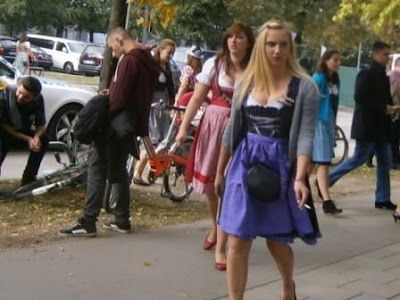 You can dress casual at Octoberfest.....in regular clothing.  Or you can dress Bavarian (not German).....and be a bit different.

The ladies outfit as you see....is something out of the 1800s, and amply showing as much chest as a guy really needs to see.

Most gals from Bavaria will dress in the outfit, which might run around 200 Euro.

For the guys?  Leiderhosen will run you for the whole leather pants and shirt deal, and the right socks....probably around 300 to 350 Euro. 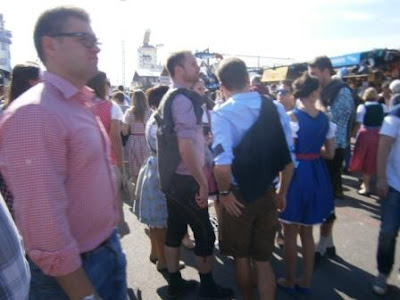 You can go real cheap, with fake leather or goat-leather....for maybe 65 Euro.

Is it really necessary to be this way?  It would be debatable.

Maybe if you wanted to impress some guy with the open blouse, impress the girlfriend with some silly suit...well, fine.

The problem I see....you spend like 350 Euro for some fancy leather pants, you drink a good bit, and you end on the throw-up hill.....tossing up a bunch of stuff on the nice new leather pants.
at Monday, October 05, 2015 No comments: 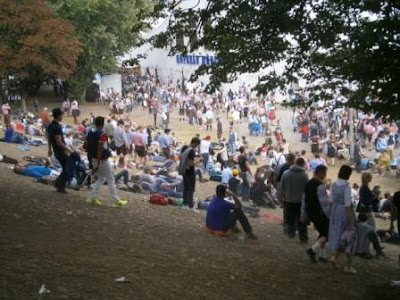 At the end of the Octoberfest 'playground'.....there's the hill.  This is typically where guys somehow get themselves there and just lay there until the state of drunkenness has passed.  Or, if your friends think you too drunk to handle.....this is where they will drop you off.

You will note that it's got a slant, and this is supposed to help those who might have eaten a good bit, and need to throw up as well.

The medics will make a pass every hour and kinda check for severe cases.....guys who have deep cuts and bleeding bad or guys with broken body parts.

So, if you got there around 9AM, and did hard-drinking for two hours.....you'd go to the hill for phase one.  Then return to the fest for more beer by 2PM, and then come back to the hill by 6PM, and rest until 9PM to go home.

You could stand at the top of the hill and admire the tough nature of these guys and gals.  They've put away tons of beer prior to 1PM and could go back for more beer later. I stood there and admired one guy who'd thrown up a good bit of food that he consumed in the morning and he was laying on most of that.  It's hard to say what he'll do when he finally comes around, or how he cleans himself up.

If you ever go to the fest, I'd suggest that you start at the hill around noon and admire the folks there.....before you make your way into the fest itself.  Maybe it'll help motivate you to sip less beer.  Maybe.
at Monday, October 05, 2015 No comments: 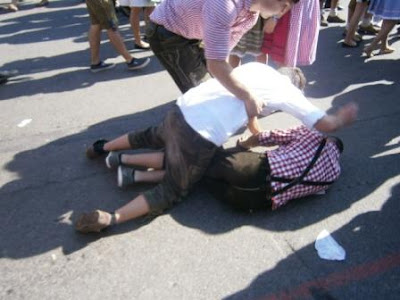 One of the things you have to note during a Octoberfest episode....are drunks.

In this case, I watched the episode unfold.

Huns....the guy in ground in the red shirt....was unable to handle his coordination any longer.  This was around 1PM and they'd wrapped up their first fest tent beer (or two, or three).

Huns tried to put his arm over the shoulder of his buddy....Marvin.  Marvin could barely stand and the two collapsed on the ground.

As much as Marvin wanted to help his poor buddy....Huns was just 'out of it'....as we would say in Alabama.  Huns kinda laid there.....on the asphalt. You could tell as he kinda rolled there.....he had abrasions on his forehead and some pretty wicked cuts.  Stitches?  I'm guessing he needed three or four minimum......a fair dose of bactine (maybe half a bottle) over the abrasions on his forehead.

If you walk around enough.....you come to note a number of guys (mostly all guys).....who have fresh stitches on their head and you kinda wonder if they've been at the fest for a day or two or three.

If you walked around for twelve hours.....statistically, I'd take a guess that you might note at least two hundred episodes like this.

Medical squads roam the fair grounds and make assessments.  Two guys to a team.  If it's really bad.....they will call for a team with a dolly to come and get you.  They drag you over to the far end of the fair grounds where there's an emergency complex set up.  They are kinda nice about it.....taking care of you.....then asking you for your German medical card or a credit card.  Yeah.....they are going to get some money out of you for the treatment required.  It won't be terribly expensive.....at least by US standards where they'd charge $1,500 for an emergency room visit and another $2,000 for some treatments.

Will Huns remember anything of the day?  I kinda doubt it.  In fact.....even if the medical guys treat Huns....they will likely release him within three or four hours, and this being late afternoon by that point.....there's still more drinking to do, and Huns will go right back for more action.  You'd think the medical guys would invent some laxative to apply and make the guy nauseous if he consumed more booze for the day.....but no, that just wouldn't be right to limit a guy.
at Monday, October 05, 2015 No comments:

I've come to this idea....instead of advocating gun control.....it might be more logical to advocate crazy control.

It's a simplistic idea.  Basically take every single standard that folks wanted to apply to guns, and apply it to crazy people.

So, you start with crazy registration and a national registry of crazy people.  Anyone on medication that might cloud their judgement or keeps them 'numb'?  Onto the registry.  Anyone who is a LSD player, or uses bath salts or meth?  They go onto the registry.  Got five neighbors or relatives who go to a judge and sign paperwork on someone, and force the court of the county to examine a guy?  He goes onto the registry.

Once you have the registry.....you tell the gun shops and private owners.....they can't sell to this guy or gal, period. Failure to observe the crazy registry?  You do jail-time in your state.

After this is in place.....then you go and visit the homes of the crazy people and remove their guns.  If other non-crazy people live in the house or apartment and own guns?  Fine.....as long as they place their guns in a locked gun cabinet with only one single key.....they can retain their weapons.  If they can't prove the locked gun cabinet requirement.....they temporarily lose their weapons until they can fix their problem or dump their relative or friend with someone else.

Most legit gun owners and hunters.....would support this type of idea with no hesitation.  The question is....would a liberal support it?  Do liberals think that crazies have more rights in life, than gun owners?

Cost of this idea?  That's the interesting part.  Other than a national registry.....nothing much else.  Got a judge who orders the removal of a guy from the national registry?  Fine.  If the guy fails or show craziness later.....killing someone? Put the judge into some jail for a while and see if he learns his lesson.

I know.....it probably won't work, and people will get bad feelings about dumping on crazy folks.  But sane and normal people don't go around shooting or murdering folks.  That's really the truth to the whole issue.
at Monday, October 05, 2015 1 comment: