Light on a Tree 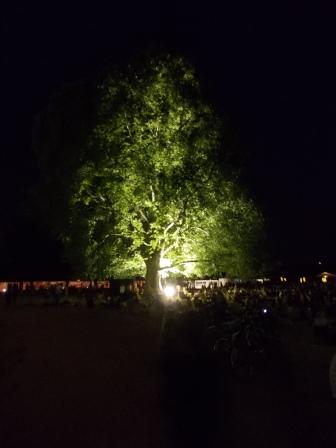 This past summer in Dresden....they had a fest one night by the river.  From the distance, I could see this big 'greenish' thing.  So you walk and walk.....finally getting to this tree in the middle of a fest.

They've put up a high wattage light.....focused up into the tree and it's reflected a hundred-times over.

From a mile away, it's obvious and just draws your attention.
at Tuesday, October 06, 2015 No comments:

This morning, on my way to class....I rode the early bus which was loaded with 'teenies' (German kids).  Most adults try to avoid this 7:00 to 7:30 run of buses because of the hectic nature of kids on a bus.  Sometimes, I end up learning things from this younger crowd.

This morning.....as I stood in the middle of the bus....I had a great view of a seat with two young ladies (probably around thirteen years old each).  They'd sat down and dragged out homework.  We have twenty-five minutes before the bus hits Wiesbaden.....so you have time to compare notes and wrap up homework assignments.  From what I could see from over their shoulder....it was a wordy math problem.  One had the problem written out.....the other one did not.

There was some brief discussion between the two and then one pulls out a smart-phone and pulls up a video, then shares a ear-piece with her friend.  I can't hear the audio but I can see clearly the smart-phone screen.

So, this guy comes up on the screen.....maybe thirteen years old and he's waving this work-sheet around.  Then he turns to a white-board behind him and here's the text of the problem (the same as the young ladies have, I must assume).  He takes a marker and marks out this phrase and that phrase.....then circles three statistical things, and then puts to the final question.  Then here's the equation....very simply written.  The one girl hits stop, and the other one without the finished problem begins to write the equation.

I stood there and realized this marvelous thing that had occurred.

Over the last six years of high school.....I had five math instructors.  Two were marginal math experts.  Two were average.  And one really knew how to explain the simplicity of physics and math.

In the ninth grade, we had this one chapter that should have taken three weeks to complete, and this guy could not get the point across.  We got somewhere around seven weeks that were wasted because it just didn't make sense.....on a chapter that should have taken three weeks. In the end.....we just moved on while fifty percent of the class never got it.  I barely got it myself.

There are kids out there who are sitting in math classes and really know how to take complex issues and lessen the pain and suffering of math.  They can take a complex word problem.....throw out the red herrings.....and suddenly use one single example to get the point across.  That's what this young kid on the video had done.

But now, you think of innovation of this situation.

The kid walked out of school around 1PM yesterday and went home.  He snacked and probably started homework by 2PM.  He reached this math issue by 2:30 and quickly assessed the stupidity of the question and the woeful way it was contrived.  By 3:00....he'd put the problem onto a white board in the house and with a friend video-taping this.....he worked up a 90-second presentation to get the problem across in simplistic form.

He loaded the 90-second video onto the internet....probably facebook and YouTube, then shared it with the twenty-four other kids in the class (one assumes).  Among them.....they probably knew of another forty kids of their age in Hessen with the same math book and same homework standard, and they shared it out.  By 10PM last night.....at least one hundred kids probably had the 90-second presentation.

By this morning (07:30), there were probably three-hundred kids who'd accessed this 90-second presentation and wrapped up their homework.

They will all enter some math class today, with a marginal math teacher.  The marginal teacher will be picking some poor kid who should normally fail the problem and screw up the problem as they walk up to the white board to write their answer.  Well.....they won't screw up.  They will write the right answer.

The teacher will be shocked and pat himself on the back.....with outstanding work accomplished.....even if he is a marginal math instructor.

Innovation, the internet, Facebook, YouTube, smart-phones, Wi-Fi, and technology.....are giving the geeky guys a chance to pass along knowledge to overcome incompetent and marginal teachers.  We didn't have that in 1973.  Today?  The sky is the limit.

The amazing thing is that this one kid took a complex problem and in ninety seconds had flipped it around to be a very simple math question, with a few numbers arranged in some equation.  Why can't the guys who write these stupid math books do the same thing?  No answer.
at Tuesday, October 06, 2015 No comments:

After touring the Octoberfest, I came to a point where I admitted it was just too stressful and needed relief....so I ended up by the English Gardens....ten minutes walking from the Munich train-station.

At some point of course, I required a beer, and a visit to the bathroom of the establishment.

There was an older guy four steps in front of me and we headed to the interior bathroom at the back of the cafe.

Normally in Germany.....there are around eight different ways to identify a guy's bathroom and a women's bathroom.  Sometimes it's done in stick-figure art, and sometimes, it's done in simple words.

Both the old guy and I stopped and tried to figure which door was the guy's room and which was the women's room.  Naturally, I'm from Alabama and it takes three seconds longer to figure things out which don't make sense.

It's a Bavarian slam on women, but the guy probably got it right.

In the US?  The sign would have been forced down in less than a week, with some judge ordering it removed.  In Germany?  Nothing.
at Tuesday, October 06, 2015 No comments: