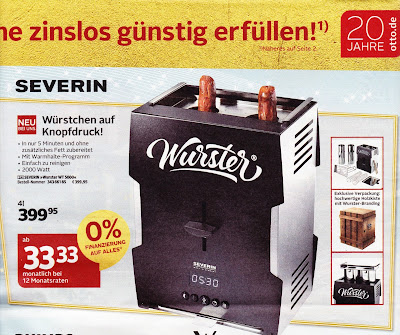 I get in Saturday's mail....these various sales leaflets.....for the upcoming Christmas season.

In an electronics brochure.....there's this wurstchen (a German hot-dog) cooker.

Now, I looked at this for several minutes.  It basically takes two German style hot-dogs.....grills them in some fashion for roughly five minutes (at a limited heat) and then pops them up like a toaster.

Yeah, it's got a clock and a timer.....and it comes in a fancy wood crate (appeals to the rough and ready guy).

Now, I admit.....it is German-made.  It's high-quality.  It probably would still be around with weekly usage.....even twenty years from now.  But would you pay $480 for it?

I brought this up to my wife as a potential Christmas gift.  It didn't go well.  She mentioned that she's got a high cost German stove, with a high-cost German pot, which I can fill with German water....to cook up my German-style hot-dogs (wurstchen).  Why should I waste 399.95 Euro on this?

I would be curious to know how many guys will buy this and if the company only made twelve of these for sales across Germany.

The sad thing....if you ponder upon this long enough.....is that there was some engineer who had the job of designing and testing this.  A graduate of some fancy engineering school.....with some fancy designation upon the end of his name.  He probably wasted nine-hundred man-hours designing this and it's a quarter of his entire resume.  You might be standing there one day and have this guy in front of you.....then you (HR) realize....he's the crazy guy who made the German $480 hot-dog warmer.  The question is....would you hire this guy?
at Sunday, November 29, 2015 No comments: