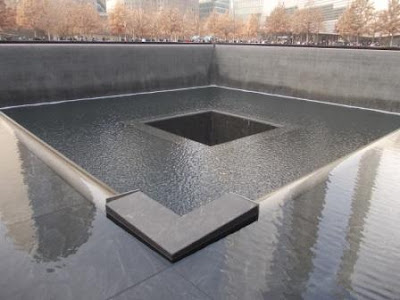 If you go to NY City, it's located down in the southern part of Manhattan.....near the Wall Street area. On the list of top ten things to see in New York.....I'd rate this within the group.  There is the indoor part and some waiting there....which I might skip.  The pool area is the area that I'd spend some time on.

It's a fairly moving memorial and on this Sunday afternoon in December....probably at least three or four thousand people around the two massive pools.

I made a circle around the two pools, and read the names quietly as I passed. 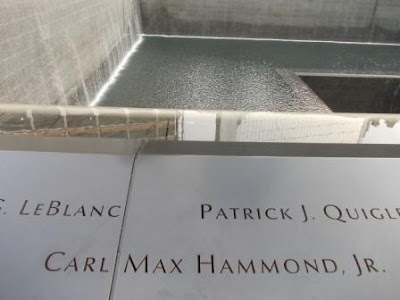 Then I came to this one point....Carl Max Hammond Jr.  The last name, being a family name which I know quiet well....stuck in my mind.

After I came back this weekend, I paused and looked up the story of Carl.

It is kinda interesting.  I don't know the guy and never remember hearing anything much of the guy.  Oddly, he is from north Alabama as well.....Huntsville.

Carl grew up in the Huntsville area....had an ample amount of science skills, and eventually ended up with a PhD in Physics.  The guy at some point packed up and moved to the northeast and got a job with Mitre working on government projects......and happened to be on a plane which was hijacked and rammed into the World Trade Center.

Generally, if you are a Hammond in north Alabama....you come from one branch of the family tree....the "Mister Jim" clan which arrived around 1819.  So he is a long distance member of the family.

The memorial draws upon you to reflect upon the moment and what these people went through.  2,753 people died at the Twin Towers.  Each had some element of contribution in life going on.  Some had promising careers, discoveries to made, or impacts upon science and life yet to be made.  Each cut short.

After a while, you kinda walk away from the memorial with this bad taste in your mouth.  Thugs crept through the holes of our system....intimidated us.....disturbed us in ways that one cannot imagine....giving themselves some brief moment of insane joy of doing something for a non-existent cause.  Maybe I'm in the one-percent crowd....but the memorial didn't work on me the way that it should.  I'm probably another ten-percent intensified about the negative nature of these thugs.
at Sunday, December 20, 2015 No comments:

The "Late" Letter Sitting There 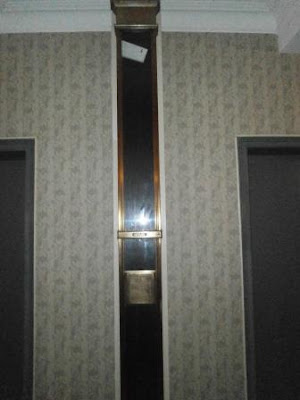 During my stay in New York City.....I stayed at the Roosevelt Hotel.  It was built in 1924 and was a fairly classy hotel for the next fifty-odd years.

Today, it's still a decent hotel....at least by three-star standards and has a lot of historic charm left in it.

One of the odd things that it has.....is a mail point on each floor where you could write a letter in your room....put it in an envelope, and drop it into a opening where it would be deposited into a mail-box in the basement.

Yes, the letter would float down via this glass casing.....all the way to the basement.

Well....I stood on the 12th floor a few times and admired this glass casing....where this envelope was 'stuck'.  It may have been there months....perhaps even years.

One day....a maintenance guy will come along and just happen to glance up and note the letter stuck there.....and get some coat-hanger to mess with it and drop it.  It'll appear.....perhaps seven years after being mailed and the receiver will comment that it's odd he got this letter from an old friend who passed away five years ago, and there will be some 'mystery' there for the receiver to contemplate.  What happened and where was the letter sitting for the whole time?

Sometimes.....folks get around to blaming the post office for a lot of stupid things.  In some cases, they deserve the blame.  But this is one of those oddball things that just isn't the fault of the post office.
at Sunday, December 20, 2015 No comments:

Your Tax Dollars at Work 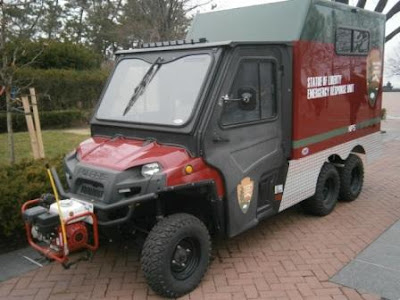 It's just one of those odd things you notice (Statue of Liberty Isle), when visiting NYC.

This was a customized ATV.  I stood and admired it.  The total cost?  I would take a guess that the National Park Service spent at least $100,000 to buy this and outfit all the stuff on it.  This is to serve an island area of roughly forty acres.  If you can the walking areas, there's maybe three miles of sidewalk.

The thing is.....if you look at much weight it's carrying....I doubt if it gets more than fifteen miles per gallon at best.
at Sunday, December 20, 2015 No comments:

I've spent the last week in New York City on a 'short' vacation.  To be honest, you really an entire week to experience NYC, but anything beyond that would be burn-out.....if you ask me.  So, my ten observations.

1.  Yes, people in NYC are that 'crazy' (as you might refer to Seinfeld's characters).  It doesn't matter where you go.....they just seem odd.  I might also note that I think over half the folks in the city are doing medical marijuana.....for some ailment or health episode.

2.  You are absolutely safe.  Cops are everywhere.  I don't think you can walk more than ten minutes in any direction without bumping into a cop.  I just can't think of a single occasion walking around town where I felt unsafe.  Even in Harlem.....it seems safe (I might have been stupid walking around).

3.  It doesn't matter where you eat or drink.....you'd best bring a ton of pocket money.  A single beer and cocktail will cost you around $22 (without the tip).  You want a steak dinner for two with drinks?  Figure $75.  Breakfast buffet at the Hotel Roosevelt?  $28, that's for one single person.

4.  A full-week's ticket on the subway system is $31 and probably the best value of anything you will come across.  It's the best way to see New York City and note some pretty bizarre characters that might entertain you either on the platform or in the cars themselves.  Yeah, the whole subway system is something out of the 1950s, but it's safe and a great way to get around town.  Oh, and that black mold stuff you see up on the ceiling....just don't pay any attention to it and wash your hands and face after you get out of the subway.

5.  Normally, mid-December would be a harsh time to do anything around NYC.....but this strange thing occurred while I was there.....the sun opened up and the temperatures got up to around 65 degrees.  I saw guys walking around in shorts and t-shirts one afternoon.

6.  You really don't know how bad traffic can be until you've gone to New York and tried to get from your hotel (roughly 14 miles) to JFK.  My limo guy just accepted it as normal, but on this Friday afternoon.....I even allowed myself 90 extra minutes.....it just barely worked out.  It took 130 minutes to cover 14 miles.

7.  The difference between Macys and Bloomingdales?  You could walk around Macys for hours and hours and probably spend $500 easily.  In Bloomingdales, it feels more like a show-room for upscale clothing and style, and you want to walk out after thirty minutes.  The thing is.....on the list of ten things you really need to experience.....you need to do a walk of both places.

8.  Ellis Island and the Statue of Liberty.  Generally, while it's best to go in mid-summer.....the crowds would make the experience impossible.  So, in mid-December.....I quietly boarded the ferry, quietly walked around the Statue of Liberty, and quietly did the tour of Ellis Island.  It was stress-free and without all the crowds.  Crowds basically make the whole experience impossible and lessen the whole experience.  I would offer this advice as well.....bring along some fruit or something to eat.....your offerings at either location are marginal.

9.  Walking in NY City.  A guy could easily walk ten miles in a single day and not realize it.  It simply makes sense to put on a pair of decent shoes and walk from neighborhood to neighborhood.  I'll admit, on a map display....walking from hotel X to point A....might take sixty minutes but it's the only way to see the city up close and personal.   This means you need a decent map, some idea of subway coverage (when you get ready to return), and a compass to give you bearings on direction.  As for asking for directions?  Well.....New Yorkers will rattle off a forty-word comment and simply point in a direction....it's best to just accept that and walk in that direction.  If you ask about the forty-word comment, this leads onto a 100-word comment, and then onto a 200-word comment, and eventually a 1,000-word comment.  Yeah, they do talk a bit if you let them.

10.  As a kid, I would marvel at the Today Show (NBC) background landscape around Christmas time.  There would be the Today Show camera guy giving shoots of the ice skating rink and the studio building.  Well, so I finally stood there and gazed at the ice skating rink.  At best, it's about the size of two plain regular basketball courts.  That's it.  You could probably put eighty skaters on there at one time (it'd be awful crowded).  It's awful small in relation to the image I had from watching all those shows.  And walking around the whole thing on Friday or Saturday night?  Don't go.....there must have been 100,000 people there on the night I went and it was massive chaos.
at Sunday, December 20, 2015 No comments: