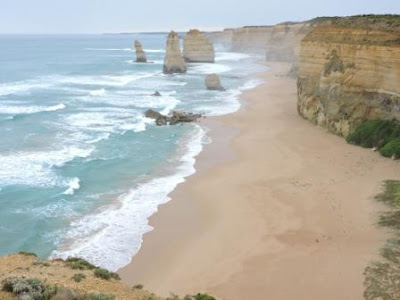 There are probably five or six mandatory things in Australia that you need to see, if you should ever make the trip.

One of those, is the Twelve Apostles, along the southern coast, four hours south of Melbourne.

This is probably a fifteen hour trip if you drive yourself, or twelve hours with some with bus deal.

My personal advice is if you can find an individual guide....hire them, and pay the extra money because they know the twenty-odd things along the way which makes this a once-in-a-lifetime day.

Shortly after you pass Torquay, you end up on the coastal road.  It's a two-laner, which weaves around the coastal region and passes through small towns which specialize as magnets for tourists. The beaches are mostly deserted and you can pull off at any point and just stand there on a million-dollar beach with just pure wind blowing in your face.  It's not a hot climate kind of place....like Florida and you probably can only wear shorts there for two months out of the year.

Down about four hours into the drive....you will reach Great Otway National Park, which features a rain forest type environment and worth an hour's stop to walk through a local trail (free). 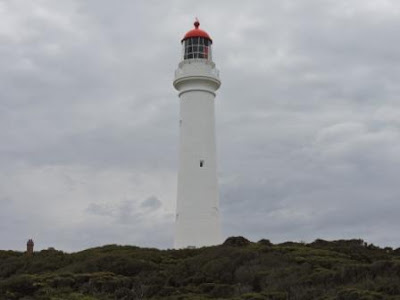 Around 275 kilometers into the trip, you will finally arrive at the Twelve Apostles.....a formation along the coast which has an observation deck area.  Plenty of parking and a rest-room.  You might want to note that there is a sign along the walk-way suggesting SNAKES.  They wouldn't put that up, unless there really were snakes....so just be aware of that fact.

It's the kind of stop that you might want to spend a good long hour there because you will never see something like this again.

I might suggest to drive on west to Port Campbell (20 min away), have some dinner, and try to drive north through the farm country, to reach A1 where you can ride at fair speed back to Melbourne.  In December through February, the sun doesn't really go down till 9PM.....so enjoy the back country and hills.

I'd strongly recommend you start the trip by 7AM and just hope by 10PM that you make it back to the hotel in town.