If you live in Alabama (where I grew up).....this week, it got brought up by US Senator Richard Shelby and the Governor (Bentley).....that unaccompanied illegal immigrant minors probably will be sent to the state as a temporary residence.

Both gentlemen said they'd fight this (they didn't say how and it invites the question of legal action).

This all revolves around a short document by the Office of Refugee Resettlement at the Department of Health and Human Services.

These presently are kids from Honduras, El Salvador and Guatemala.

All of this talk is mostly centered around Orange Beach in Baldwin County.  Now, it's an odd place because it's prime beach front lots....tourist hangouts.....drinking pubs....etc.

I sat and pondered over this.  You'd basically go and create some kind of dorm environment for underage kids.  How young?  The government is never clear about it.  I went back and read a bit on this.  Back in 2014.....some research group had noted reports of more refugee kids showing up....under the age of 12.  This isn't spelled out in real numbers.

You'd have to find the right type of rental property, and then go and find people to manage the kids....who happen to speak Spanish and want to be a house-manager of a dozen-odd kids times whatever number that actively want to put into the community.  It might be twenty.....it might be fifty.....it might be a hundred.  The Feds are careful not to say anything much.

Are the kids really underage?  Well, this brings in the other big issue....most of them arrive with no ID or paperwork, so they claim they are 13-years old.....when they might be 17-years old.  This puts the fed guys in the position of having to care for them....for at least five years.

The school environment?  Well, that's another little matter because most schools in the state aren't really hyped up on teaching English as a second language.

All of this adds up to cost, which comes out of some tax pocket.

But it brings up this wonderful scenario.  You might be some Gadsen kid....13 years old....and fed up with your step-dad or the attitude of your parents.  You sit down and learn sixty Spanish words, and buy a one-way ticket to Texas, where you hook up with some Honduras kids and get rounded up by the Feds.  Without any ID.....you confess your name as "Juan" and you lived your entire life in El Salvador.  You learned some English there and would rather communicate with the idiot fed guys that way.

So they take you off to some Alabama teen home deal for Latinos (under-aged) and you grow up for the next five years with some other Juans....pretending to be a runaway.

I know....it's pretty stupid, but it's the practical method of running some government operation without any real oversight.

Two hundred years ago.....no one from the thirteen original states sat there and could imagine some scenario where the DC crowd would push or direct people into your state, or dump a hundred foreign kids off.   So, here we are today....trying to imagine how this would all work.

The Day I Left Timex 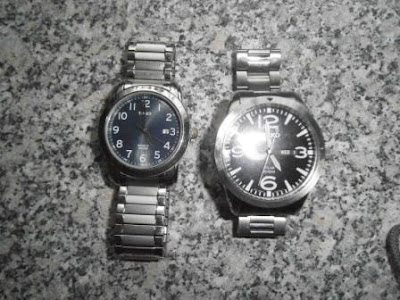 I have advanced to watch #12 in life, and changed one of my ten basic rules of life.

Around age nine, I got my first watch....a Timex from K-Mart as some birthday present.  It lasted around a year with the crystal broke in some farm-related incident.

By the end of high school, I had come to watch number three (it was also a Timex).  Watch number two also met an unfortunate end via a farm incident.

Watch number three actually lasted through to the end of 1981, when it just stopped ticking.

In 1990, I finally went to the Timex Ironman series (the same that Bill Clinton's daughter bought him for a Xmas gift).  The BX sold it to me for around $35.  Oddly, at least functionally.....this watch actually lasted for twenty-five years.  I didn't regularly wear it after 1998 but it was one of those watches that simply needed a new battery every three years and was absolutely dependable.  It's just that I got tired of the 'look', and dumped upon retirement from the Air Force.

By 2010, I had advanced to watch #10 (a Diesel)....the first time that I went outside of the Timex trend.  I actually paid almost $60 for the Diesel.  It lasted two years, and just quit working one day (unrelated to the battery).

I advanced to watch #11, a cheapo Timex from the BX, which ran for about $40.  This past month, I noticed that the two-year old watch no longer had an operating day-dial on it.  While it still keeps time and was 'almost' functional.....I decided to advance onto watch #12.

I came to this life decision....to go out and spend a fair amount of money ($200) and buy a real watch (a Seiko).  It's a violation of my cheap watch policy in life and I'll probably regret it. The thing is.....after many years of observation....Timex products have a life-span and a limited ability to handle day-to-day issues.  It's taken over four decades for me to realize that a better quality of watch might mean a longer lasting watch.
at Saturday, June 04, 2016 No comments: