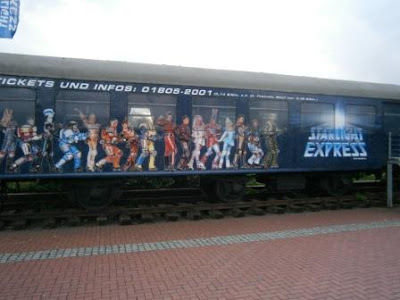 My wife says that at least once a year, I need culture.  This weekend....was that culture event....a trip to the musical show in Germany.....Starlight Express.

To describe Starlight Express, as a musical and show.....I'd say that some guy took an opera writer and engineer to a roller derby event in the US.....gave them both a fair amount of booze, and after two hours....they left in a daze.  Both saw something creative that they could do with roller derby.

So, this opera was written up.  Not really five-star songs or such, but a decent little rock-opera.  The engineer sat down and devised this arena area where 700-odd seats could be fitted around a stage where the roller derby members of the musical (28 of them) could shoot around them....at speeds of 30 mph.  Then he threw in some movable objects of a large size to be part of the show.

I sat a foot away from one path which circled the audience and you could hear the 'thunder' of the skates blasting away.

Over a two-hour period, I'd take a guess that every skater burned off 2,000 calories and had to sip a dozen big gulps of water to make it through one entire show.

To be honest, at least for me (a guy from Alabama).....I was more drawn to the skating ability and dangerous stunts, than the music from the 'opera'.

My recommendation?  If you are around the Bochum area of Germany (two hours north of Frankfurt) and had some wild need for culture and excitement......then you might want to check out the musical.
at Sunday, June 19, 2016 No comments: