What to Sip in Iceland 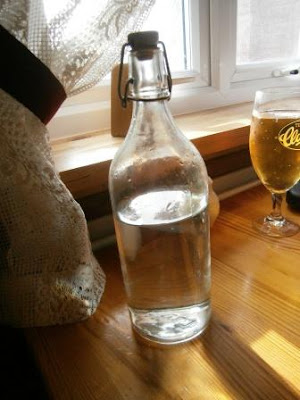 The one thing you notice in Iceland is that every time you go to lunch or dinner....these kind  restaurant folks come out with this great bottle of Icelandic glacier water....straight from their water facet.

It normally comes in a bottle as shown in the picture, and is awful chilled.

I have to admit.....it is one of the finer waters that I've ever tasted in my life and a guy could become awful attached to the taste.

Course, if you look to the right of the water.....is a glass of some awful fine Tuborg Classic beer.  A guy could become attached to it's taste as well, and I suspect they use glacier water to make it. It's in the 4.6 range for the alcohol rate.

The water is free, but the Tuborg runs around four bucks at a restaurant (it's not that cheap).
at Saturday, July 09, 2016 No comments:

Land of the Midnight Sun 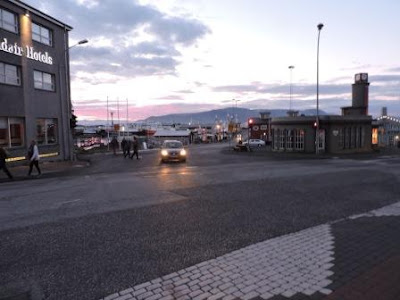 When someone says 'Land of the Midnight Sun'.....this photo is the best example possible.

This was a few minutes before midnight in Reykjavik.

A bothersome thing?  After a week, I have to admit that I wasn't getting used to this and the 24 hours a day of light bothered me.

In December, the opposite problem, with the sun rising around 11AM and setting by 3PM.

It kinda got brought up on Muslims having a big problem in this area of the world.  In the four-week Ramadan period.....from sun-up to sun-down.....you can't drink liquids or eat.  This means almost 20 hours of no liquids in the summer time.....for four weeks.

It is one of those odd things that you come to experience and realize how screwed up things can get with much daylight.
at Saturday, July 09, 2016 No comments: 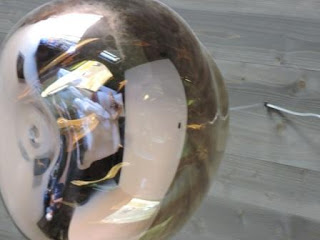 I stayed at a fancy upscale hotel on the south coast of Iceland this past week.  To be honest, I actually forced myself to pay roughly $350 for one single night in this place.  For a guy from Alabama.....it's a tough decision to make.

There were a bunch of fine things about this hotel, and it was right next to a glacier.....which probably helped to inflate the pricing of the room.  But it's the ceiling light that consumed my time in the room.

It's one big custom blown-glass bulb....probably twice the size of a basketball.  It has to weigh at least 20 pounds.

So I laid there in the bed.....looking up at the globe and kept looking at what was basically holding the globe there.....one thin electrical cable.  That was it. 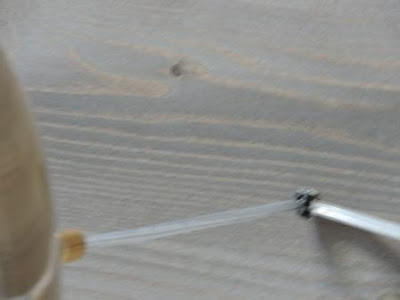 The place just opened in June and this was a fancy upscale place.  Maybe the globe light does make sense.  But you can just sit there and envision some night coming up in a year or two.....where this thin electrical cable will break and dump the bulb down onto you as you are sleep.  If it's thick glass....it'll probably hurt you pretty good.  If it's thin glass....it'll break and cut you up.

Cost?  Oh, I'm guessing this was a 400-dollar light fixture, that some interior decorator felt would add to the room.

This was one of twenty-odd features of the hotel that just made me question the value of the rates.
at Saturday, July 09, 2016 No comments:

If you stand back and look over the Dallas cop shooting (five dead cops) and the whole story.....you come to this observation.

In the late 1960s....there were X-number of cops and law enforcement in towns, counties, state apparatuses, and the federal government.  Today?  There are double, and in some organizations....triple or more.....cops that have been added to the system.  The question is.....are you safer now, or from the late 1960s?

Go look at your local small town cop force that had two guys on the payroll in 1969.  Today?  It's probably seven guys.  What do the seven guys mostly do?  Hand out speeding tickets, and traffic violation tickets.  They are a money-maker for the small towns, infuriating the general public (mostly the low-wage earner), and a sad comical force.

As we added more and more cops to the system.....we didn't really ask questions.  Joe would show up and just say he was the cousin of Marvin.....who was already a sheriff's deputy.....no real experience.

Some guys showed up with MP experience from the Army.  Some guys had five or six classes from some community college.  Some guys had an academy deal with some state organization.  Overall, we did a lousy job hiring people and in some cases....hired thugs instead of law enforcement.

Add in the aggressive drug and thug crime issues on top of the cop issue.  If we drug-tested everyone arrested in a normal year.....I suspect well over fifty percent have some significant drug in their system.  They aren't clean.

Then you come to the various mass movements started in the past six to eight years.....all using some dead 'hero' to get public appeal.  The news media is stupid enough not to ask questions anymore.....they just publish the banners and pump the message out to the public.

Social media?  Also part of the mass messaging system to the public.

Here's the general part to affect each of you.  If you live in a small town.....some nutcase meth-head will look at the shooting business.....get some stupid idea.....fire a round or two at the local cop, and suddenly, you have everyone in the town carrying a gun.....24 x 7.  Cops will react more often with a gun, and the public will do the same.

Bunch of shooting....scores of dead people.....and for what?

There is no fix for this.....other than accepting it as the norm for the next couple of years, and forcing a bunch of folks into the legal system for stupid stuff.
at Saturday, July 09, 2016 No comments: