This week....Esquirer (yeah, they are still around) printed a piece with their interview with Clint Eastwood.  If you didn't know....Clint is 85 years old and fairly sharp for his age. 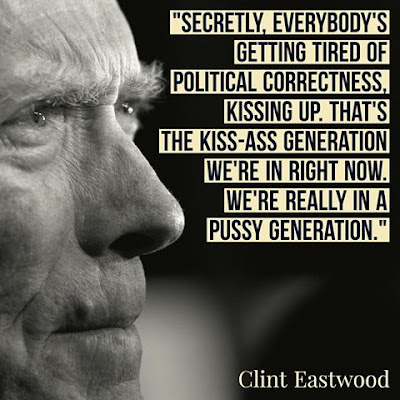 Somewhere in the interview, they got around to asking Clint about his impression of society today.  Clint didn't mix words.....he referred to them as the "pussy generation"....that a fair sum of people can't handle pressure, stress, reality, or such.  People are whipping up the word "racist" when they don't even have an idea what it means.

I think somewhere around the age of fifty....I came to this same reality as Clint, except I'd refer to it as a 'pussy society'.  Fakes, wannabes, intellectuals without any wit or common sense, thoughtless journalists trying to stir up some mess which has no validity, leaders that need to be fired and sent to the Wal-Mart tire shop to manage inventory, and dimwits trying to create the next great fraudulent gift to society.

People sit and work at the Washington Post, NY Times, CNN, ABC, CBS, Fox News, and whatever.....to create some fake wave of excitement that seems to get you hyped up for a day....a week, or even a year.  Sometimes, you stop for a second and start asking questions.  The wannabe journalists of today can't comprehend you doing that.....but it's some trait that used to exist in American society.

The questions will typically be....(1) what is you told me, and what did you forget to tell me in terms of facts? (2) Is there more to the story?  (3) If you slanted it.....why?  (4) If there is some agenda tied into this whole thing.....who benefits?  (5) If you did all of some fake agenda and in the end....no one really wants to punish the guy who started this.....what does it say about our society itself?

I think people had brains and enough cleverness to figure out the gimmicks....at least up to the 1970s.  For some reason, maybe it was just television's coverage, enough fake journalism, lobbyists heavily at work, or clever stories that just seemed too real to be fake (like the cause and trigger of Watergate....some naked photos of John Dean's slut wife with some other guys sitting in a safe within the Watergate hotel complex where the DNC headquarters was located).  When you tell people that today....they are mostly disbelieving of that angle and think it's some vast conspiracy angle.  Well....no, this was about naked photos of some gal embracing some other guys besides her husband.  Yeah, that was it.

Could society handle that one simple truth?  No.  So, we end up as some pussy society.....all faked out over a long and complex story which really circles back around to the safe and it's contents....the naked photos.

We've spent decades now....working up to the level of a pussy society.  We could recover....we could get some brains and start asking real questions.....we could filter out the crappy stuff and get back to reality (well.....back to the way it was in the 1960s).