The Fake Slant of a Story 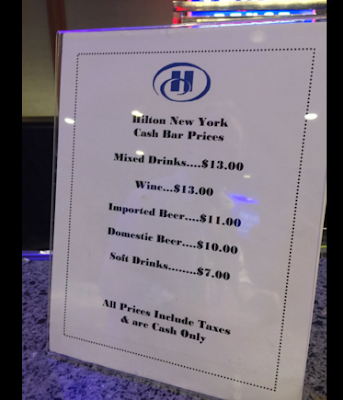 They hyped it as ultra expensive.

So either the reporter is some guy who came out of Waco, Texas or Guntersville, Alabama, and was expecting $6 beers, and $8 cocktails....or they wanted to hype up some bogus slant on an unworthy news item.

If you don't want a beer in the Hilton of New York City ($11 for imported Canadian stuff), then maybe you should have gone down a block or two and just stepped in some Korean "mom and pop" shop to buy a six-pack and drink out front.

Frankly, I've had it with journalists being so slanted that they can't really tell an honest story anymore.
at Wednesday, November 09, 2016 No comments:

So, after the smoke cleared this morning.....I will offer some folks humble advice:

1.  Polling organizations.  Basically, you did some great creative work over the past six to twelve months and made up some numbers which were fairly unbelievable.  Unless you can figure out your problem or issue....you basically won't be considered as reliable or capable.  You've got at best....maybe eighteen months to correct your situation, or start to feel the heat.

2.  WaPo or New York Times.  After a long year of cheering up some trends and hyping some bogus angles....you might want to consider readers and how reliable your material is now considered.  If you can't fix your problem in the hundred days....I'd suggest to bring in ten of your top paid people into a room and ask them to prove their case for their salary, taking a 10-percent cut, or just select the five least desired people to fire/dump.

3.  German intellectual journalists.  Well, you did a lot of creative stuff with the cartoon voice for Donald Trump.....the crappy pictures for Trump....and the slanted angles of 'copy' on Trump.  Now what?  You deceived your vast audience, and they are sitting there and wondering....just where did you get your material, or get this so wrong?  I'd drag in your German reporters in the US and ask them to start leaving the boundary of Washington DC or NY City, and actually go out into the general public....maybe visit Idaho....talk to some Tulsa barbers.....have some bar-b-q with some local Texans, and develop some real knowledge of the nation rather than this fake NY Times BS.

4.  CNN.  On the 'burning bridges' scale....you maxed out at a ten.  Toss in the question routine for the debates, and you look pretty lousy.  You've got maybe four to six months to correct your behavior and find some journalist morals.....or just accept the fact that a quarter of your previous audience isn't coming back, and that will relate to profit margins by the summer of 2017.

5.  Fake Republicans.  Your charm and wit....have run out of steam.  No one believes your slant on things and you might want to consider either early retirement, or resigning.

6.  Saudi Arabia.  For four decades, you held the keys to just about every American President.  Well....there's no key for Trump.  You can reshuffle things and just hope that some Senators are still on your agenda.....but their days might be numbered.

7.  Paul Krugman from the New York Times.  Paul, you need to take twelve months off and just drive across the US....in search of real people instead of just taking to other intellectuals like yourself.  Get a $12 haircut in Tulsa.....eat some hushpuppies in Florida....and have a beer or two with some farmers in Mississippi.  It might help to improve your perception of the nation and what priorities really do exist.

8.  President Obama.  You basically had eight years to help generate jobs and do something for the black community (something more than just speeches, fake accents, or false talk).  So after eight years....what is that you can say or hype up your message about?  Is it possible that the voters in Michigan and across several of your "win" states just added things up and had "fake agenda" in their mind?  Could you have done something to really bring change, and just screwed up big-time on that?

9.  Democratic National Committee.  Dump your IT guy and hire some professionals, who will build the right firewall and protect your emails.

10.  WikiLeaks.  You need to keep on doing what you are doing, and don't look back or allow special interests to manipulate you into being something fraudulent or fake.

11.  Mexico.  You've got around a hundred days to consider how to approach this fence business along the border.  Maybe you ought to take some progressive steps and just agree that the fence and better security...would make the drug trafficking trade a lesser thing, and push them to use the ocean more.