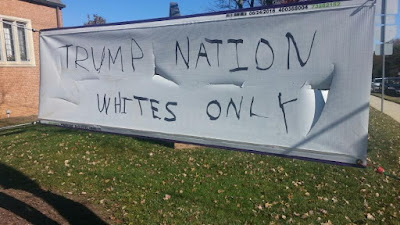 So, this is an odd story.

A church up in Silver Spring, Maryland....Episcopal Church of Our Savor....on Powder Mill Road....ended up a few days after the election with a vandal-type sign....racist in nature.

One of the church leaders commented: "I guess none of us realized where we were living,"

Having lived up in the region (Arlington is only 25 miles away)....the story picked my interest.

Silver Spring is an odd metropolitan city.  Population? 76,000.  Chief business?  US government offices for the most part, and a major urban area for a lot of the people who work in DC.

Politics?  Massive stronghold in Montgomery county (where Silver Spring sits).  In the Clinton-Trump race.....four to one results in favor of Hillary.  If you were looking for the Trump supporters.....they quietly occupy the area and probably are mostly employees of the US government.

My humble guess is that some dimwits from the local community.....probably even associated with the church in some minor capacity....thought to make up some hyped-up negative message and get sympathy drawn.

One of the odd figures on the sign is the low "R" in Trump.  Graphic arts student?  No, the lettering would have been better designed and displayed.  This is someone who just whipped up the sign.  Done alone?  No....because of the method of attachment.....it's at least two individuals.  Cops won't care and they won't waste an hour of investigation.  But I don't buy off on this being Trump-people. It's someone with a victim agenda.
at Tuesday, November 15, 2016 No comments: