The Fake World We Live In 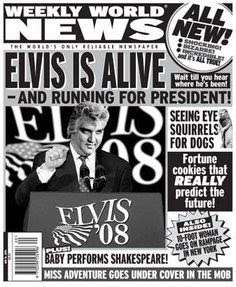 Twenty-five years ago, I used to pick up the Weekly World News.  I read it mostly.....because it was all fake.  Nothing in the WWN was ever real....you could depend that.

I sat down last week to examine this idea of fake news.

You can get up and watch two hours of the Today Show on NBC, and probably expect a blend of 50-percent reality and 50-percent fake. They do it so well now, that you might not even notice the difference.

On Sundays, you can go and attend some church service, which is blended with some scripture reading, some fake talk by the minister, and view some stirred up people who aren't really sure about where the real stuff and fake stuff get separated.

You can sit and watch shows like Amish Mafia, Storage Wars, or Duck Dynasty.....and get a dose of fake stuff.

Both the Republicans and Democrats engage upon so much fake stuff.....that you have pretender Republicans trying to pretend that they are Republicans....but doing a lousy job at it.  Even the President at times....goes through some fake act, and you just ask what the heck that was all about.

University operations?  They've done their best to convince you the parent and some stupid 18-year-old kid that $20,000 a year on some degree program is worth the money, but then you start asking questions and eventually realize that the eventual degree....is mostly fake and not worth the money you paid. The professors?  They work hard, but mostly lead you to ask just how fake they are.

The simple truth is that we can't see to tell a difference anymore.  Fake is a reality in our lives.

Some stupid teen will attend two years of college and get themselves all twisted into a frenzy.....yet not be able to structure a mature moment of observation and thought-process.  It's so bad now....that the teen will go into some fit and ask for a "safe-place" to comfort themselves.  And the safe-place they get?  It's fake.  Yeah....it's as fake as the fit that the teen was throwing.

How much of our lives are fed into this fake reality?  It's hard to say.....maybe fifty percent.....maybe even seventy percent.

So I came back to the Weekly World News.  I probably haven't read a copy in ten years....and I discovered that they quit production in 2007.  Reason?  Not enough business....no profit.  And now?  With everything virtually fake, I doubt that they could really exist.  It's funny.....society is so fake....they wouldn't even read the Weekly World News.  That says a lot.
at Monday, November 21, 2016 No comments: