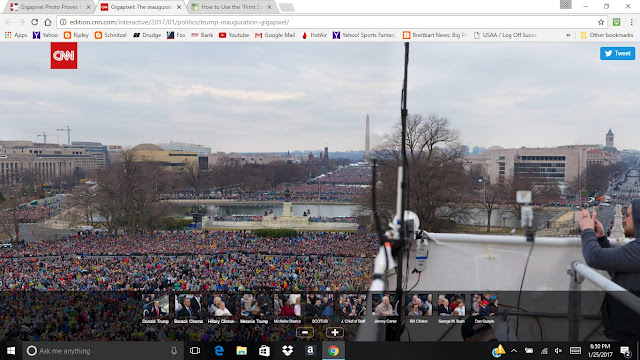 One of those odd shots that you just notice....from CNN.  Notice the crowd across from the Capital building?  Taken as the President was swearing in.  Note any small crowd numbers?  From the President's stand to the Washington Monument....lots of people.

Some folks in the last day or two...have wanted to hype the sales noticed on the book "1984" by George Orwell.  Factually, it's true...some trend is occurring.

What should worry some folks?

Well....if you read "1984", you will eventually reach a stage where journalism and politics will become a challenged thing.  It won't matter if you are a Republican, or a Democrat....you will not view politics or journalism in the same manner after the completing the book.

I picked up "1984" around the summer of 1979....reading it and "Animal Farm" over a brief one-month period.  It was one of those moments where you sat for an hour or two, and contemplating a lot of landscape.

For any journalist hyping up this increased sales trend and saying it's public disenchantment against the Trump administration....I'd caution them that "1984" could cause people to question a lot of things....including the Democratic Party.

You could easily have people now want a very open discussion about welfare, social gimmicks, environmentalism, BLM, taxation, etc.  You could have a million people wanting absolute transparency now.  Distrust in government?  It could be a bigger mess than one could imagine.  So when some wannabe journalist hypes the reading of "1984"....they might not really grasp what it means.
at Wednesday, January 25, 2017 No comments: