It was a 392-page ruling handed down by a court, that shakes the foundations of a government, it's culture, it's society, it's politics, and it's future.  In simple terms, from this day forward, you just can't bet on anything and be sure of much.

So it begins in Argentina.

The government sat down a couple of years ago and passed some legislation.  Basically, they decided that one particular company now owned most of the media within Argentina.....and this was triggering a shift in politics.  The company's theme?  More or less....right-wing.  So the legislation....could be considered pro-liberal.  I know some hate for these terms to be thrown around, but it is that simple.

So here are the new rules in Argentina.

First, no TV network can have more than thirty-five percent of the viewers.  No one is exactly sure on how you'd stop the the nation's viewers from watching.....but some political folks thought you could legislate this.

Second, no company can own more than twenty-four licenses across the country.  So your company could buy sixteen TV licenses and eight radio licenses, and then max out.

Third, to make this license business just a bit more complicated.....you as a company can only own one TV license (antenna or cable) in one city, and one radio license (same deal).

Fourth, future licenses can only be extended after a complete review of the ties that the company has.  You can sense that weeks, months and years could be woven into this review process.

Fifth, as the 'dump-your-ownership' game starts up....the court merely says that fair compensation must be extended to the lost license players by the government.  No one in Argentina is sure about how much this will cost....how they will pay....and who the final judge is on fair compensation.

Sixth, as the dumped license game starts up.....the judges didn't really say who would appear to buy or own the new licenses.  One can assume that a number of wealthy families might suddenly apply, but then find the legal review process taking months to occur, and weeding out their desire to own such a TV license.  Some community applying for it's own license, but with no real cash?  Yes, it'd be entirely possible for someone to rig up such an application.

Seventh, you can own one cable TV channel in a town, or own one antenna-broadcast network in town.....but you can't own one of each in the town.

All of this would somehow bring fairness and balance to a vast media parking lot.  Consider the fact that roughly two thousand licenses exist in Argentina through both TV and radio.  AM licenses barely hit 150 stations, and FM licenses currently run around 1,100 stations.  The rest?  TV licenses or cable TV type situations.

All of this manipulation is a problem that will require a full-time audit crowd and hustle up hundreds of lawyers to have various cases in court for years to come.

What it fixes?  Well.....if you wanted to manipulate a vast voting block....you'd work up the media to play your game.  You'd say that this would all bring fairness and non-manipulation into the system.

Here's the aftermath.  As companies divest themselves of stations, they begin to fall to lesser individuals or companies.....with limited capital.  Because you can't funnel profits from dozens of stations into buying programming or making independent productions....you resort back to movies from the 1970s, and gameshows.  Everyone starts to complain three years down the line about the quality of radio and TV programming.  Running Baywatch for three hours of the day....just isn't a practical thing.

But there's this escape clause in this mess.  The Argentine government can only manage cable and antenna-type operations.  They can't really manage satellite operations.  So what you should expect over the next five years....a couple of satellite networks that pop up.....all owned by the same company.  Satellite radio?  Comes to you via the same company.  They will escape this mess and the government will compensate everyone enough for lost licenses....that satellite makes perfect sense.

In a decade, almost everyone in Argentina will be getting their TV and radio via satellite, and through one or two companies.  It's that simple.  As hard as the dimwits worked to dissolve influence in politics....they merely created a new mechanism....that they can't control at all. 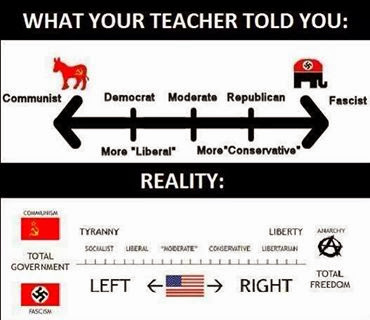 In high school, I suspect my last year of high school civics....was fairly wasted.  You memorized as much as possible for the tests, then forgot most everything within a month or two.

From the entire last year of high school, there was probably eight minutes applied to defining socialism.  I don't think the term libertarian was ever mentioned.  Anarchists?  That always led to the guys who killed the Hapsburg prince, and triggered WW I.  Tyranny?  It could only be spoken.....if woven into the Revolutionary War.

A kid in today's high school history classes?  He's likely getting some liberal teacher's view of the world.....all condensed into a format of easy eight-word sentences, with graphical displays.  Poor people are poor because of rich banks.....bankruptcy is triggered by greedy business operations....and life would be better if food production was controlled and run by the government.
The kid finishes high school....goes off into the world, and within a couple of years....has discovered a good bit of information that wasn't mentioned in school.  He or she....begins to ask questions and grasp simple economic concepts that would have taken an hour in school to get across.

Eventually, we come to this conclusion that high school was more or less a total waste after the ninth grade.  You should have been in trade school by age sixteen or in some college prep situation....rather than wasting three years on miscellaneous information that didn't really teach you much.

On the positive side?  We employ 200,000 teachers in this useless three year period of high school.....and help to keep them employed and teaching nothing. It's like teacher welfare, and it's a positive thing to keep those poor folks working at something.....rather than replacing transmissions, selling insurance, or managing a Piggly Wiggly.
at Wednesday, October 30, 2013 No comments:

Just the Way It Works

This is the way that it works.

Gus, Barney, and Wilber all got peppy and enthusiastic about politics and decide to help Senator Snuffy run for President.  Senator Snuffy wins, and the boys are invited to be "on the team" in Washington.

So in early January, Gus, Barney and Wilber arrive.  Gus ends up as a political appointee at the Agricultural Department....but he'd admit he knows nothing about farming, agriculture or economics.  Barney gets placed over at the State Department, but has a degree in journalism and has only traveled internationally to Aruba.  Wilber arrives at the CIA to be a political appointee, but has only background in IT sales and the used car industry.

The three spend spend their initial month....getting accustomed to their fourteen by twenty foot office.  They ask for newer furniture.  They want the state-of-the-art Blackberry free of charge via the gov't job.  They are frustrated over the sixteen minute walk from the parking lot to their offices.  They hate the forty to sixty minute drive into work and continually talk of taking Metro.

The permanent folks try their best to introduce the three to the "real world".  Briefings are passed around.  Knowledge packages are developed.  Somewhere in the mess....Wilber and Barney get a highly classified package explaining some very critical and important government programs.....all sensitive in nature and complex to the degree that you need an entire day to read forty pages.  Wilber and Barney basically spend ten minutes reading the info, and toss it to the side.

Senator Snuffy?  He's asking for new furniture, talking big to lobbyists, getting into a new golf schedule (three afternoons a week), writing more speeches to make his blessed voters happy, and mostly missing introduction briefings to various programs that he ought to know but doesn't care about.

Across the nation....every four to eight years....we repeat this process.  We bring in idiots who get political appointee status and sit there.....thinking they run the actual process.....when in reality, without knowledge or understanding.....the process is running them.

This week, we had some senators confess that they just didn't know nothing about surveillance of international leadership.....even though they sit through the briefings and get weekly update status reports.

We had a President admit that he just didn't know anything about surveillance of international leadership......even though he sat there through briefings and got weekly update status reports.

In three years, a fair sum of these folks will move on and a new naive crew will arrive.  In the Senate, we will continue to rely upon some dimwits who claim they know all....when they know nothing.

There's something wrong here.  But it's best not to say it in public....or you'd just get folks upset.
at Wednesday, October 30, 2013 No comments: