After roughly three weeks in New Zealand, you come to notice a number of things about the two islands.  Combined, the population is 6.4-million and growing.  The south island is the lesser island, with roughly 1.1-million.  The north island with 5.3-million.

The north island has Auckland, which is a magnet now for business and technology start-up operations.  I might add that it's also a major magnet for Chinese immigration and business-start-up shops.  You can draw a 40-mile circle around Auckland and probably find almost half the population of the island in that metropolitan area.

The connecting force of the north isle is Route One (going from Cape Reinga on northern most tip), to Wellington (the capital) on the far south of the isle.  It's safe to say that Route One has intense traffic and always in some stage of renovation.

I had this unique experience traveling north, when the cops closed off Route One because of a truck accident, and put everyone onto a dirt-road situation.  It was a 12-mile detour along a road that you'd typically avoid....and find yourself on a cliff-road where you might fall 200 feet easily if you went two feet further to the right.

The landscape?  An American would say it looks an awful lot like Washington state (with the Volcanic-like landscape) and Tennessee (with the rolling hills). There's some point where I ventured off Route One onto Route Four....discovering a mostly rural area, cattle ranches, and small towns with just a gas station and general store.

The south isle?  It's the mountainous region....more like the Alps of Europe than anything else, which takes up maybe one-third of the south isle.  The rest is mostly flat, farming land, and this is the region that typically draws a lot of tourism.

Christchurch, Queenstown, and Invercargill make up the bulk of population in this region.

Why do people want to migrate into New Zealand?  I think it adds up to four simple feelings:

2.  The weather isn't that bad.  Summers are generally mild....maybe into mid-seventy to mid-eight range.  It does rain a fair bit but that gives you the 'green-look'.  Winters (especially on the far south), can offer up snow.

3.  Low stress.  You see a minimal amount of stress in just about everyone.

4.  Everyone claims to be an expert craftsman, transmission mechanic, grill cook, carpenter, and animal vet.  Once you get beyond Auckland, you kinda notice that things are rigged up in a fixer-up kind of way and folks make due with the limited knowledge that they have.  You could call up some neighbor and mention that you had brake issues, and he'd come over with his tool kit, to offer up his vast knowledge (enough for four 3x5 cards) and fix the issue.  I think people are impressed with this attitude about getting the job done.

But all of this immigration business is driving up home costs, and it's a shocker to note that homes around Wellington and Auckland will easily run 500,000 to one million NZD (340,000 to 680,000 USD).  A decent home with real property?  You'd be talking about 800,000 USD easily.  All of this is begging for light rail growth and home development forty to sixty miles away from the metropolitan areas.

I stood one day in Queenstown and admired the bank-real estate ads....noting a simple one-bedroom condo could run you in the range of $250,000 USD easily, if you were within the city limits.  We took off one day from the airport to fly around the range.....and you could see tons of growth around the airport with forty-odd buildings being constructed (banks, grocery operations, hotels).  If you made it into Christchurch and noted the construction efforts from 2011 earthquake episode, there's probably well over 3,000 construction guys at work.  There's probably enough work there to guarantee a stable work situation for at least ten more years.

The thing though that gets into your mind after a while.....you are at the edge of the Earth.  Getting anywhere with civilization (like Auckland) might take you two hours in the air.  Getting to Australia?  Maybe 3.5 hours in the air.  There are some folks on the extreme north of the north isle....who might only get into a real town or real grocery....maybe four times a year.  As much as the landscape begs for you.....the reality is that you need to accept limits on your life.
at Tuesday, November 21, 2017 No comments: 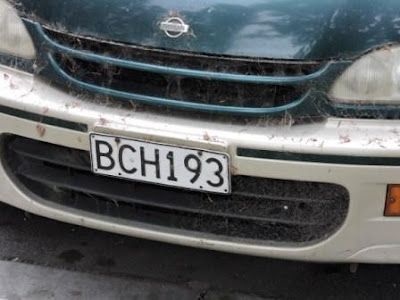 After you've been in New Zealand for a couple of days, you tend to notice....spider webs.

Take a close-up view of the car.

Anything that sits idle for six to eight hours.....likely gets the attention of a spider.  I don't know the variety or if it's a killer....but they work their butt off.

This was a car parked along a city park....probably for six hours.

You see this on buildings, trees, and just about every vehicle that rests.
at Tuesday, November 21, 2017 No comments: 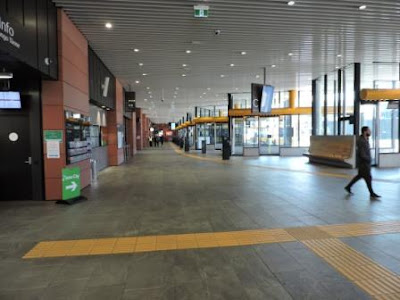 I typically don't blog on bus stations....mostly because they are about the last place on Earth (at least in Bama) to hang out.

However, on this vast trip down to New Zealand, I came to Christchurch....where they had the earthquake from 2011.  In the middle of town, virtually everything was wiped out, and they rebuilt the center of town.

So there is this state-of-the-art bus station....the kind of place that you would dream about in a thriving community.  Roughly sixteen gates are rigged up....all with automatic glass doors and a TV to note bus X has arrived and ready to accept passengers. 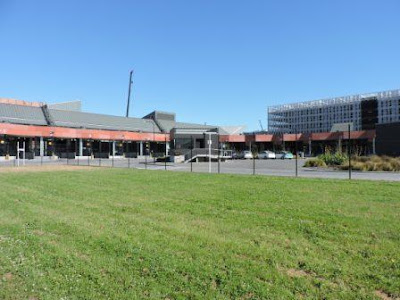 Marble floor.  Security cameras around the area.  A cop or two.  At least three coffee shops.  Open space for at least 3,000 people to transit from bus to bus.

In the middle of the 'yard', there's a control booth....with communications to each driver making their way around the city.

Fantastic design and the kind of place that you would dream of.  But here's the thing....it only occurred because the old station was literally destroyed and they had the state giving them tons of money to rebuild the center of town.  Otherwise, they'd probably never get this type of serious money.  Cost?  Unknown, but it had to be in the five-million US dollar range, with all the gimmicks included.

Oddly, no junkies or homeless guys hanging out.  Course, I think the cops are all over folks to avoid bringing their problems into the facility. 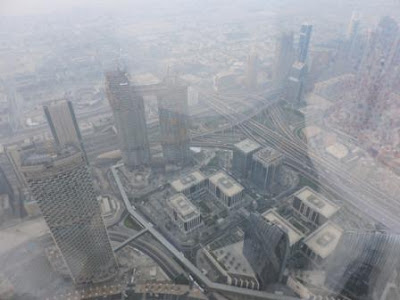 In mid-town Dubai, there's the main attraction of Dubai....the tower.

So, I made the trip.  First, you need reservations.  Just about everyone and their brother want to go up to the top....particularly at 5PM to catch the start of the sun going down.  The sad thing is that you need to think about things like this six weeks prior and get your reservation into the system.

So you get to the entry point, and then you realize the traffic flow, there's at least 4,000 people lined up in different segments to make the trip to the top....like a her of cows.

You walk through this tunnel, and then onto this other tunnel, and finally get 25 minutes later....over to the elevator.  It's hot as heck inside of this elevator.

Then you get to the top, and gaze out at.....well....a sandy colored landscape.  I doubt if you can see clearly for more than 500 feet.  I asked about this, and the guy said this was normal.  So you looked at the images of the city....sandy-colored....and asked yourself why you paid out so much and was this really worth the trip.

I've been in probably twenty towers in my life and it's always an interesting view.....well....up until this point.  I probably spent 2.5 hours in some line, or processing through the episode, and it took eight minutes up there to convince me that this was worthless.
at Tuesday, November 21, 2017 No comments: 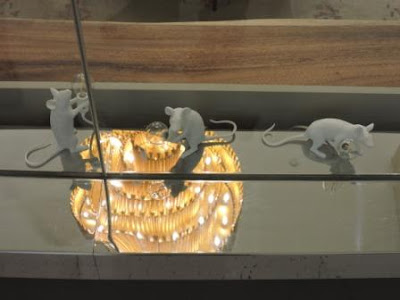 Yeah, it looks awful gaudy and cheap.  I actually walked in and priced it....roughly $25, for something likely made in China for $2.

Putting that on display in some home?  It'd take a nutcase probably.  Back in the old days, I would have bought this and taken to the office for display on my desk.  But in this case, I just walked on by.  I bet they sell at least a dozen of these each week.
at Tuesday, November 21, 2017 No comments: 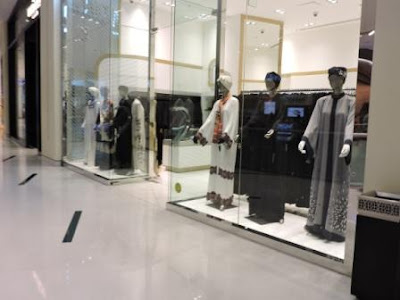 Most of my life, I've often wondered where a Arab guy goes for his robe outfit.  So in the middle of the Dubai Mall.....you have a fine men's robe shop.

I stood there in front of the place for a good two minutes admiring the outfits on display.  Not that I'd buy one, but it's a display that you just never see.

Cost?  It's like fine Italian suits and you'd need a thousand to get anything they had.

In the entry of the Dubai Mall....there's this shop on the side which sells popcorn.  Naturally, I stopped and bought a bag. 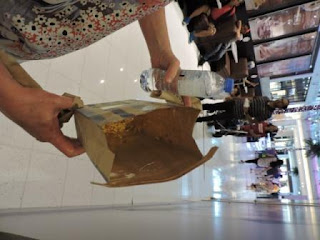 First, I must admit this was the finest popcorn that I'd ever eaten in my life. My guess, it had at least 300-percent the normal amount of butter added to it.

Bad for you?  They had some mega bag that they would sell you.....I just bought the regular bag.  I'm guessing the mega bag would given you a minimum of 700 calories with popcorn and butter together.

As for butterly hands at the end?  You needed to wash up bad. 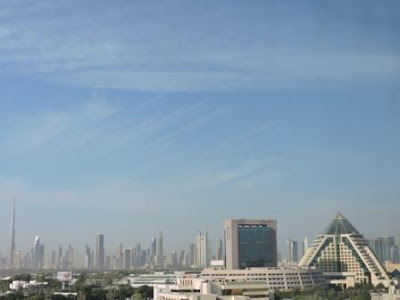 I wrapped up a three week trip.....Dubai for a couple of days, and the rest all in New Zealand.

So, some comments on Dubai:

1.  Beyond the Mall, it's a limited number of things that you'd go to Dubai for....VERY limited.

2.  Looking for any pork products?  You can just about forget that.  I sat and ate some sirloin steak pizza one night....which just doesn't work with pizza.

3.  Folks at every single hotel go way out of their way to be nice.

4.  If you've never been to the Dubai Airport.....there's no airport that reaches the level of 'look' that this airport has.  Just the bag-pick-up area by itself.....is big enough to put forty basketball courts there.  If you walked into the Emirates business-class lounge, it's big enough to handle over 3,000 people....with five different food courts.

5. The Mall?  You could start at 8AM and I think you'd still be walking at 6PM....fairly amazed.  The thing is...you'd need to start out with at least a thousand dollars in your pocket, and expect most to bw gone by the end....easily.

6.  As bad as traffic is in New York City, Dubai is pushing to have even a worse traffic flow problem.  For a 15-minute ride to the airport, I had one hand on the door handle at all times, and kinda surprised how the driver avoided accidents.

8.  Every single employee?  Except for the guys at the border control point in the Airport.....everyone is a foreign employee.  A lot of Russians, Ukrainians, Philippine folks, and Egyptians.

9.  Even in November, it's still fairly hot.  And if you hung out for more than an hour....you'd be sunburned a bit.