How to End 'ObamaGate'

With twists and turns, it's now obvious that dozen-odd people (Clapper, Comey, Rice, etc) in the White House circle are involved in the production of ObamaGate.  Down from them?  Probably another twenty to forty individuals....some who naively believed that they were 'smart' enough to get away with various unethical acts.

The Grand Jury action will consume much of 2020, and by January of 2021....with President Trump going into his second terms.....I would suggest the following way to end the ObamaGate situation.

Before anyone gets into court action but to the extent that they've had lawyers attached and eating up their savings....I'd send AG Barr off to former President Obama.  He will have two confidential scenarios/agreements to offer.

1.  Admit that he (Obama) directed all of these individuals within his staff (list them, their charges, and the amount of jail-time anticipated).

If Obama admits that he directed this....all individuals on this listing will be pardoned, without any court-action....with the exception of former FBI director Comey.  Comey's case will continue on.

Within this admission, will be the fact that Flynn was screwed on, on Obama's orders.

The agreement will state that President Trump then issues a full and absolute confidential (secret) pardon to President Obama. None of the pardon information will ever be released, unless conditions are exceeded.

With this agreement, President Obama will agree to avoid and not conduct any interviews (for any reason, within the US, and beyond its borders) for a period of eight years.  This means book interviews, TV interviews, radio interviews, etc.

In addition, no books, essays or newspaper articles will be written by President Obama for the same period of eight years.

In essence, he's doing an eight-year period of exile.  If a violation occurs within the eight-year period....all data from the investigation will be released and identify precisely what this deal was about.

2.  If Obama refuses the deal....then full-speed ahead for the players involved in this episode, and full-court action proceeds.  Attached to this situation will be a blanket pardon for President Obama, and all evidence gathered in this episode will be released to the general public at the conclusion of the last court case.  This will include the information on orders given by President Obama.

I know....it's a stupid way to end this whole thing.   But if we proceed through and jail fifteen to twenty White House players.....it makes the whole period between 2008 and 2016 look like a joke.  It's best to just proceed on.  And in this case, if you exiled President Obama for eight years, you'd get an ending to this whole mess.
at Tuesday, May 12, 2020 No comments: 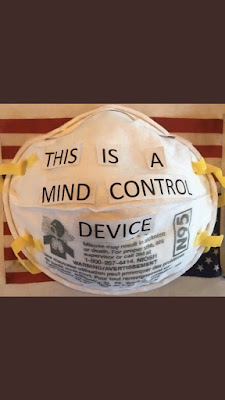 Years ago....1978....I arrived at my first Air Force base, and they handed me the gas-mask for the first time.

After suiting up and putting the stupid mask on....I remarked to the instructor, that breathing through this was going to be awful hard.  Then he spoke to the necessity that I might be wearing one for a full 12-hour shift, and doing fairly strenuous work.  I sat there and thought, this was going to be fairly impossible to breath and actually do work.

Almost yearly, we did the three-hour class, and occasionally would attempt to do an hour or two of work....to reinforce the idea that you could do something while wearing the mask.

My general perception, after 22 years of service was that you might need that stupid mask, but in any type of physical labor....you'd probably have some anxiety attack, or huff yourself into a fainting spell.

Around eight weeks ago....I bought one of those N95-masks, because of the stupid virus stuff. After trying to wear it one day at a grocery (for about an hour of pushing the cart around).....I was shaking my head.  You couldn't get enough oxygen, and I could tell....if I'd continued on for three or four hours....I'd be having some type of huff/faint spell.

So what's this mask deal about?  It's mostly a mind-game to convince you that you can wear it and avoid getting the virus.  I understand this part of the game.  Oddly, these German experts back in early February made it very clear....the mask has marginal pay-back.  It makes you, your associates, your boss, and the folks on the bus or plane....think....at least in the marginal sense, that you are saving yourself.

The problem I see....about four hours into this wearing of the mask, as you collapse in the office hallway and some freaked out administrative lady will go running down the hall yelling about Covid-fainting or Covid-attack.....it just makes things worse off.  Some ambulance crew will come and tote you off, with folks talking of a dire Covid situation for you, and Bob (the part-time Baptist minister) offering to do office prayer over your anticipated demise, while you sit in the ambulance and try to recover from just a fainting spell.
at Tuesday, May 12, 2020 2 comments: