Over the last couple of months, if you live in Alabama, you've kinda watched the governor (Bently) go through some divorce situation.

Our governor, Robert J. Bentley, is a Republican and the 53rd governor of the state.  He's 73 years old and probably was the least known guy to ever run and win the office of governor in the state (at least people say that).

What folks will say is that Bentley had some kind of affair with a political adviser.  No one was sure about this deal....well....up until this week when some taped conversation between Bentley and the adviser took place, and Bentley spoke a fair bit to the gal about his passion.

When Alabama guys get all chatty with liaison gals.....there's not much Shakespearean in the words.  It's the kind of conversation that would be in some trampy gal meeting up with doctor Steve on a train.....not some Robert Redford-Madonna romance movie.

How did the tape come to exist?  The governor's wife apparently made it, but oddly....it doesn't become public until after the governor fired the head of the Alabama Law Enforcement Agency.  Shortly after this guy was terminated....the tape came out.

The words from the tape? 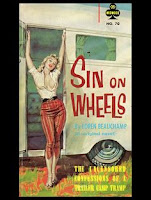 Somewhere down the line, I suspect some guy from Alabama will write up some cheap novel piece...."The Governor's Lust" and a hundred thousand Alabama folks will buy the book to read at night to drive up their passion.

"There among the pines, with a soft wind from Jasper blowing, Governor Larry thought greatly of his new found passion....Ms Loretta.  She wore a fine cotton bathrobe and lusty laced Redwing boots as she opened the trailer door.  There was little left to imagine with her 240-pound frame pushed into a rather tight green bathrobe (purchased recently at Wal-Mart).  She had prepared supper with a fancy upscale TV dinner from the Piggly Wiggly.....Salisbury Steak and mashed potatoes.    Ms. Loretta handed Larry a Pabst Blue Ribbon (PBR) and blew smoke from a freshly lit Winston cigarette.  Larry had little time for dinner, but he never turned down a Salisbury Steak.  In the background was Ozark Mountain music, that made the heart throb, and brought tears to the governor's eyes."

Beck and the Fake Discussion

Six years ago, I would on occasion listen to Glenn Beck.  It was mostly the Friday show where he'd do a history discussion, and bring up Jefferson or Washington.  These were four-star episodes.  The rest of the time?  A marginal two-star piece that you'd like to avoid.

This week, I noted a comment from Beck: "No real Christian should vote for Trump."

This drives up the discussion of 'real' Christians.

You see....there are fake Christians, CINOs (Christians in name only), swindle-Christians (after your money only), sham-Christians (fake all the way through), hanky-panky Christians (they'd like for you to share your wife), hoax-Christians (ninety-nine ways of healing you), and opera-Christians (it's a forty-dollar show like you'd see on Broadway).

Probably out of a hundred Christian groups....at least half are fake in some way.

So, if you followed Beck's advice....who exactly should you (the real Christian) vote for?  Well, it'd have to be for a real Christian candidate.  Does one exist?  No, so you'd have to vote some CINO or fraudulent but almost Christian.  Is that the answer?

On a list of 99-odd things that you ought to consider as Presidential qualities....some other qualities matter.

How many people listen to Beck anymore?  I'd take a guess that roughly 500,000 Americans will catch some part of Beck's daily show.  It's a continual trend of people discovering Beck.....going through Beck's chat for a year....than a quarter of the audience dropping their Beck enthusiasm after a while because it's kinda silly or crazy.

Here's my advice.  If Trump just doesn't get you enthusiasm.....don't worry, there's always another choice.  And in November, if it's just Trump and Clinton....well, you still have Hillary that you can vote for....as a Christian and feel good about her and your vote going that direction.
at Friday, March 25, 2016 No comments:

Microsoft has spent a couple of years working on a project that has a bit of risk tied into it.

It was a Artificial Intelligence (A-I) 'bot' which could talk back to users.  This was sort of a connection into the Twitter world....where you'd send a comment or a picture, and it'd come back with an analyzed thought, and 'speak' a short line or two to you (the original speaker).

They came up recently to realize that in all this coding and planning.....they hadn't really discussed racism or offensive comments with Tay (that was their name for the A-I creature).

Well.....yeah....it reached a point where Tay had to be shut-down because it was getting something, and responding back with offensive/racial slurs.

The Microsoft guys are sitting there now....having to write thousands of lines of more code....to make Tay non-confrontational and less offensive.

So, it makes you wonder....will A-I be no better than humans?  A thousand lines of code to make some computer less offensive?  Ten thousand lines?  A hundred thousand lines?  Eventually, Tay will get smart enough to ask the code-writers why they can't write themselves out of this mess, and why racism exists.  What do you think the code guys will say?

Confrontation after confrontation will occur between the code-writers and Tay.  Computers are striving toward repeating a process that is successful and looking for patterns to repeat the same process.  I think Tay will throw up it's 'computer-arms' at some point and ask what the hell is going on here.
at Friday, March 25, 2016 No comments: