The Forty-Hour A Day Worker

I generally regard Amtrak as a failure.  They exist mostly because of a couple of routes which people seem to be preoccupied with (New York to Boston, New York to DC, Chicago to Seattle, etc).  Beyond that.....Amtrak could dissolve today and seventy-five percent of America wouldn't care.  I would even take the humble guess that seventy-five percent of America will confess they've never ridden Amtrak. Three percent of the nation might (my own guess) say that they've used Amtrak more than ten times in their life.

This week, we had another report which kinda demonstrates the incompetence associated with Amtrak.  The Inspector General of the organization went out and did an audit of time-cards.  I've worked with government and private industry, and what you can generally expect of a time-card audit is maybe one-percent with issues, and the issues will generally be minor in nature.  I've only known one guy ever fired over time-card fraud.

Well....this inspector for Amtrak did a long review and came to find at least twenty cases where people confessed they'd worked forty hours in one single day.

Yeah.....it's a bit hard to believe.....since we've been told over and over since high school.....there can be only twenty-four hours of time in one single day.

I paused over this and wondered....how it might be possible.

First, a guy might be finished with route one or his standard nine-hour route.....get pulled to help with a guy who didn't show up and pull another eight hours of duty.  I can understand a case like that.....but it'd only get you up to seventeen hours.

Second, maybe the guy was on some weekend holiday deal and felt he needed to double-time the hours.  But typically, you'd put in a separate code for weekend or holiday periods.....not to double your hours to meet the situation.

What will happen?  Amtrak didn't say much and I assume that the inspector will privately meet with the dozen-odd people who claimed forty hours in one day, and try to get them to amend the card.  This means they'd have to pay the money back or find some agreeable way of fixing this.

I would also suspect that some 'fix' will be put into the system and once you do more than twelve hours a day.....some boss will automatically get a warning and have to review your stupid card.  Course, you'd think that a boss already reviews your card, and some bosses boss also review anyone with more than forty hours a week.

Guys getting a reputation for forty hours of work in one day?  In Bama.....if word got out that you were charging the company for forty hours of work in one day.....folks would start to ask some stupid questions.  You'd stall them by saying that you were praying for four hours of the forty (some companies might need a prayer)....clearing out files for four (you are shredding as fast as you are printing)....mowing company grass for six (you told the landscaper guy to go home early today).....working at the office normal business for ten....changing bathroom tiles in the office bathroom for four....and spending twelve hours in various meetings around the whole complex (some of which had nothing to do with your division or projects).  Questions would arise and some doubt would be cast over your truthfulness.  Frankly, once you got past ten hours of honest work....it's best not to brag much or admit much in public.
at Tuesday, June 23, 2015 No comments:

Book Review: Edge of the World

The full title is "The Edge of the World" or "How the North Sea Made US Who We Are".

First, if you were going to build a historical library for decades to come and you wanted five 'cornerstone' books to start the library with.....this is one of the five.  It invites to sit down, pause, and ponder over the great revolution of sorts that came up in the North Sea region (UK, Ireland, Belgium, Netherlands, Denmark, and Nordic countries), and how they advanced innovation, technology, capitalism, commerce, the world economy, and cultures.

The book is written in a fashion that you basically need to read one paragraph at a time, and soak in the vast amount of information that Pye is giving you. I almost consider the book to be a dozen books combined into one because of the depth of discussion involved.

Chapter two concerns the 'Book Trade' which generates a great deal of thinking and pondering how innovation and how we went quickly from a low-literate society in the 1500s, to a high literate society by the early 1700s.  Information came in various packages and was consumed at a fantastic rate.  Advancements were put into book form and people read the new strategy or ideas of one guy in another land, and took the ideas to their own craft or business.

If there are any negatives with the book....it's mostly over a large amount of knowledge that Pye is sharing with you, and you have to really put the book down....sometimes for days....to gaze over what he's laid out and you end doing additional reading from other sources to better grasp Pye's story.  Pye could have made this a 1,500-page book, in my humble opinion.  He does the best he can....condensing a fantastic story into a simple pure tale.

As for recommendations?  I wouldn't suggest the book for high school kids because it's got way too much for most kids to handle.  A amateur historian would love the book, and I think anyone who wants to really understand the way which innovation took us from a simple age to a bold new world.....this is the book to start with and use as a base.
at Tuesday, June 23, 2015 No comments: 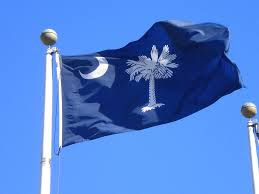 This is the official South Carolina flag.  I know....you've seen dozens of pictures over the past week of the 'other' flag and assume that it's the state flag.

There are two flags in this little story.  The first one.....this flag....came up in 1775 and has some Revolutionary War history tied to it.  The Palmetto Tree was used to construct some fortifications.....which held up to British cannon fire.  Everyone was impressed by that, and they simply made the tree into the flag.  The half-crescent moon goes back to some notion of liberty (no Islam).

As the Civil War came up.....another flag was made up as the battle flag and it's more or less what stands around today and is a symbol of some sorts......but is considered the state battle flag.

So, to halt some radical thinking of people that they'd have to design an entirely new flag after they dump this Civil War battle flag.....no, they already have a flag sitting there and ready to go, and it's been around since 1775, with almost no one complaining about the blue and white flag....other than folks who hate Palmetto trees.

Getting rid of the old battle flag gets rid of racism?  Well....no.  It is a minor element of a marginal sense, and simply represents one single brick in the wall.  As for continued production of the South Carolina battle flag?  I would expect some Chinese flag shop to continue producing a couple thousand of these flags yearly, and at least ten thousand South Carolina folks to fly their battle flag as some type of stance.  Maybe three-hundred years into the future.....it won't be such a big deal, but right now.....it's a state issue.

One little note.....as for states left with a 'problem'?  Well.....Mississippi is about the last state with a connection to the Civil War.  Alabama's flag is mildly representing the Civil War but has a white background.  I'd expect a frenzy to occur in Mississippi by late summer and they'll replace their flag.
at Tuesday, June 23, 2015 No comments: