The Thing About Risks

I sat and read over this report and analysis.

Growing up on the farm in Alabama....by age fourteen, I'd come to grasp the implications of threats and potential harm.  If you standing in a cattle-chute and a 600 pound steer has turned around in some moment of panic...you have basically two seconds to assess the situation, grab the side of the rails...to hang on and just hope things work out fine.

Over the next twenty-two years in the Air Force?  There's probably another twenty-odd occasions that I came fairly close on the risk-scale.

The thing about it....guys tend to accept risk more than women.  You could present the same opportunities to a hundred women, and a great majority would just look at things, and say 'no'.....this has no balanced return value for the risk involved.

Could we restructure women, while they were six years old....to view risks as a positive thing?  Maybe.  Course, we could go the other way, and instill a woman's view of reduced risk on guys, and stand back to see if guys just refuse to take risks?

It's something that you kinda wonder about.....should we even attempt to change things or remove risks in general?
at Saturday, May 16, 2020 No comments:

The Problem With Rules

"In California our rule is if you play by the rules you get more rules. There’s no rules for people who don’t follow the rules."


At some point in my early 30s....I reached a point where I just generally looked at the landscape and said is there anything forbidding me from going and doing 'X'.  If not, I just proceeded on and did it without asking permission.

There's probably a fancy management term  for what I was doing, but I just felt that the strategy of adding rules and regulations....was hindering production and limiting people from doing their best.

I saw this quote from Carolla, who I tend to view on a weekly basis and respect the guy because he's generally right about a lot of different things.  He's correct....California has become a difficult place to figure out the future, and if it's worth staying there.
at Saturday, May 16, 2020 No comments:

I sat and watched through the White Press conference for yesterday (15 May).  All of the journalists were oddly wearing masks, and asking their questions via the masks.

Then, as things wrapped up and the conference ended.....with live feed still going for several organizations....off came the masks, and everyone walking around the room, in non-conformist social distancing.

I sat and watched this for about 20 seconds, and just started laughing.

It's all mostly an act, and even the journalists don't grasp how stupid that they appear.
at Saturday, May 16, 2020 No comments: 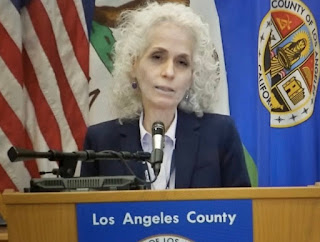 Yeah, she looks a bit unhealthy.  Maybe it's just been a rough week or two.

The problem is that with a brand-name, comes an image and a public perception.  In this case.....she looks unhealthy, so the message is muddled-up.
at Saturday, May 16, 2020 No comments: