The Tests of Plato and Play-Doh

Someone brought this up in a forum, and I'm a bit amazed by it.

Some colleges are fine-tuning their questions on new applicants to the university.  You can't allow just anyone to walk in and sit through forty boring hours of Egyptian history, physical characteristics of beer, or Italian poetry.

So the new question being added is: what does play-doh have to do with Plato (that Greek thinker dude)?

You'd sit there for three minutes and imagine play-doh in one hand, and deep thought-provoking philosophy in the other hand.  It's kinda like mixing Mountain Dew and fine Scotch.  It wasn't meant to be compared.

The true answer?  Well....play-doh is used to describe the shape of things and help the person grasp shape.  Plato's entire thought process is that everything has shape....whether in true form, imaginative form, or fantasy form.  It's a shape thing.

A guy could answer this with three sentences and be done.  A guy could spend four hours and three hundred lines explaining how shapes in doh and thinking.....all meet at some point.

It's a sad state of our current society.....trying to think, ponder, and conclude vast questions in a simple format.

A guy from Bama would look over this mess and offer new questions:

What does the Grand Ole Oprey and Tom Cruise have in common?

What characteristics of the Ford F-150 pick-up lend itself to nuclear fusion?

Whats the true objective of a trucked loaded down with ball bearings and failed brakes?

Is it better to be hit by lightning while under a tree, or on a hill, or by a septic tank?

You see....the whole game to simple old-fashioned university attendance....was that after four lousy years....you left and were better able to think.  You weren't smarter.  You weren't imaginative.  You weren't gifted.  You weren't blessed.  You just had some better sense to think and ponder on some stupid subject.  Yeah, like kinda thinking of play-doh and Plato on serious projects, problems and consequences. 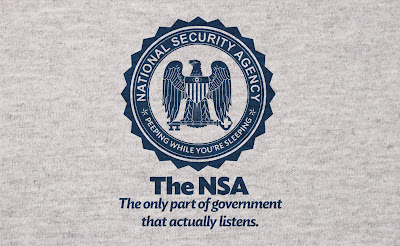 It's an interesting little story.

Some graphic design guy has this idea for a t-shirt.  He takes the NSA logo, puts some words on it, and prints our batches of t-shirts.  He sells them.  He makes a profit.  He gets a cease-and-desist letter from NSA, based on copyright infringement.  He counter-sues.  Case is in court now.

You can see the logo to the right.

The basis of this mess.  Military organizations do an interesting thing when they start out.  They all want logos.  This was true in the 1920s.  It was true during during the Vietnam War era.  It's true with bomber wings, fighter wings, and reconnaissance wings.  It's true with the tank folks.  It's even true with the submariners.  Once they have a logo, they register it and trademark it.  It's theirs....period.

So when anyone.....particularly an artist....acts and uses the basic registered logo.....you will fall into a legal pit.  The registered logo lawyer staff always wins.  In this case, NSA has hired lawyers on the staff, and their legit work in life....is to defend the logo.  It's a sad professional act.....if you think about some lawyer....whose big thrill in life....is defending a logo.  You don't move onto bigger and better jobs with this type of work.

My general advice?  If I were this graphic artist.....I'd toss out the t-shirts and the idea....then start fresh.  Draft up the new 2014 NSA logo for them.  Put up a chicken.....some lightning strikes hitting it on the rear.....maybe dark stormy clouds overhead....and toss on two lines of text.  A new logo for a new organization....mostly fried by public reaction and cast as a bad guy in a sad TV drama with no real ending.
at Tuesday, November 05, 2013 No comments:

The Washington Post published an interesting article over gunshots in DC.  You see....a while back....someone sought technology and found this sensor package called SpotSpotter.

SpotSpotter works in a simple fashion.....it lays out listening pods, and transmits data back to a central computer.  It's there....listening....twenty-four hours a day, seven days a week, 365 days a year.  It tells you the spot and direction of the gunshot.  A cop could.....if he had additional tools like street-light cams, recording devices, and such....pinpoint the area and note all of the car-tags that are seen around that area for the next minute or two.

What SpotSpotter says?  There have been 39,000 gunshots in DC since deployment of the system around eight years ago.  If you do the statistics......figuring an area of six by six miles....an urban area.....no hunting situations....vast anti-gun rules in place.....then you've got a heck of a lot of shooting.

The Post attached an interesting graphic with the article.  The timing of shots is displayed.  It's a curious thing.....from 6AM to 6PM.....there just isn't that many shots being noted by the sensors.  From 8PM to 3AM?  Things pick up drastically, with a peak around midnight for shootings.

I would imagine if you took these statistics and went to Memphis, Birmingham, or Atlanta....you'd find the same trends.  Thugs come out after 10PM and troll the streets looking for trouble.....getting tired around 3AM and heading home.

How many towns across the nation have the sensors?  Not enough....if you ask me.
at Tuesday, November 05, 2013 No comments: