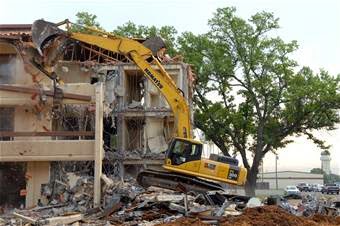 In my twenty-two years in the Air Force.....I lived in six dorms (barracks might be appropriate to use as well).  I actually won't say nothing much negative about five of them.

The Barksdale AFB dorm (in Shreveport)?  This is a shot of the old dorm I lived in (renovation around 1984, after I left).  It was one of the worst places you can imagine before the renovation, and I actually stayed there for roughly two years.

The cooling unit was no longer able to cool.  It was a shocker to survive the two summers I spent there with almost no cooling whatsoever.

The heating unit would only heat to a sufficient level (around 25-degrees).  Anything below that and it just subtracted from the general comfort of the room.  At some point, around minus-five degrees....the room temperature was around 32-degrees. Even the mini-heating unit I bought could barely add ten degrees onto the room, and it'd pop the circuit breaker after thirty minutes of use.

The cockroaches?  In the middle of the night, if you got up and turned on the light.....the one sink in the room would have around a dozen cockroaches scrambling around.  I'd keep a can of lighter fluid nearby and spray them with that.

Mice were a problem on the first floor....luckily, I lived on the third floor.

The water for the showers....if you didn't have a problem with water switching from mild-warm to extreme-cold in the winter months....it was Ok.

The ice storm in January of 1984?  It covered the fire escape entirely and made it impossible to use as an exit.

The natural gas leak in 1982?  It took two days for them to get the gas cleared out and make the dorm safe for usage.

It was the only barracks that I came eventually to hate with a passion.  If I hadn't had orders to leave in January of 1984....I would have said enough and just applied for quarters pay and moved off-base.

From what I can figure....they renovated the place in 1984.....again in the late 1990s, and finally tore the entire building down two or three years ago.

Typically, I strongly recommend a five-day waiting period before people get all hyperactive and think they know the entire episode to some chaotic event.  In this Walter Scott episode.....I can make three observations.

First, this is North Charleston.  Around the 2005/2006 period.....this was considered one of the most dangerous places in the US to walk around. Drugs, gangs, and chaos reigned.  It's a town of 105,000 residents and it was deep into serious trouble.  A decision was made by the city leadership after they saw strong hints of people vacating the area and escaping off to towns around it.  The decision was to build up their police department and get fairly enthusiastic about law enforcement.

The town might have been predominately white twenty-five years ago.....but as the crime escalation started to occur....'white-flight' had already started.  North Charleston had dealt various cards to regain stability and stop the chaos.  Sadly, this meant a higher chance of residents in town (more black than white) getting pulled over for questions or small traffic violations.  Walter Scott could have driven in hundreds of cities and never been pulled over in his entire life.  But North Charleston doesn't have those odds.

Second....Walter Scott was formerly married and owed around $18,000 on back-payments for child support.  Being a warehouse guy and fork-life operator.....he's making next to nothing.  The odds of him ever making enough to cover a regular monthly payment?  Zero.  It's nice that the legal system has invented child support payments.....but it only works if you make enough pay to cover yourself and the payments.

What the guy feared was that the cop would see some warrant for his arrest....arrest him.....and put his one job into jeopardy.  Without that one job.....he's one step away from street-life or living with relatives.  So, when he freaked out.....he had justification to freak out.

Third....I still can't understand the necessity of pulling a gun on a unarmed guy who was running the opposite direction.  If Walter Scott had shown a gun and started running.....maybe there's some justification (marginally, I admit).....but with no gun and running....there is zero justification.  What was the cop thinking in terms of a threat?  There is no threat.  This is the same type of mentality that you'd see when some cop comes to an enclosed yard.....enters....encounters a family dog....and shoots the dog with no logic or reason.

The charges?  It's between murder-in-the-2nd-degree or manslaughter.  In either case, I don't see the jury giving the guy more than fifteen years.  But I don't see this guy surviving in a state prison more than a year or two.  Some gang hit will occur, and this guy will never finish his 'trip' in the state prison.
at Sunday, April 12, 2015 No comments:

For years.....I've been waiting on this to occur.

The British Daily Mail (one of my favorite newspapers) wrote up this piece on a new disorder affecting people.....Orthorexia Nervosa.  It's basically a healthy food disorder.

Yeah......it's when a person has zapped themselves mentally enough....that they crave only fruit and vegetables....no bread....no dairy products....no meats.  So when they get to some stage....they feel all negative and frustrated when they slip up need a piece of bread....negativity goes up in a massive sense.

Has Orthorexia Nervosa made it into the DSM-5.....the handbook/manual that mental health folks use to identify disorders?  The simple answer is no.  This would require a fair amount of surveys, polls and analysis....which is probably several years away from establishing absolute facts.  So, it's a discussed item around mental health experts who have started to see folks who complain about this nervous condition or frustrations surrounding their diet agenda.

Here in Germany, I'd take a guess that one in a hundred folks are already slipping into this disorder.  If you survey the dozen-odd state-run networks....there's probably twenty hours a week of nutritional news or shows.  Some simply key in on how to eat healthy.....cutting out some grease or fat.  But you could see after a while some efforts to maximize on eating healthy.  It'd only take a year or two for someone to repeat their daily habits over and over....reaching the point where it's a food disorder.

The curious thing....no one has said how you treat the disorder.  Teaching people how to eat an unhealthy menu of food?  Forcing people to eat two slices of bacon?  It's hard to say how you'd find some way of treating such a person.

Bottom line?  You might be so successful in life at extending yourself and making yourself believe in good nutrition....that you might harm yourself with frustrations and negativity over such a diet.