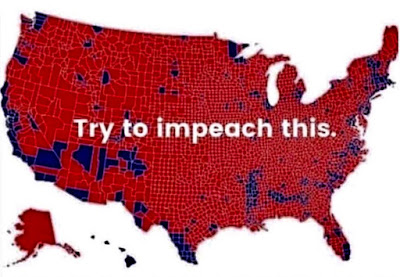 I sat and looked this afternoon at the new Trump 'ad'.

So what Trump is basically saying....with RED making the statement...he's not running against Warren, or Sanders, or Joe Biden.  He intends to run in 3,007 counties and 435 districts.  He's playing the game to take a massive win in the House.

The added issue for Democrats?  You see those blue counties?  They generally have two unique features.....black and Latino voters.

If Trump were to take 50-percent of black male voters (now possible), and half of Latino votes....half of those counties that went to Hillary.....would flip.

A billion dollars in money, and plenty of impeachment chatter to talk about?  He's got a bigger and more bold plan than people imagine.
at Tuesday, October 01, 2019 No comments:

It's an odd five-line story that popped up today.  During the Obama period....2016...the CIA chief...John Brennan, goes and travels to the Ukraine.

But he did this with a fake passport....fake name.  All provided by the State Department.

Who he met?  Unknown.

Reimbursement for the hotel and expenses?  Probably so, but if you asked the CIA to dig this up....it's going to be confidential, and under the fake name.

Well, you don't know.  This is all reading like some Hunter S. Thompson 'James Bond' epic....written while on a booze and weed period while vacationing in Cuba.

What happens if impeachment occurs, and Brennan gets dragged to the stand under oath.  I think he has a story, but what he has to worry about.....it's possible that the Ukraine secret police, or some Russian KGB group....taped his conversation and they've decided to hand the tape to Rudy G, and Rudy has Brennan sitting there and listening after telling his fake story.

You just have to shake your head....a lot of people made decisions that were unwise, and just kept thinking.....no one will ever dig this stuff up.  Yet, here we are.
at Tuesday, October 01, 2019 No comments:

The Thing About the Source and Reliability

One of the ten-thousand little things that I gained out of my two decades in the intelligence field....was this reliability scoring of intelligence.

Years ago, some smart guys sat down and surveyed the human intelligence collection business, and they came up with two categories that you had to view....when you wrote a report.

The first category was source.  The levels went from A (highly reliable), to E (highly unreliable) and F for source unknown.  This meant that you had to have some kind of record with the guy telling you the story.  Maybe he was a guy that you'd known for five years.....maybe he was the coffee shop clerk that had told you five stories over the last year, with only one single story being reliable.

The second category was information reliability.  The levels here went from 1 (confirmed by other sources), to 5 (improbable, meaning you had other sources who told you something different), and 6 being no valid trust (you could prove anything).

Here's the thing.....you always hoped on having a 'A' or 'B' rating on the source, and a minimum of '3' (possible true) on the information.  Things that were 'D4'....were in simple terms....crap. It was worth keeping in a folder because one day....it might lead to a better source and maybe improving this intelligence to B2.

So I look back at this dossier by the CIA guy on Trump.  He's basically telling you something that comes from a dozen-odd sources.  He fails to validate or assign a score to any of them.  Curiously, they all work in the same work environment as him....so you'd think that he'd say they were all 'A' or 'B' on trust. He didn't do that.

Why not score this in some fashion?  My gut feeling is that this is some rookie CIA guy....maybe less than seven years in the service, and probably has never scored HUMINT in any way or shape.

Value of the dossier?  Well, you'd have to out and assign a number of FBI and CIA folks to score the stories, and how reliable they were.  The fact that you were willing to accept second-hand information?  Man, that opens up a whole can of worms, and promises to tie down people for a year or two.  In the end, most of these dossier items are probably going to be a D3 or D4....meaning they might be useless in a court or impeachment process.

This is simply something to sit and ponder upon.

Folks in San Francisco's Mission Dolores neighborhood.....on the NE part of SF....finally got fed up with homeless drug addicts camping out in their neighborhood.  So they put their money up into a bundle and bought these rocks to place along the street and sidewalk....basically to keep tents from being placed.

In the beginning....this worked well in the first couple of days of placement.

So, as you might imagine....the city steps in.  No....the residents didn't ask the city for permission.  Public Works stepped in....upon a city order....to remove the rocks this week.  Why?  Well....an inspector looked at the rocks and said....'they weren't big enough'.  He kinda noted that some of the rocks had been pushed out into the street (yep, they were small enough for several homeless guys to push them around).

What the city says now?  They will do a review and come to two decisions....either 'bigger' rocks or some type of landscaping that prevents tent placement.

So you look at this and shake your head.  The amount of time to review this?  I'll bet on this taking a minimum of one year.  Residents will be shaking their heads because this ought to take less than five days to plan out, purchase the rocks, and place them.

These city planner people will hire some special 'rock-expert' (probably in the $60-per-hour range), who will list out the size and type of rocks to use.  I would imagine that these will all be non-California rocks (coming out of some Minnesota rock quarry and shipped by truck to SF).  Each truckload will probably cost in the $150,000 range to be delivered.  People will be amazed to watch this convoy of forty trucks going across the US....loaded with SF boulders.  Then it'll take a specially-trained team ($40-an-hour for work and members of the boulder-union) to place the rocks, with a rock-certified guy ($90-an-hour for his expertise) to sign off that it was safely placed and secure.

Then as the initial special rocks get put in place....more neighborhoods will demand that they have the same rock placement, and eventually....some rock-department will be created, and bean-count each rock.  Around 2038, someone will discover that over 144,000 boulders now exist in San Francisco.  At that point, the anti-boulder agenda will be started....to cease the boulder epidemic.
at Tuesday, October 01, 2019 No comments: