I know it's hard to believe, but if you assemble the statue by statue list (at least those which were standing prior to 2008)....the vast number were erected by Democratic political figures or Democratic 'groups'.

In northern states, where you find Union statues standing....they were all erected through Republican political figures or Republican 'groups'.

Just something to think about.
at Wednesday, June 03, 2020 No comments:

The Minneapolis Court Episode to Unfold

One of the things which hasn't really been discussed.....if the court case will be held in Minneapolis.

Based on the eruption of violence and chatter....I'd say it's a 99-percent chance that the case will not be heard there.

Once this fact is admitted by the Attorney General....I think various mayors in the state will start to freak out.  You can go down the next three or four significant cities in the state, and find that they will be extremely unhappy.

Chief reason?  If you go through the whole case, and it's a hung jury....that means violence will erupt, and their town will be burnt to the ground.  Even a promise by the governor to bring in 5,000 National Guard troops....won't be enough to assure the community.

To suggest that it'd be in Bimidji?  I'm guessing that 10-percent of the town would pack up and leave for the whole period, and shut down their business operations.

So the five star circus we've seen....is just the start of issues and problems.
at Wednesday, June 03, 2020 No comments:

Some Things to Wonder About

With demonstrations and riots in the mix, just some odd things to pop into my head:

1.  In the metro-cities (Philly, Atlanta, or Chicago for example)....won't all of this lack of respect and lack of authority reset recruitment drives for the police?  Is it possible that one-third of the Minneapolis police will send their resumes out to smaller red-state cities?

2.  Won't price escalation start now with grocery operations in cities like Minneapolis, St Paul, St Louis, NY City, etc?  If I were a trucker, I'd be asking for a $500 daily danger fee to drive within the city limits.  Suddenly, the price of getting 100 cases of Coke would jump by $10 to $15.  Everything would rise by 25-percent in a matter of days.  Shortages of food?  I could ask about that issue and wonder if some truckers will just refuse to deliver anything after 10 AM or unless they have an armed police escort.

3.  Why do these black folks readily accept some privileged leftist white kid in their neighborhood?  Ten years ago, they would have beat the crap out of the kid.

4.  So once you finish a evening of rioting....where do these rich privileged leftist white kids go to sleep?  Seems like no one talks about that.

5.  Level of incompetence of journalists?  That seems to be an obvious problem, and everyone of them seem to think that I will read their material or watch them 'chatter' like 9-year old kids.  The issue....I won't respect them or their marginal stuff.

6.  With all this Corona-exposure on the streets....you'd be thinking in seven days....there ought to be 300,000 folks with the Coronavirus.  If it doesn't happen?  Hmmm.

7.  All these white dimwits on their knees, raising their hands, and asking for forgiveness from blacks?  Very cult-like.  You have to wonder what kind of world they live in, and work in.

8.  This DC Bishop Buddle, from the Episcopal Church on Trump.....probably is more suited to hang out with retirees, sipping coffee, eating crumb cake and pondering over how Moses stumbled his way to four-star success.  Stuck on Trump now?  You'd question how she got this far, but this is the Episcopal Church, and it is a dying church organization.

9.  Loss of tax revenue.  So all these shops that are looted and shut-down.....already damaged by the Corona shutdown....had tax revenue which would be collected.  Nothing now?  So these cities....will they be missing a quarter to half of all tax revenue?  And the states?  It has to be into the tens of billions at this point, which will be missing.  Who will pay for the burnt police cars?
at Wednesday, June 03, 2020 No comments: 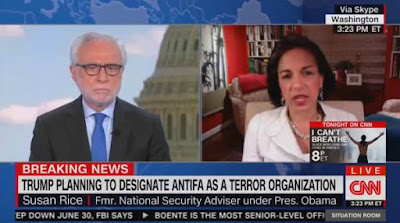 Well....CNN did the big interview with Ms Rice, and she laid out the evidence (actually none).  She just said with a grin....'Russians are at the heart of the riot business'.

If they are involved, then Ms Rice, the best reaction is to openly declare war on Russia and send tanks.  Right?

I'm guessing that she'd suddenly back down and admit there are no Russians involved.

The bothersome part of this is that idiot-Blitzer goes and thinks that Rice has something great to say or contribute.  And what you get is fake-chatter that you'd expect out of a nine-year-old kid.   People sitting there and marginally watching CNN, and just laughing.
at Wednesday, June 03, 2020 No comments:

Just Something You Ought to Know About Fentanyl

For the record, morphine is an awful powerful drug, and typically....you only issue it or prescribe it, when the person is in serious pain/suffering.

So here's the fact....Fentanyl is designed in such a way, in comparison to morphine....to be 100 times the POWER of morphine.  If you were in really bad serious pain, like having three root-canals in one day, or having serious medical procedures done, once that doctor says Fentanyl in the pain-relief, it's a serious matter.

You only want Fentanyl if under a doctor's care, and usually in a clinic or hospital itself.

Why?  There is a very small margin between a therapeutic issued dose, or a doomed-to-die dose.  You wouldn't want Marvin (your local transmission mechanic) to just hand you Fentanyl and swear he knows the right dose.  Nor would you want 'Binky' (your cocaine dealer) to hand you the bag with four doses, and swear he knows all about this stuff.

Overdosing?  Here's the thing, Fentanyl acts in a fairly fast way, and could easily trigger you to stop breathing.  When this moment happens, you need medical professionals around to give you a chance of surviving.  Five to ten minutes of waiting?  That's probably going to guarantee death.

If you were to be seriously out-of-shape, and with high blood pressure?  Maybe in your 20s or 30s....you'd still have decent odds in your favor.  After 40?  The age, the physical shape, the high blood pressure, the Fentanyl, and use of meth in the deal?  Everyday is a 50-50 deal on survival.  Some live and some die.

This Minneapolis dead black guy?  Yep, blood tests done....meth and Fentanyl in the system, and serious health issues.  Plus he was over 40.

The course of things in court?  The lawyer is going to open up a minimum of forty-odd pick-up cases by ambulance crews in the local area....all leading back to meth and Fentanyl.  Death certificates will be put out on the table.  Conviction in this case?  I give it less than a 25-percent of happening.

So all this rioting business....over Fentanyl?  That's the amusing part of the story.  Here's the other funny thing.  Today, across most of the US....a minimum of 500 episodes will occur where cops had to react to a drugged-up guy/gal.....acting funny, and trying to get them on the ground, and using some effort to calm them until the ambulance gets there.  Some will live because of the cops efforts.....some will die waiting on the ambulance. 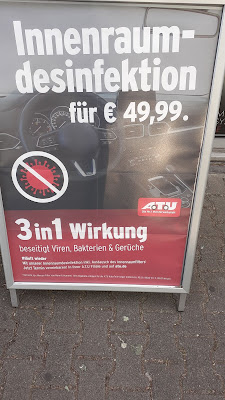 Early this AM, I went down to my local garage, for new summer tires.

I walked in and did my paperwork for the tires, and then asked the 'dude' about the deal.  German guy, 50s, fair to good English.

Basically, whatever the spray is....it kills everything (including ticks and fleas).  Leaves a pleasant oder (he claims).

I turned down the deal but later sent a text message to the wife, if I should reconsider this.  'NO' was the immediate response....don't waste freaking money on this.

Basically, it's probably about $5 worth of some type of Lysol-product, and $15 of actual work-time, with $40 profit.

But here's the thing.....you'd have Gerta walk in and having the car serviced.  She'd get all peppy about this, and worried about people riding in the car with her.  This Corona hype is still going on.  So she'd sign up for this.  And in a month, she'd revisit....worried about more passengers in the car.  They might have a hundred people a month buying this disinfectant business.
at Wednesday, June 03, 2020 No comments: