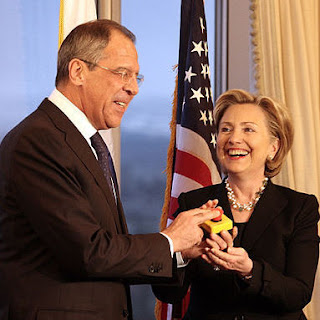 Back in March of 2009, Hillary Clinton, then Secretary of State, arrived in Geneva for a big meeting and presented to the Russian Foreign Minister....a little insider joke....the 'reset button'.

This was supposed to be the signal that the Obama Administration was going to be different from the 'stupid' Bush Administration and rebuild relations with the 'evil' Russians.

To be honest with the Bush Administration....Russia was always on the 50-50 deal.....sometimes a friend...sometimes an enemy.

In some ways, from Nixon on.....the idea was always to use the Russians in some 'theatrical' sense to plus up appearances, or to appear as some 'cowboy in a white hat' against the 'evil land baron'.

This week, everyone is hyped up the evil Russian scenario....because President Trump went by a different script than usual. Most people are sitting there.  They remember the stupid reset-button that Hillary presented.  They get 'bad Russia' stories each month through the news media.  Some stories are probably true.....some fake.

In some ways, I think most Americans are fed up with the 'scripted' storyline over Russia.  Trump just walked in with his own version of the reset button, and the news media freaked out.  If he'd just bought some fake button kit and gave it as a joke to Putin....things would be fine.  Well....people just laugh over that suggestion.

All of this 'evil' talk resembles some Seinfeld episode...a bunch of stuff, about nothing.
at Wednesday, July 18, 2018 No comments: