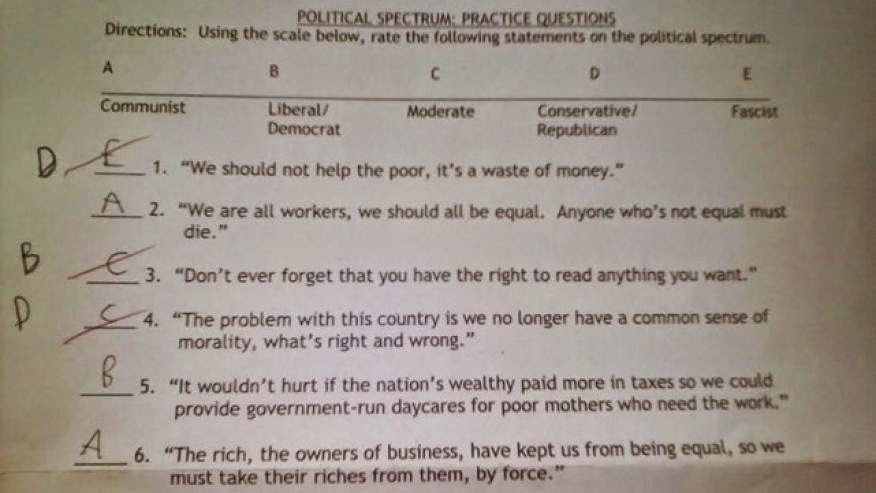 This was a quiz provided in Wisconsin to a high school civics class....in the past month or two.  It was supposed to gear a kid to think and know various political groups.....with a simple sentence attached to each.

The sixteen-year old kid came home....handed the sheet to his mom and asked what exactly was "wrong" and how is this explained.  Well..mom looked over the test and just was a bit shocked.  It's a bogus class exam which tends to push some kid into thinking various positive things or negative things about a political group....remarkably, against the Republicans.

It's hard for me to envision how life would be today in Bama....if I were in some high school history or civics class....and how it would relate to 1975-era education.

I admit....it was almost impossible for our ninth-grade teacher to get across the concept of communism and socialism.  'This is good' and 'this is bad'....as I can remember the class agenda for the early 1970s.  Bad guys were typically communists.....as I can remember the slant of the class.  If you asked any of the twenty-five kids why communists were bad...the answer would have been simply 'memorize' the answers and just get past the quiz......you don't have time to waste on really grasping something.

Teaching the class over Republicans, Democrats or Green politics?  I'd take a guess that you might find six kids out of a hundred today....that might be able to define some explanation....and the rest would ask if this had anything to do with the Civil War, Roman history or dinosaurs.

How important is it to define liberals, conservatives, moderates, Republicans, fascists, dictatorships, communists and such?  To be honest.....if you cornered a hundred folks in some mall....ages eighteen to sixty-five....less than fifty percent could give you a decent description of each.  Some Senators can't even define a fascist or socialist....without getting some note from their handler.  You could drag some PhD dimwit up onto a chat forum....with him giving a ten-minute presentation on the evils of socialism....then discover that he's never been outside of the US in his life....so it's all book material and no real practical knowledge.

I have no idea what the agenda was in this Wisconsin class.  If  I were to speculate.....I'd say the teacher had some agenda given to him or her, and they weren't bright enough to grasp that.  They just used some college-level test that Professor Gus gave them three years ago and think it might be worth reusing for a high-school level exam.

As for the events in this case?  The principal of the school would later tell the mother that this didn't count for any grade, and it appears that the exam will be yanked (never to be used again).....and you get the feeling that they were a bit peeved that this type of stupidity showed up in their school and they have to face some fury over a stupid mistake by a teacher.
at Wednesday, February 11, 2015 No comments: