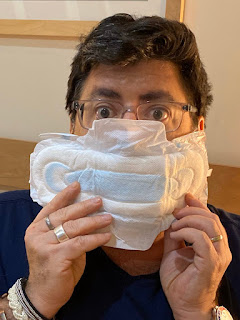 With all the shortage of masks.....I imagined this would come up shortly, and some smart engineer-type guy would do this.  The basic idea?  You go to the store and buy a box of Kotex, and 'string' it.

Now, the obvious question is....are you 'man' enough to wear it in public, and how will this be perceived?  The other problem....in a short amount of time.....guys would be buying boxes and these, and suddenly....you've have a Kotex shortage.

Can you imagine some White House reporter asking Trump if he stop this crisis, and he just grins.....trying not to say anything funny.
at Wednesday, April 22, 2020 No comments:

1.  Any real update or truth to North Korea and Kim's health?

Well, unofficially.....some folks are saying that Kim needed a heart procedure done.  They looked around and virtually no doctor in North Korea had the skills required.  So the story goes that Kim had some Chinese doctor flown in and that guy had some Coronavirus 'bug' going on.

The same folks say that Kim is in some recovery phase, and still alive at this point.

Looking at everything.....it's probably true.  As for what happened to the Chinese doctor after this chaos?  Unknown.

2. Did the Michigan Governor say that abortions are essential because they are 'Life-Sustaining'?

Yeah.....she did kinda say it that way.  There are a hundred ways that you could have said some legit term and avoided looking stupid, but she apparently didn't feel the need to avoid stupidity.

3.  Is it true that some Indonesian authorities are sending quarantine ''breakers" off to a haunted house as punishment?

Well....yeah.  It's not something that Chancellor Merkel or President Trump would do, but it's apparently acceptable there.

Course, no one is saying that it cures people of bad behavior.  I would have just gone and given the guilty party seven doses of some really strong Ex-Lax stuff, and told them to prepare to sit on the toilet for twelve hours.

4.  This effort by Canada and the US....to quietly fund bat-virus stuff in China (done in apparently the Obama years and continued till now)......what's with this?

Well....so far, no one has given any public statement within US channels.  Trump simply said 'what the hell?'   You'd almost sit and think that some CIA fake medical folks were part of the deal, and they helped to bring about a virus there in Wuhan, with fake research.  (Note, no, the CCP didn't pay me to say that.  It's just that this all would make a fine script for a 3-star movie with Dustin Hoffman).

5.  This new Iranian gimmick of solving the Coronavirus....drinking camel urine....is this true?

Well, some Mullah guy came up and said in a public statement (carried on radio) that camel urine cures the situation.  My question would be.....how exactly do you collect this, and does it need to be real fresh or just 12 hours old?

6.  In surveying this 'mail-by-vote' discussion in the US....what's the biggest issue to overcome?

In the status quo of things....the poverty folks would suffer greatly in this mail-by-vote business, because they don't got any mailbox.  (said exactly how a dimwit would say it)

(note: if you think this is stupid, so is the idea of people not having an ID)

7. This new study that says roughly 40-percent of people are NOT showing symptoms of the virus (asymptomatic)....is this a big deal?

Well, here's what you ought to consider.  It could be that 40-percent of people have some natural immunity that shelters them (DNA, diet, vegan-status, heavy shrimp diet, heavy nicotine smoker, wine drinker, etc).  So on top of that....you might have another 30-odd percent who have a marginal display of symptoms (one or two symptoms total).  So from the remainder....it's divided up into mild-virus period, rough-virus period, and 'at-deaths-door' status.

This would really harm the whole doom scenario and reset the whole stage.  It might also explain why Germans haven't had much of a problem.

8. Did the WV governor really say that all this Virus chatter and chaos.....might drive folks to the rural lifestyle?

Yeah, he did say that folks would re-evaluate things, and rural comforts would change people.  Course, if you already live in rural surroundings.....I'm not sure how you would emerge out of the chaos.

9. After Mayor de Blasio of NY City opened up the 'report-on-your-neighbor' tip line.....how did that go?

Some folks were now reporting at the tip-line that they'd seen the mayor (de Blasio) behind some 7-11 on such-and-such street, engaged in lewd behavior.  Pictures of Hitler were sent to the tip line as well.  In simple terms, New Yorkers aren't taking him or his tip line serious.

10.  Is phony empathy now becoming a problem during the virus period?

Lets just be honest.....phony empathy has been around for thousands of years, and if you hadn't grasped that fact until now.....it's your problem.