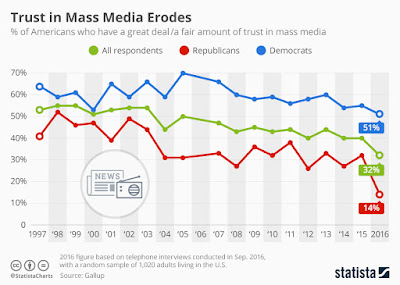 I was sitting and reading over a graphic chart today....a statistical collection over 'trust in the media' between people who are Republicans, Democrats, and Independents.

If you look at the chart....there's some point around 1998 where the bulk (at least 50-percent) of the nation was trusting the media.

By 2012, it's gotten pretty bad.  Less than a third of Republicans still trust the media.  Even from the Democrats, they've dropped down to around 58-percent.

By 2016, the election year....Republicans reached the depth of 14-percent, and barely one-third of Independents can still find trust.  Even half of the Democrats lack trust.

For two-hundred years.....some form of the media....newspapers, radio, television, magazines, or the internet....was able to convey a brand-name message and convince people that they could trust their message.  That doesn't exist anymore.

I went looking for comparable numbers in Europe.  The latest trend? Radio is about the only media left where 59-percent of the public has a trust in the message.  The written-media?  They dip down to 46-percent.

What happens in 2020 and the next election?  If this trends holds on, then the brand-name news and slant that would usually affect an election....will be in serious trouble.  Added to this 'misery'....the fake shock that the news media has to project when their message isn't bought by the public.

All of this would bring me to question how things will work in 2024 (likely the end of the Trump era), and how both political parties can survive in this new era.
at Monday, April 30, 2018 No comments:

After looking at about three minutes of the White House Press Association from the weekend, and the insult-comedy laid out by Michelle Wolf....I'd generally say that it was gutter-humor where 50-percent of an audience would typically walk out.

The problem is that a fair number of people from beyond the urbanized areas of the nation....will sit and watch the piece, then start shaking their heads.  It's mostly insults.  In terms of humor....it's lacking.

An affect on the 2019 association dinner?  I'll go and take a humble guess that they have some problems in selling tickets next year, and roughly 25-percent of those who showed up this year.....won't be there next year.

Journalists who go and defend Wolf?  Well...it's another reason why people don't watch your brand of news anymore.
at Monday, April 30, 2018 No comments: