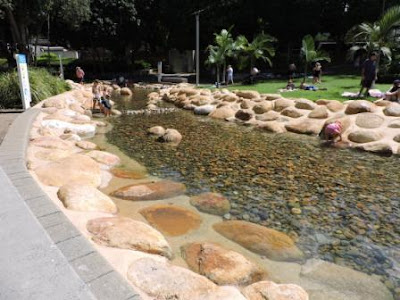 On my Australia trip.....I came to this infrastructure project in Brisbane, which some folks ought to copy in major urban areas of the US.

There's a man-made spring which runs through this park....probably a thousand feet long.

Kids play around in it (it's probably not more than six inches deep).  It goes into a pool area and then gets pushed back up to the starting point.

Why Hillary Got Stupid

For a number of months, this whole e-mail thing simply didn't make sense to me.  Then I sat down and really thought about it.

There was Plan A, which was dirt-simple....after getting the State Department job wrapped up at the Democratic Convention....the inner circle of Hillarys made this wise decision.  They would ensure that after four years....she'd walk away, and no idiot would be to touch her emails while in this significant job.

Hillary would be able to later claim she just know the rules, and this would allow her to sanitize her emails so the public wouldn't read everything.

My humble guess is that after she walked away....two or three members of the inner circle sat down for three weeks and breezed through 20,000 emails that she received or sent over a four-year period.  It would be a crappy job, but you'd be looking for certain topics that just weren't going to be allowed in a public situation.

All of this would have worked....had they stayed on plan "A".  A month away from taking the job....probably around late November....she sent the people's names over to Obama's team that she was bringing in.  Sid Blumenthal was on the list.  The Obama team said "no".

Why was Sid on the list?  When you look at her resume....she is the weakest individual to hold the job in 100 years.  Sid was there to guide her....read messages....and offer advice.  Without Sid, she was not going to successfully carry out the job.

So, a month later....she tried to hire Sid again....as a contractor. That failed too.

So, Sid was hired by the Clinton Foundation.  But here's this new problem.....Sid holds NO security clearance.  How would Sid read the messages and be able to do his secret job?  So the inner circle told members of the office to occasionally cut and paste classified onto the messages sent to the unclassified Hillary personal account.  1,700 total messages that are a problem now.

All of this episode now.....created by the fact that the White house simply did not want Sid Bllumenthal around, with a security clearance.  In a way.....they scripted this and knew precisely what she would be doing.

If they had hired Sid....she would have stuck with plan "A", and this mess presently would be a minor deal, with almost no FBI involvement.  Now?  I don't see how the President allows this to continue on without some charges coming up.

In a way, it's amusing.  Here was a job that Hillary Clinton was absolutely unqualified for and it would normally make no sense to hire her.  Yet, things fell into place and all she had to do for four years was fake people out.....get Sid to advise on what to say or do.....and it'd all pay off in the end.  If she'd never gone to plan "B" on usage of the email server.....she'd be easily doing well and might be able to run a serious election.
at Sunday, March 13, 2016 No comments:

I sat yesterday and watched the video of Trump dodging at the rally, with Secret Service agents protecting him, and taking down some guy charging the stage area.

For some reason, the guy's image and name stuck with me.  So this morning, I went studying up on this young guy.

He's a college student....at Wright University (a public college in Dayton).  Field of study?  Theater.  Yeah, it'll be a money-maker in life....I'm sure.

The guy's theme?  He says he wants to be a Martyr.

Martyrs are typically people who will stand up in some crowd (they rarely do this in some anonymous way).....then let everyone know that they are willing to suffer persecution and possibly death for taking on the bad guys, the thugs, the government, the church, or such.

This typically goes along with the idea that you refuse to accept something or go along with a cause.  Naturally, the fact that you have a cause on your side, and some counter-Martyr might exist to Martyr themselves against your persecution....well, it doesn't look good.

Being a Martyr typically meant hero status.  You were the guy who died in some fight or got executed by the bad guys.  In Greece.....they'd throw up a big statue on a side-street and write some weepy words on how you were a great Martyr.  In Germany from the 1970s and the anti-establishment period.....there are so many Martyrs that they can't even keep track of who did what or what evil establishment thugs they suffered under.

In Tommy Dimassimo's case?  The cops arrested him.....took him off to jail.....did some charges....then allowed the guy to get bailed out.  Judge so-and-so will get the case and probably have some court appearance in thirty-odd days with Tommy.

Tommy will meet with some lawyer.....probably hired by his Mom or Dad.  The lawyer will tell Tommy that guilty Martyrs end up in a Dayton jail.  That will be several weeks of hanging around druggies, serious criminals, and thugs.  It's not a pleasant Martyr environment.

So, he'll urge Tommy to be humble....be nice.....be open to maybe a mental exam or beg for mercy with the judge.  Tommy will be in disbelief......he thought that Martyrs got some pat on the back or such.

Eventually, Tommy's parents will ask if he's been doing dope or drinking too much because they don't believe anyone would be stupid to rush some stage and take on Secret Service agents.  It may even be the case that Dad is a Trump-enthusiast, and he'll have harsh words with the son over his stupidity.

Twenty years into the future.....someone will walk into a Dayton bowling alley and find some guy handling the front desk.....and ask....aren't you Thomas Dimassimo, the guy who rushed Trump in Dayton.  Yeah.....will be the response.  What happened to you....why the bowling alley?

There'll be some slow response, and finally Thomas will admit.....the Martyr thing didn't really pay off.  You don't get resume points for that.  So other than two goofy monster movies where he played the number six character, or the TV ad for the local quickly lube shop.....things didn't go that well.

Maybe I'm wrong about this and there's some great future here for the kid.  But typically, Martyrs only get a big name or statue.....if they were buried five days later.
at Sunday, March 13, 2016 No comments: